The Barna polling group recently released a “State of the Church 2020” report on Christian trends in worship. Ideal blog material! Let’s get fisky.

Churchgoing is a dynamic part of U.S. society. New research from Barna Group shows the ways in which Americans are maintaining—and renegotiating—their connections with the churches that they attend. The State of the Church 2020 study is a year-long examination of the spiritual and religious trends that define American life these days.

Link here but I’ll stay with this article:

State of the Church

Definitions first, always a good idea when dealing with polls.

Practicing Christians – A subset of all churched adults, are those who attend at least monthly and who say their faith is very important in their life today. This more committed group comprises about 25 percent and 63.5 million adults.

Churched adults – Those Americans who have attended a Christian church at least once in the last six months. This represents the broadest group of adults who have experienced a church service in recent months, representing about 49 percent or 124.4 million adults.

David Kinnaman, president of Barna, comments on the importance of these two groups: “In the first case, we’re talking about those who are the most church savvy adults. In the second, we’re looking at all of those adults who are reasonably familiar with the experience of churchgoing. To use a comparison from the world of sports, it’d be the difference between looking at the ardent supporters and the entire fan base, including the raving fans.”

In this article, we’ll examine five trends that are essential in understanding the Church’s place in the U.S. today.

Interestingly, church hoppers are just as likely as more loyal attenders to report weekly attendance. In other words, just because they select from a handful of different churches to attend doesn’t make them any less likely to actually attend church on any given weekend.

Also, those who “hop around” don’t do so as a routine part of their churchgoing in a given month, but typically attend another church occasionally.

Methinks broken families have a lot to do with this. Enough churches are online that one need not physically attend a favorite but more distant church if the closer one is sufficient.

2. Churchgoers are divided on the value of church.

Another element of the churchgoing landscape is the paradoxical perceptions that churchgoers hold of church itself. Kinnaman observes, “Those who frequent worship services do so largely because of personal enjoyment, but many churchgoers also readily admit that they believe people are tired of church as usual.”

The chart leaves me indifferent. Meeting with fellow Christians is a duty but that doesn’t necessarily include physical-church attendance. It’s a good habit and should be enjoyable within reason. I would have liked to see a distinct “for the free child care” option.

3. Churchgoers largely experience—and have come to expect—positive emotions and outcomes by going to church.

Overall, churched adults say they leave worship services feeling inspired (37%), encouraged (37%), forgiven (34%), as though they have connected with God or experienced his presence (33%) and challenged to change something in their life (26%), every time. A plurality of churched adults also express always feeling like attending service was the most important experience they had all week (29%) and that they learned something new (28%). …

These findings ultimately reveal that attendees encounter and even anticipate a range of emotional connectivity during worship services—which can further complicate the job of those behind the pulpit. Kinnaman states, “We must emphasize the reality that, week in and week out, today’s church leaders are tasked with meeting a diverse set of emotional expectations.”

Leading by emotion has got to be the worst idea in management theory history. There are basically three Church functions: ritual, worship and teaching. Worship is the only one that really needs to concern itself with da feelz.

Ideally, devotion to God should lead to church attendance, not vice versa. In fact, that “vice versa” could explains much about modern church outreach efforts: getting warm bodies to attend in hopes that they’ll “feel the presence of God” when they look at the pastor’s trendy haircut. ‘You Are Welcome Here!’ 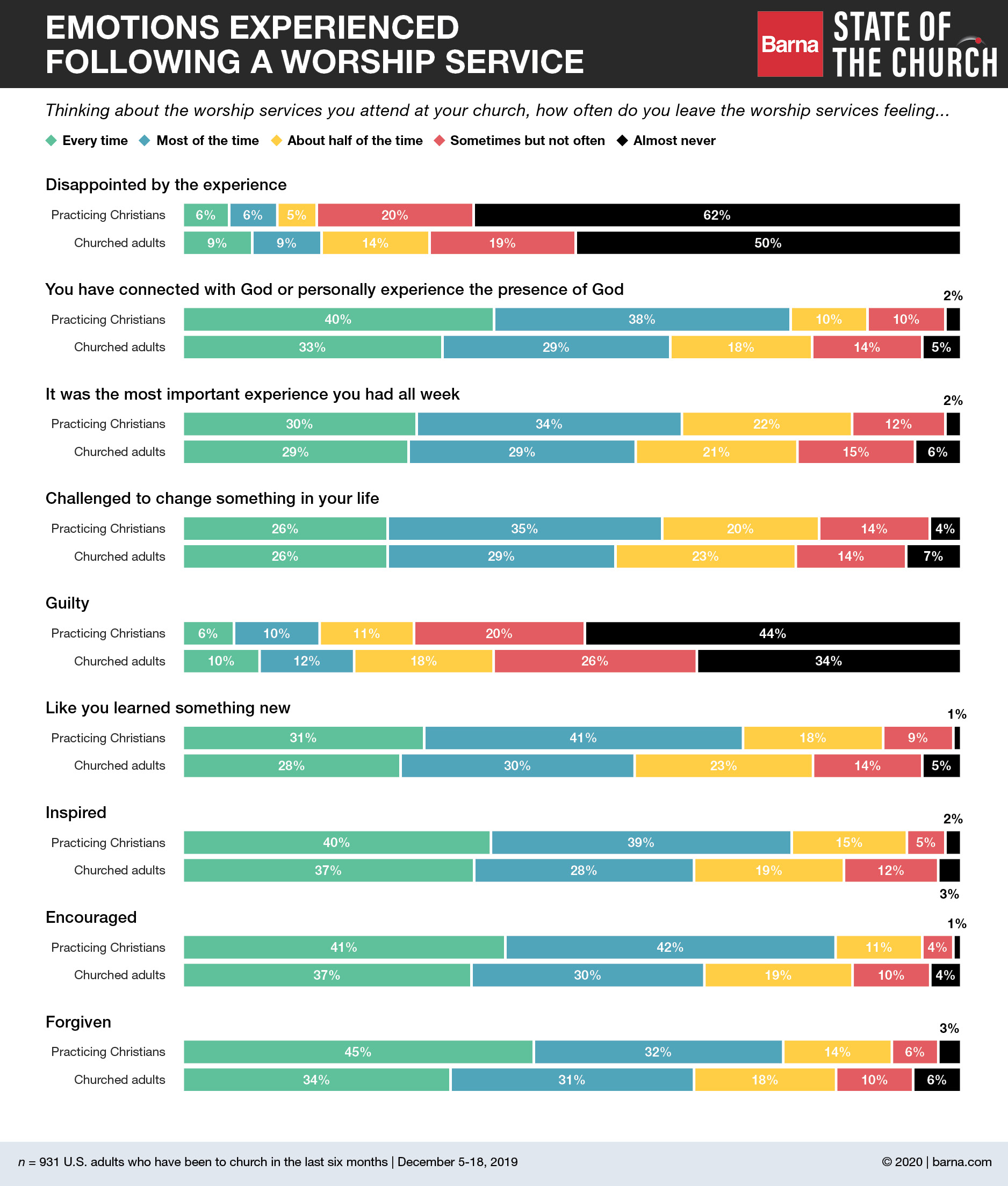 Interesting that the “guilty” percentage corresponds nearly 1:1 with “forgiven”.

4. Church membership is still a common practice and is correlated with positive outcomes—but its importance is declining among younger churchgoers.

Church commitment extends beyond just finding your pew (or cushioned seat or folding chair). Further, plenty of congregations measure commitment beyond just a willingness to dress in Sunday best…

…and greet the pastor outside the doors each week.

Methinks that the “pastor at the exit door” habit is one the Church really needs to move away from. It’s a terrible way for clergy to get to know the peanut gallery.

A common and more formal next step is church membership—and this new Barna study shows that many Christians are reluctant to embrace it. To what extent is membership relevant today?

Of those who attend church at least every six months, a little over half (54%) report being an official member at their place of worship, with just above one in three (37%) reporting they regularly attend but are not members. Practicing Christians, expectedly, show deeper commitment, with seven in 10 (71%) noting they are members and one in four (26%) claiming regular attendance without membership.

Surprisingly, no significant differences emerged in membership rates between denominations—whether mainline or non-mainline, Protestant or Catholic. However, a different story emerges when looking across the generations. Boomers are more likely than both Gen X and Millennials to be formal members of their congregation, with nearly seven in 10 churched Boomers (68% vs. 48% churched Millennials and 51% churched Gen X) confirming membership. Younger generations of churchgoers were also more likely to mention “not applicable,” which suggests that the category of membership isn’t even part of their church’s nomenclature.

Emphasis theirs. That’s the drum I keep beating on: the reason younger people, particular Gen X, aren’t participating more in church is because the Baby Boomers have a death grip on the reins of power. I’ve attended such geriatric churches that the sermon was interrupted out by the beeping of life support monitors.

No surprise if the Baby Boomers have finally dispensed with even pretenses of meaningful membership in the churches they run.

Kinnaman comments, “Americans aren’t joining much of anything these days and church membership is not as compelling as it once was. In a world of untethered commitments and free-for-all content, the positive correlations of church membership should not be overlooked. The form of membership may be undergoing change, but the function of generating a mutually committed group of people is still highly relevant to today’s Americans.”

Exactly what my perspective predicts. We still want to worship God but church is where we are permitted only to warm a pew and pay our dues. For some people, that’s enough, and the worship boy-band might easily be of professional skill.

5. The perception of the Church’s relevance to the community is under question—especially among non-Christians.

I’ll tell you what non-Christians think of the Church. I heard it fresh from a couple atheist friends just last week. They think Christians are such hypocrites that their God cannot possibly exist, because if Jesus was real then He wouldn’t tolerate the followers He’s attracted. But they still think there’s a God or God-like force out there.

I did not defend Christ’s honor. I did not know how to. Frankly, I mostly agreed with them… and I’m a Bible-thumping zealot for Jesus!

That’s why I have so much anger bottled up against the modern Church. People I care about can’t hear the Gospel because of the meaningless behavior of churches generally and the examples set by Christian leaders specifically. That is unacceptable. 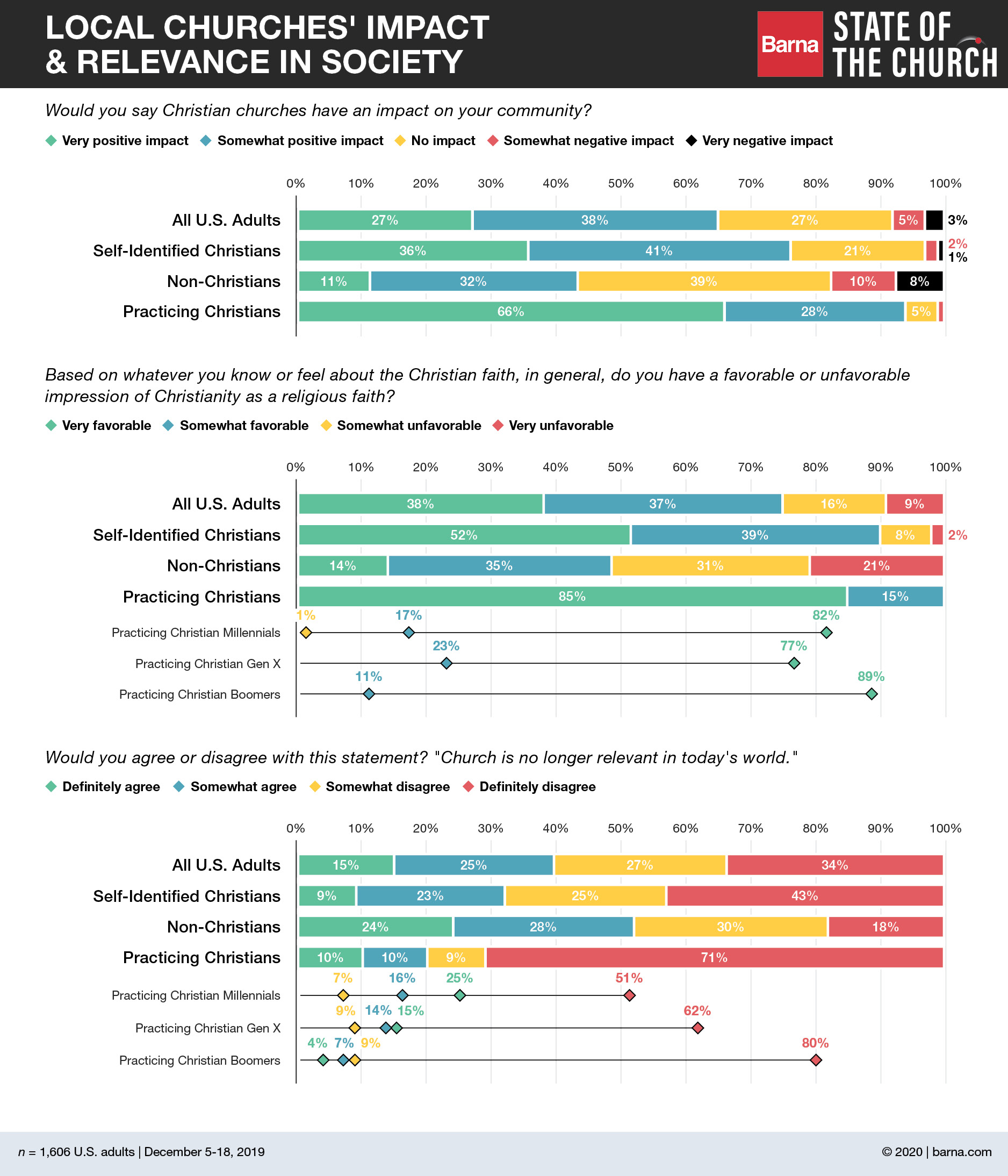 That non-Christians have a mildly negative view of Christianity is a very bad sign. It should be strongly negative. I long for the days when atheists everywhere sneer at Christ in frustration that His followers keep forcing God’s laws upon their bodies. No abortion for you!

There is no worse insult against the Church than unbelievers not caring what it does. I close with a picture of why that’s true.

Steep decline in practicing Christians will have major repercussions for church leaders: study

“Monthly, committed churchgoers are now about half as common as they were two decades ago,” he said. “This shift has major repercussions for church leaders as there is increased struggle to attract and retain the active segment of churchgoers.”

The findings are part of the State of the Church 2020 study, a year-long examination of the spiritual and religious trends that define American life these days. …

“What redefines and what anchors the churchgoing, Bible reading and prayer of adults? Among the interesting stories in the data is that private practices of faith—such as prayer and Scripture intake—aren’t sliding as much as church attendance,” he said.

That’s Convergence in Church leadership. The Pope ain’t Catholic and the Baptists are getting in touch with their Muslim side.

Tim Lucas, pastor of Liquid Church in Parsippany, New Jersey, told The Christian Post that amid a “record rise” of the religious “nones,” the church would do well to rethink the way it presents the message of the Gospel.

One wonders how far out of her way the author of this piece went to find this pastor. No matter; I take all comers.

“I think the hand-wringing approach to millenials and Gen Z is an invitation for a wholesale reinvention of the methods by which we present Jesus to a new generation,” he said.

Our methods cannot be reinvented. Preach Christ crucified & resurrected. Teach one another His principles. Bear the burdens He has assigned you in life and follow His example. There is no other way to avoid eternal punishment for the evils you’ve done.

“There’s a cultural shift underway, where young people are extremely experientially oriented. They want to know, ‘What’s the social good in this before I buy it? So the church’s traditional message of evangelism was propositional truth: Here’s why Christianity is valid and a superior belief system. The Good News was proclaimed and explained.”

However, when Jesus shared the “Gospel of grace with truly hell-bent pagans,” He adopted a “double approach,” Lucas argued.

Yes. He took a whip to their backsides and insulted their parentage so effectively that history STILL echoes with the Son of Man’s disses. Whitewashed tombs! Pit of vipers! Ye be no sons of Abraham!

“There was a demonstration of grace: Be healed, serve the poor. And then there’s the proclamation of the Gospel: Your sins are forgiven,” he said. “Up and coming generations are concerned with biblical justice — how the church tangibly helps the poor and needy. It’s a reverse discipleship process. The church must reclaim its birthright of saying, ‘The message of the Gospel is good for both the soul and body.’”

“He who loves his life will lose it, and he who hates his life in this world will receive life eternal.”-Jesus, John 12:25

That, folks, is why non-Christians don’t give a care about the Church. It’s reinvented itself as a social welfare NGO redundant with the Department of Health and Human Services. Because morbidly obese North America is overrun with starving children!

I can tell from his haircut alone that Tim Lucas knows less about morality than an inmate. Ye be no son of Abraham, Timmy Boy!