Making good on my predictions of Social Justice and Convergence, Greear has recently hosted a dialogue with an unrepentant Muslim to find common ground and encourage Christians to become comfortable accommodating the wishes of unbelievers. Since I didn’t have the transcript, I fisked two articles instead of one.

Infiltration and convergence often takes the form of a two-step con. Normalize evil and criminalize good. That is the form of Greear’s assault upon the Church. The criminalizing good is being done with his pogrom against church independence, in the guise of preventing more sexual assaults by clergy. This event is the former: normalizing evil.

Omar is an imam & activist who boasts of receiving invitations to public functions from Barack Obama & Nancy Pelosi and has a long history of anti-Semitism (including divestment) before he scrubbed it off the Internet around 2014.

Greear serves as pastor of The Summit Church in Durham, N.C., and president of the Southern Baptist Convention. Suleiman is a professor at Southern Methodist University in Dallas, Texas, and founder of the Yaqeen Institute for Islamic Research.
The event, “Hope in the Current Age: A Conversation on Christianity and Islam,” was sponsored by a coalition of faith-based organizations, including The Veritas Forum and Neighborly Faith, along with NCSU’s Muslim Student Association, CRU and Intervarsity groups.

Greear and Suleiman covered topics such as religious freedom, civility amid religious differences and how to convey a message of hope in the current age.

Such a carefully neutral description. Fuck hope. Have some faith instead, Greear. Faith in Christ who had much to say about sheep and wolves.

“We need to be able to not only get along with, but to cherish, stand alongside and even fight for people that believe different things than we do,” Greear said.

Why? Why should a Christian risk as much as a hangnail for an unrepentant Muslim? Why should we Christians forward the agenda of international Islam? I’ll give just one reason in passing why we SHOULDN’T: 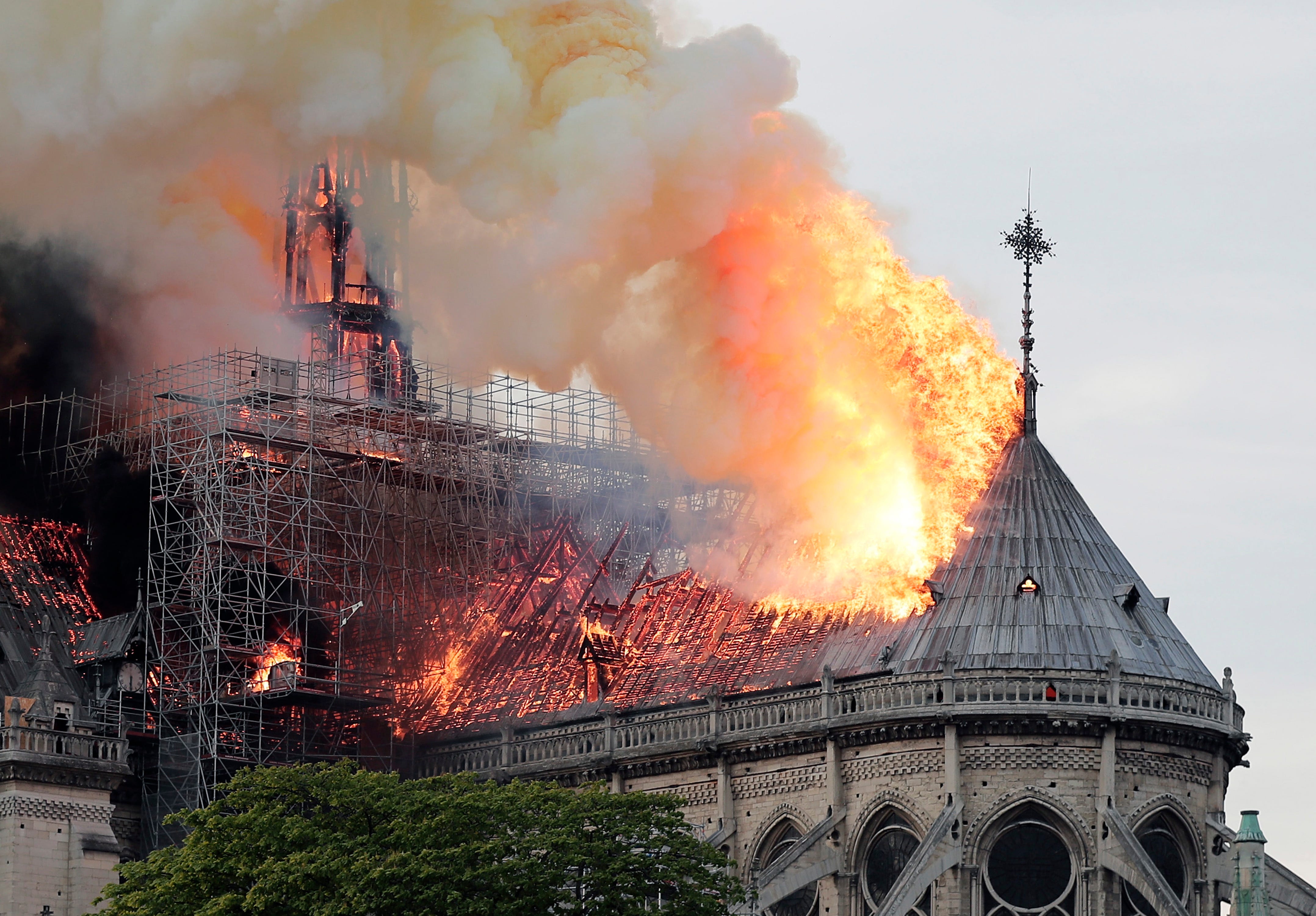 “It’s a lot harder to hate and stigmatize somebody when you’re looking people in the face that you call friends,” said Greear.

This is the “normalize evil” half of the Convergence two-step I mentioned. Pressure Christians to befriend Muslims, associate with them extensively, emotionally invest in them, and then when the Muzzies start broadcasting their calls to prayer at 50,000 watts across the community, Christians will feel bad about standing their ground and avoiding Europe’s fate.

He’s leveraging the preexisting Cult Of Nice. An example:

Talk of civility and compassion appeared to resonate with the crowd, as attendees nodded in agreement. Three Muslim students were murdered in nearby Chapel Hill almost five years ago. One of the victims was a student at NCSU. The killing sparked debate about anti-Muslim bigotry as prosecutors argued the shooter was a fueled by hate.

I looked it up. That was not a religious hate crime.

On February 10, 2015, local police in Chapel Hill, North Carolina, responded to a report of gunshots heard at 5:15 p.m. Upon arriving at the Finley Forest Condominiums, located on Summerwalk Circle at Chapel Hill, a woman told them a friend was bleeding, and directed them to a condominium. There, they found Barakat lying dead in the front doorway bleeding from the head. One of the Abu-Salha sisters was found dead in the kitchen, with the other lying in the doorway of that room. All three victims had been killed with gunshot wounds to the head, and were pronounced dead at the scene.

In June 2019 it was reported that Deah Barakat had recorded the encounter with Hicks on his cellphone camera. The recording shows Hicks complaining that Barakat and the Abu-Salha sisters were taking more parking spaces than the condo rules allow, before Hicks opens fire with his gun.

A hate crime? Okay, but not one that’s at all relevant to a discussion of religious freedom.

The victims’ neighbor, Craig Stephen Hicks, a 46-year-old former car parts salesman, turned himself in to sheriff’s deputies in nearby Pittsboro on the night of the shooting. He was in possession of a .357-caliber handgun at the time. Investigators later positively matched the handgun’s ballistics to the shell casings found in the apartment.

An open-and-shut case. Hicks had a long history of violence and was reportedly fascinated with the movie Falling Down. Synopsis, a divorced DOD contractor loses his job and has nothing left to live for except getting across Los Angeles to see his daughter on her birthday one last time, in violation of a restraining order. It’s a very dark comedy; think Office Space but with gang murders and no happy ending.

The guy had anger management issues for real. Why then, was the story presented as “anti-Muslim bigotry”? Because Christian America is such a kind, peaceful place that Omar could only find fault with us by lying.

So, he lied. Lies are just some words spoken to unlock victory, right? Islam granting its followers permission to lie and deceive in order to advance the cause of Islam is a great reason to not bother with events like this one.

Suleiman talked about hopelessness and expressed concern for the coming months in U.S. politics.

“Things get really bad for Muslims in election years,” he said, lamenting that “cheap talking points are used against our community.”

I don’t wonder that a Muslim has Trump Derangement Syndrome, now that Trump has allied himself with the Orthodox Jews and garnered lots of support for throttling back on Muslim migration into USA.

God, I wish the whole “da J00z” thing would just go away. I want my country back! I do not want to expend valuable brain cells reprocessing ancient, unsolvable Gordian knots of Middle Eastern blood feuds. Which is another damn fine reason to not allow immigration, ESPECIALLY “refugee” immigration from regions that haven’t known peace or trust since before Mohammed raped a child.

Greear said a “posture of fear” may lead some Christians to look upon outsiders with suspicion and “rationalize the faults” of politicians offering political protection to the Christian community.

That “rationalize the faults” bit is, again, anti-Trumpism. The Democrats been trying to drive a wedge between POTUS and Christians so much that I hear their arguments verbatim from the guys I hang out with.

News flash, Greear, Christians aren’t “rationalizing Trump’s faults” when we support him. He is simply not hostile to us. He kinda likes America and is okay with its continued existence as a sovereign nation. I guess that counts as “offering political protection”? He’s better than what Bernie Sanders or Hillary Clinton would do to us. But the way Democrats talk, one would think Jesus mandated a theocracy!

Theocracy is what Islam does. The irony isn’t funny.

Greear referenced his time spent as a missionary in a Muslim-majority region and said, “We love you. We think you belong in this society and we want to stand beside you to be your friends.”

I hate Islam. God, I hate them. They flood into my country with the blessing of the globalists, at my taxpaying expense, and the both of them lust for my destruction. They lie to my face time and again about being nice and peaceful and loving and it’s a total coincidence that every God-damned single time Muzzies take control of the government, at any level, churches burn and Christians are butchered. How stupid do they think I am?

“We want you to be patient with us and help us learn what it looks like to look at life through your eyes,” said Greear. “Most of us have never had the experience of being in a place where we weren’t in the majority, and that’s a difficult transition for us to make.”

You will burn in Eternal Hell for your hatred of Christ, Greear. For your wish to make us Christians a minority in our own country. You scumbag! You agent of Islam!

Zero respondents who identified with either faith group said they felt less positive about the other group or less interested in friendships across religious lines.

Singer told the Biblical Recorder the survey results were encouraging.

I see a lot of bias in that polling but note that increased acceptance of Muslims, and by extension Islam, was the official goal of this event. 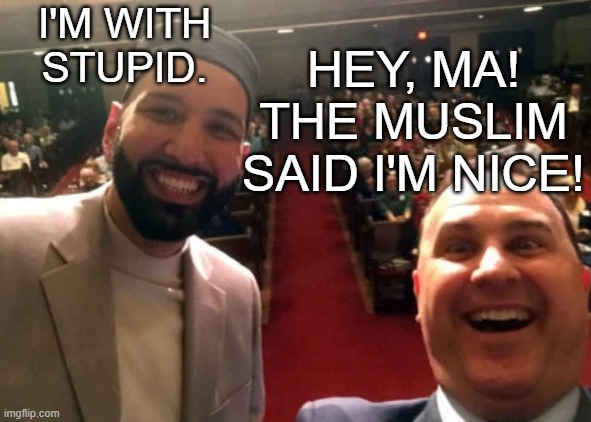 Omar on the left, Reverend Andy Stoker of Dallas’ First Methodist Church on right. And if you thought that was scary… 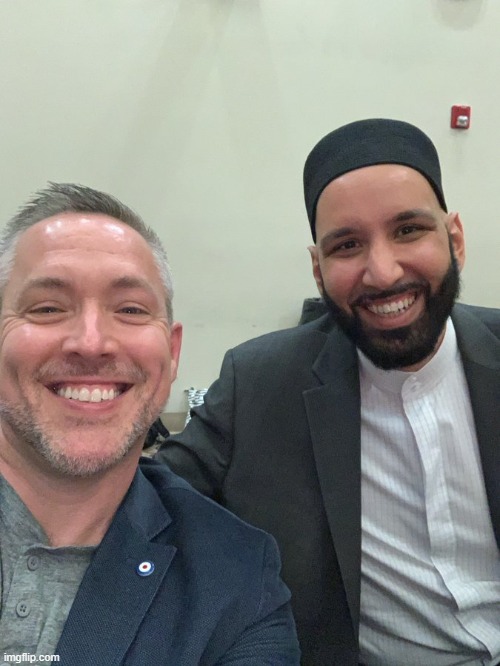 That’s J.D. Greear himself with Omar. I don’t know if his eyes or his smile is more disturbing.

Most of the attendees will be deeply conservative evangelical students who likely have never held a conversation with a Muslim before and do not have Muslim friends, Singer noted.

“They probably don’t know how to have a mutually beneficial conversation with a Muslim in a way that feels faithful, so we’re hoping to show a model of charitable discourse that maintains conviction,” he said.

Being on a Southern campus, Singer said, the event may end up addressing some “cultural notions about Islam within the Christian faith and in this particular region.”

Yes, there aren’t many Muslims in the Carolinas yet, which is why they’ve focused on colonizing the universities thus far… trying to win influence before the reality of having Muzzie neighbors sets in.

Suleiman told RNS he feels well-equipped to address such misconceptions: Having grown up in New Orleans and now living in Dallas, where he teaches Islamic studies at Southern Methodist University and often meets with evangelical leaders both in public and in private, Suleiman says he is intimately acquainted with Southern church life.

ISLAM HAS NOTHING TO TEACH US CHRISTIANS. NOTHING. The Prophet is the only religious leader I’ve ever heard of who could not be bothered to practice the very religion he preached. That’s pathetic. And his follower is teaching in a Christian seminary? Equally pathetic and for the same reason.

A prominent activist for civil rights and interfaith issues who is known for denouncing extremism, Suleiman has faced hostility from multiple sides, including threats from the Islamic State group. Commentators from the Christian right such as pastor Robert Jeffress have criticized him, as well.

The link to Jeffress didn’t actually contain his criticism of Omar. A cursory search only turned up the Jerusalem Post complaining of his anti-Semitism and I guess they’d be the ones to know. For myself, I’m satisfied that Omar is an activist for interfaith issues. There’s no chance that somebody fitting that term is an honorable, trustworthy guy.

Suleiman said he hopes the minority of Muslim students in the audience will glean something from the conversation, too.

“A lot of times we shy away from spaces where we think we won’t be welcomed in the fullness of ourselves as Muslims, but if we speak to the beautiful themes in our religion then that will resonate with people,” he said. “If we want to be bridge builders, we need to be consistent in our call for bridge building. We can’t only build bridges with people we’re comfortable with. We have to get over this apprehension that if we talk to people that we don’t agree with on everything, then we’ll lose what makes us unique as Muslims.”

So far as I’ve been able to read, Omar never talked about Muslims acting on behalf on Team Jesus. “If we speak to the beautiful themes in our religion then they’ll let their guard down.”