To them, the Constitution is nothing but an obsolete roadblock to Progress, to be done away with By Any Means Necessary. Old News, but their admitting it publicly is New News.

For most of the twenty-first century, the world’s oldest surviving democracy has been led by a chief executive who received fewer votes than his opponent in an election for the position. The first of these executives started a war based on false pretenses that killed hundreds of thousands of civilians. The second — a serial abuser of women who hired as his campaign manager a lobbyist for violent dictatorships — authorized an immigration policy that forcibly separated migrant children from their families and indefinitely detained them in facilities described as “concentration camps.”

A promising start… torpedoing any possibility of credulous idiots to believe this is a legit work of jurisprudence. I especially like how this partisan hack STILL can’t accuse Trump of doing bad himself despite having finally been impeached of… um… something something about Hunter Biden selling American influence to foreign nations. Although I shouldn’t underestimate credulous idiots. They cling to their guns but not their children.

Democracy, as they say, is messy.

But even when democracy is messy, a society’s commitment to the endeavor rests on the belief that giving power to the people is appropriate and fair. Recent events have highlighted some of the ways in which federal elections in the United States are profoundly undemocratic and, thus, profoundly unfair.

False equation of democracy with fairness. Democracy is two wolves and a sheep voting on lunch.

The Electoral College — when it contravenes the popular vote — is an obvious example of this unfairness. But it is just one of the mathematically undemocratic features in the Constitution. Equal representation of states in the Senate, for example, gives citizens of low-population states undue influence in Congress. Conversely, American citizens residing in U.S. territories have no meaningful representation in Congress or the Electoral College.

The main reason for this article is explaining why the American federal government is set up the way it is. Lots of people don’t understand the concept of the Electoral College. The answer is simple and Christian: people are easily manipulated sheep. God knew it, America’s Founders knew it and even Tommy Lee Jones knew it in “Men In Black”: 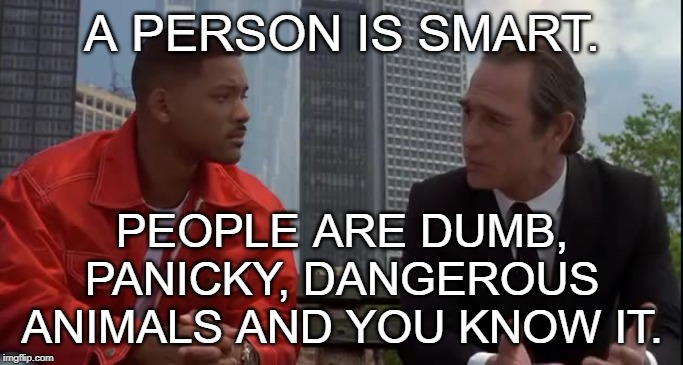 Thus, the idea of parceling out voting by area and not headcount. It prevents mob psychology from being the deciding factor in elections.

That, folks, is why Socialists love democracy. It’s easy to stay in power when you buy votes with tax revenue. In other words, when you feed the parasites the bread of producers.

One notices that the author didn’t go on to mention that human rights are derived from our Creator.

..then it is time to amend the Constitution to ensure that all votes are treated equally. Just as it was unfair to exclude women and minorities from the franchise, so too is it unfair to weight votes differently. The 600,000 residents of Wyoming and the 40,000,000 residents of California should not be represented by the same number of senators.

When it was written, the populous states wanted to leverage their population to control the Federal government. The less populous states, understandably, refused to agree to that. The solution was the two houses of Congress which cannot act independently.

Harvard Law wants to destroy the Senate entirely so that Wyoming will be ruled by California with no representation in the government.

Nor should some citizens get to vote for President, while others do not. Any rationalization of the status quo must adopt the famous Orwellian farce: “All animals are equal but some animals are more equal than others.”

Equality is a lie that the Founders never taught. We are not equal, Harvard Lawyer. You, an enemy of the America system of government, are unfit to be allowed a vote. No wonder you want to extend voting privileges to convicted felons, when you are a pre-convicted felon yourself!

These observations are not new, and they were noted well before the Constitution was ratified. During the Constitutional Convention, delegates from small states refused to accept a system of representation by population. Likewise today, the faction that benefits from the unfair allocation of power has no interest in changing it. Article V of the Constitution requires supermajorities to amend the Constitution, so pragmatists [America-hating Socialists] have been reduced to advocating meager solutions: perhaps Congress could admit Washington, D.C., as a state; maybe Puerto Rico too, if we’re really feeling ambitious.

While a step in the right direction, these proposals are inadequate. To create a system where every vote counts equally, the Constitution must be amended. To do this, Congress should pass legislation reducing the size of Washington, D.C., to an area encompassing only a few core federal buildings and then admit the rest of the District’s 127 neighborhoods as states. These states — which could be added with a simple congressional majority — would add enough votes in Congress to ratify four amendments: (1) a transfer of the Senate’s power to a body that represents citizens equally; (2) an expansion of the House so that all citizens are represented in equal-sized districts; (3) a replacement of the Electoral College with a popular vote; and (4) a modification of the Constitution’s amendment process that would ensure future amendments are ratified by states representing most Americans.

This is blatant insurrection against our legitimate government.

It’s also a great idea. We should divide Wyoming into 40,000 states so that California becomes voiceless in the Senate! It’s what Harvard calls democracy!

Radical as this proposal may sound, it is no more radical than a nominally democratic system of government that gives citizens widely disproportionate voting power depending on where they live. The people should not tolerate a system that is manifestly unfair; they should instead fight fire with fire, and use the unfair provisions of the Constitution to create a better system.

I weep with frustration, that monsters such as this author can be bred in broad daylight with no fear of justice.

Gunning Bedford, a delegate from Delaware, warned that if representation were based on population, large states might “crush the small ones” in Congress. But as James Madison noted, that risk is minimal, because large states do not inherently have anything in common that would bring them together for such purposes. The only issue that would reliably divide small and large states is the very question of how to allocate power among them.

James Madison made that comment in the context of a Federal government limited to its original purpose of international relations and a couple infrastructure purposes, for example a common currency. His opinion is obviously no longer relevant.

Note that there’s no reason for such a limited government to represent every specific individual person in the nation.

Luther Martin, of Maryland, also argued that because the federal government was a confederation of equally “sovereign and free” states, each should be considered an equal contracting party. But again, this view is not especially compelling. As Pennsylvania delegate James Wilson wryly inquired: “Can we forget for whom we are forming a government? Is it for men, or for the imaginary beings called states?”

The Federal government was for the states, which were not imaginary beings. Anybody who thinks the state is imaginary will be surprised when he defies it.

States do not have interests independent of the people who live in them, so equal numbers of people ought to be entitled to an equal number of representatives.

THAT IS SUCH A LIE! Hello, Deep State!

Moreover, while it was at least plausible at the time to argue that the federal government was a creature of sovereign states, today the federal government is intimately involved with individual lives in a way that would have been unimaginable to those in the Founding era. If the federal government can levy personal income taxes, change the definition of marriage, and penalize the failure to purchase health insurance, shouldn’t the people whose lives depend on those decisions be entitled to equal representation?

No, the Federal government should be arrested and imprisoned for disobedience to the restrictions placed upon its power.

U.S. Territories. — The problem of unequal representation is especially severe for citizens of U.S. territories. Such citizens pay payroll taxes but, with few exceptions, are not eligible for Supplemental Security Income. Nor are the territories reimbursed for Medicaid at the same rate as states.

Here, he complains that US Territories aren’t sufficiently parasitic. This is a problem for him because democracy won’t help him if he doesn’t create as many parasites as possible.

4. The President. — The practical effects of an Electoral College that contravenes the will of the people are perhaps self-evident but still worth mentioning. Whereas in the early republic, the President had more modest duties, the modern presidency has transformed into the most powerful office in the world.

Presidents have the power to shape history for better or worse. It makes little sense to allow an antiquated, unfair system of representation — a system that does not work as intended.

The system IS working EXACTLY as intended, hence this author’s frustration with the system. The author even gives a helpful example:

For most of American history, it was relatively rare for a bill to pass the Senate without support from senators representing the majority of Americans. Most votes passed with around two-thirds of the Senate in favor, with those senators representing two-thirds of the population. While this extraordinary arrangement may not be permanent, with the Republican party relying on white, rural voters — typical residents in many of the smallest-population states — it is likely to repeat with increasing frequency.

This situation is happening because the Socialists have succeeded in turning major population centers in parasite mounds of paid voters. The Senate is preventing the strong from ruling over the weak… exactly the reason it was originally designed.

Considered in isolation, unequal methods of representation may not seem like a problem. The Senate alone has very little authority. It cannot pass legislation without the House, and it cannot confirm appointments unless the President has made one. A somewhat unfair element of government seems tolerable when it is just one part of a grand scheme. But as shown previously, the problem of unequal representation is embedded in each part of the government. Neither the House, the Senate, the presidency, nor the Supreme Court is accountable to the citizenry on a one-person, one-vote basis.

AS INTENDED BY THE FOUNDERS.

Says the guy whose concept of democracy depends upon voters financially dependent upon the State for survival.

…had views about voting rights that are fundamentally incompatible with modern democracy. Just because something is in the Constitution doesn’t mean it can’t, or shouldn’t, be reevaluated.

What Harvard Law wants is not what the Founders wanted America to be, nor is it the American tradition developed over two centuries… although to his credit, he did note the illegalities of the Civil War Reconstruction Amendments (as an example to be followed).

This paper’s author and the university that supports it are literal Enemies Of the State.

2 thoughts on “Harvard Law Demands the Death Of the Constitution”