A thought I had while commenting at Soviet Men deserves expanding upon. I don’t have my usual hard proof of what I’m about to propose but it fits perfectly.

This story made the rounds last month:

WASHINGTON (JTA) — President Donald Trump posted on his Twitter feed a poll that purports to show overwhelming support for him among Orthodox Jews.

“The Exclusive Ami Magazine Poll, What Orthodox Jews really think about President Trump,” said the tweet posted Wednesday, with a link to the poll.

The poll shows 91 percent of respondents oppose impeaching Trump and that 89 percent approve of how he is doing his job.

For context, 51% of Orthodox Jews reported voting for Trump in 2016. Statistically, that means complete indifference.

Ami said its polling company reached 723 Orthodox Jews in 15 states between Nov. 22 and Dec. 6 on cell phones and landlines. It did not name the polling company, nor did it say how the respondents were selected. It also did not provide the criteria Ami, a Haredi Orthodox publication, set for determining if someone was Orthodox, although it said both Modern and Haredi Orthodox Jews were canvassed; nor did it name a margin of error.

Trump has chafed at his lack of popularity among Jewish voters, who in polls have overwhelmingly disapproved of his job performance.

…And the Orthodox Jews publicly reported their people approving of Trump.

Now, let’s think about this. What would the atheist Jews do when they see the Other Team cozying up with the de facto kingmaker of the world? They would poison that friendly relationship.

New surveillance video appears to show another anti-Semitic attack in New York City, at least the 13th since December 23. The footage shows a 22-year-old Hasidic Jewish man defending himself before a 24-year-old woman punched him in the neck.

Starting eleven days after the poll went public. The timing sounds right to organize this kind of thing.

One witness said the attacker yelled anti-Semitic slurs, CBS News correspondent Don Dahler reports. Two women were arrested in connection with the incident and one of them has been charged with assault.

The attack, which happened in Williamsburg, a Brooklyn neighborhood, on New Year’s Day, is being investigated as a hate crime.

“They took him and threw him down to the ground and broke his phone,” said Moses Weiser, a Williamsburg resident. “It’s unbelievable what’s going on. This is a shame.”

How’s that female empowerment working out?

The incident came on the same day that New York Governor Andrew Cuomo visited Brooklyn in a show of support for the Jewish community there and directed police across the state to increase patrols in Orthodox neighborhoods.

“Everybody stands in solidarity with you,” Cuomo said.

The NYPD on Wednesday released new surveillance video of another anti-Semitic attack in Brooklyn last week, which shows a group of people strike a 23-year-old Hasidic man over the head with a chair and punch him in the face. Police now believe the group may also be connected to an attack on a 56-year-old Hasidic man in the same neighborhood, which security cameras captured earlier that day.

It’s grainy. Not worth linking.

The latest attack also comes on the heels of the stabbing that wounded five people at a Hanukkah gathering in Monsey, New York, last week. The family of one of the victims, 71-year-old Josef Neumann, said he will likely have permanent brain damage, and if he recovers, he could be partially paralyzed for the rest of his life.

The recent violence did not stop celebrations at Brooklyn’s Barclays Center or MetLife Stadium in New Jersey Wednesday, where more than 90,000 people, including New Jersey Governor Phil Murphy, gathered to finish a seven-and-a half-year study of the Talmud, a vast collection of writings which discuss and guide Jewish law.

Only the Orthodox Jews are being affected by this and only in NYC so far [okay, one case in Jersey City], which fits perfectly with atheist Jews wanting to demonstrate that Trump won’t protect his new Orthodox buddies. The attackers, at least initially, have been Black Hebrews or some such.

So, that’s my theory. The atheist Jews are going to war against the Orthodox to break the Trump-Orthodox axis of Orange Hair.

Of course, not all hate crimes against Jews are legit. Here’s one for the funny files… proof that Jews are their own worst enemy:

He told police he was stabbed for being Jewish. Then his Apple Watch caught him in a lie.

A 26-year-old man faked his own stabbing at the West Bloomfield synagogue where he worked and then reported he was attacked because of his Jewish faith, authorities say.

Now Sean Samitt is facing a felony charge of filing a false police report, according to West Bloomfield Police.

Samitt was arrested on Dec. 20 and arraigned the same day before Magistrate Julie Nelson-Klein at the 48th District Court in Oakland Country on one count of falsely reporting a felony, a crime punishable up to four years. According to authorities, his $7,500 bond was posted by Samitt’s mother.

Bail is typically 10% of the bond value. Samitt didn’t have $800 to his name at age 26? Somebody’s been bleeding his heart on Patreon too much.

On Thursday, he appeared at the 48th District Court for a probable cause hearing. He is expected to appear for the preliminary examination on Jan. 14.

Samit reported he was attacked and stabbed in the abdomen by an unknown man in the parking lot at the Temple Kol Ami, where he worked as a cantorial soloist, which is a music director.

He reported the crime on Dec. 15, telling police that he was confronted about 7 p.m. as he was leaving work by a white male in his late 30s to early 40s.

Samitt said that the alleged attacker shouted, “You Jews!” and said “too many immigrants are here,” according to the police report obtained by the Free Press through a Freedom of Information Act request.

Invoking the FOIA means Samitt’s (((peers))) tried to hush up the crime with the support of local police. Most ethnic groups don’t close ranks to protect their bad apples… that’s the real crime here.

Samitt told officers that he was punched in the chest and abdomen during the encounter and he feared for his life, the report said. He said he escaped by kneeing the attacker in the groin and pushing him away, then drove himself to Henry Ford Hospital where a security staff called local authorities about the attack. 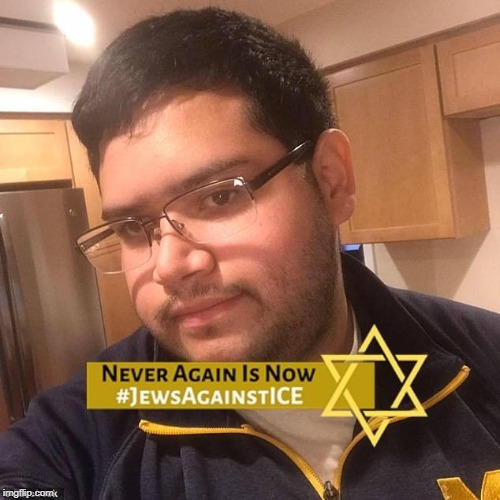 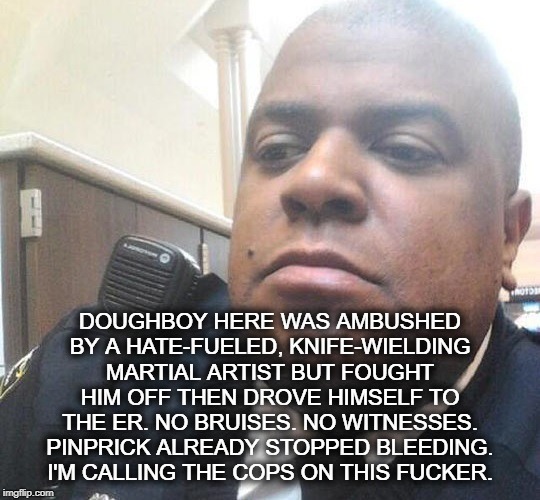 Police said officers searched the parking lot for a weapon, blood or any other piece of evidence but came back negative. K-9 officers were not able to locate a scent on the suspect.

While searching Temple Kol Ami, detectives found bloody tissues in Samitt’s office and the men’s bathroom. They also located a knife in the kitchen area with blood on the tip of the blade.

How deep did this SJW’s determination go? One-eighth of an inch.

Suspecting Samitt’s wounds were self-inflicted, officers obtained surveillance footage from a house across the street and confirmed that no assault took place.

Police said Samitt admitted to making up the attack and said he lost consciousness and accidentally stabbed himself while he was washing dishes at the synagogue. He said he lied about the incident because he was being harassed at work about his medical condition.

That’s what I would do if I unexpectedly blacked out while washing dishes. I would drive myself to the ER, hoping to not black out again while driving, and tell the cops a Nazi attacked me.

The second story also turned out to be fabricated, police said.

Officers were able to obtain information from Samitt’s cellphone health application that was synced to his Apple Watch, confirming he did not lose consciousness. Samitt then admitted to intentionally stabbing himself.

“I put the knife in to see like just how deep it went because I wasn’t really sure then in the process I probably dug it in a little more.”

He told police he wanted out of his contract with Temple Kol Ami and this was his way out.

Then why did he let Mom make bail? Jail is the perfect excuse to skip work! You can sit back and watch television all day.

Temple Kol Ami Executive Director Cheryl Friendman told police that Samitt had been an employee for about 1½ years.

A member of the synagogue told the Free Press, “Sean resigned on Dec. 16 and there is no other information.”

When contacted by the Free Press, the Jewish Community Center of Metro Detroit would only say it takes these matters very seriously.

“We are so very grateful for our law enforcement in Detroit who takes every hate crime seriously,” Assistant Executive Director Heidi Budaj said. “We are fortunate to have a partnership with West Bloomfield Township Police who acts to keep our community safe.”

By hiding their people’s crimes until the Freedom Of Information Act gets invoked. And then they wonder why ever more people don’t trust them.

“We are very disturbed to hear of incidents like these. Not only is it a crime to file a false police report, but those who commit such acts take vital resources away from the folks who need help from law enforcement, said Carolyn Normandin, Regional Director of Anti Defamation League Michigan. “At a time when we are fighting real anti-Semitism, falsifying reports is destructive and we strongly condemn such acts.”

According to the ADL, a false case “could have a detrimental impact on those actual victims of bias crimes who seek justice in the future.”

Their motive for the attempted cover-up. This is exactly why I despise identity politics, because honesty becomes less valuable than solidarity.

Samitt’s false report occurred in the same month of two major anti-Semitic attacks in the U.S.

One thought on “Why Jews Are Being Attacked in New York”