After the fun fat-shaming of last post, I perused Teen Vogue Magazine for more blog material… and found out what Eddie’s been up to with his Presidential pardon in-hand. He’s a supermodel! 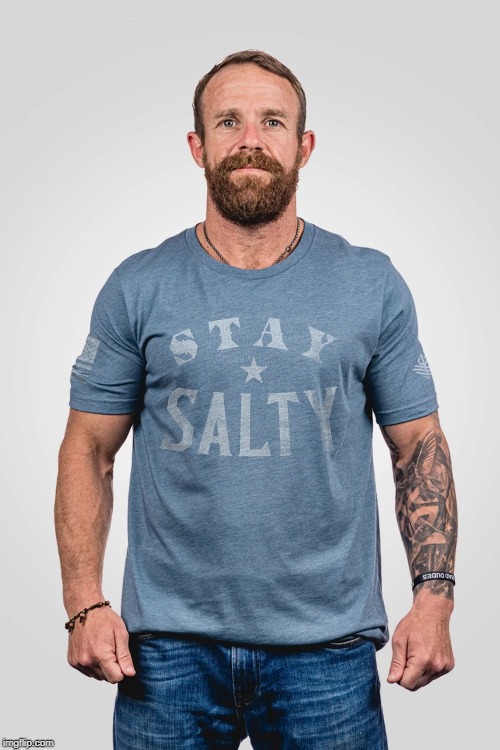 Nine Line SFG is a coastal lifestyle brand with an edge. SFG provides functional, versatile, and affordable apparel solutions for your next outdoor adventure with specialty garments flexible enough for a fishing trip at sea or a weekend afternoon on the range.

“I was afforded the opportunity to work with both NLA and BRCC to help promote our collaborative line with Nine Line “Salty Frog Gear”. These two veteran owned companies set the bar for brotherhood and showing the country it’s not just a statement but a way of life.” -Eddie Gallagher

BRCC is Black Rifle Coffee Company. I’ve been seeing their name come up, too. In the coming years, I hope the veteran community has room for a few good men who never enlisted.

Former Navy SEAL Eddie Gallagher has been out of combat for years but is still fighting to retain the honor and rank he earned during his decorated 20-year career in the elite fighting force.

Gallagher was charged with the murder of an ISIS fighter and unfairly singled out for the lesser charge of taking a photo with the body of the fighter, despite most of his platoon taking part as well. As a result of the charges, he was unlawfully detained, denied medical treatment for traumatic brain injury, saw his wife and family publicly ridiculed, and was spied on by corrupt attorneys.

In July, he was acquitted of murder, but the photo charge has remained, leaving Gallagher with a reduced rank, a criminal record, and a huge chunk missing from his lifetime pension as a result. …

Regarding his case, Eddie said he had been personally prosecuted because some of the guys in his platoon didn’t like his mission-focused, no “bullshit” style. The military “establishment” in the form of NCIS had a goal to take down a Navy SEAL, so they crafted a prosecution before the investigation had even begun.

Both Eddie and Andrea agreed there was an eerie similarity to the way President Trump has been treated by the Washington establishment, and perhaps that’s why President Trump took a particular interest in Gallagher’s case.

But Andrea noted the issue is greater than just one person or one case, and believes all of this is being directed by a much higher power.

Turns out to have been a slightly lower power, SECNAV Richard Spencer. Hmm, what’s HE been doing in retirement?

Richard Spencer: I was fired as Navy secretary. Here’s what I’ve learned because of it.

Spencer is nursing his butthurt on WaPo while Gallagher teamed up with friends to make money and spend it! There is a God of justice after all!

The case of Chief Petty Officer Edward Gallagher, a Navy SEAL who was charged with multiple war crimes before being convicted of a single lesser charge earlier this year, was troubling enough before things became even more troubling over the past few weeks. The trail of events that led to me being fired as secretary of the Navy is marked with lessons for me and for the nation.

It is highly irregular for a secretary to become deeply involved in most personnel matters. Normally, military justice works best when senior leadership stays far away. A system that prevents command influence is what separates our armed forces from others. Our system of military justice has helped build the world’s most powerful navy; good leaders get promoted, bad ones get moved out, and criminals are punished.

[Editor’s note: Richard Spencer is the former secretary of the Navy.]

Seriously, that was the first line in the article. I don’t think WaPo will be picking up Spencer for a war correspondent.

Earlier this year, Gallagher was formally charged with more than a dozen criminal acts, including premeditated murder, which occurred during his eighth deployment overseas. He was tried in a military court in San Diego and acquitted in July of all charges, except one count of wrongfully posing for photographs with the body of a dead Islamic State fighter. The jury sentenced him to four months, the maximum possible; because he had served that amount of time waiting for trial, he was released.

President Trump involved himself in the case almost from the start. Before the trial began, in March, I received two calls from the president asking me to lift Gallagher’s confinement in a Navy brig; I pushed back twice, because the presiding judge, acting on information about the accused’s conduct, had decided that confinement was important. Eventually, the president ordered me to have him transferred to the equivalent of an enlisted barracks. I came to believe that Trump’s interest in the case stemmed partly from the way the defendant’s lawyers and others had worked to keep it front and center in the media.

Dumbass told his boss No twice.

After the verdict was delivered, the Navy’s normal process wasn’t finished. Gallagher had voluntarily submitted his request to retire. In his case, there were three questions: Would he be permitted to retire at the rank of chief, which is also known as an E-7? (The jury had said he should be busted to an E-6, a demotion.) The second was: Should he be allowed to leave the service with an “honorable” or “general under honorable” discharge? And a third: Should he be able to keep his Trident pin, the medal all SEALs wear and treasure as members of an elite force?

You preemptively told your boss to fuck off because you didn’t want him to overrule you again?

This was a shocking and unprecedented intervention in a low-level review. It was also a reminder that the president has very little understanding of what it means to be in the military, to fight ethically or to be governed by a uniform set of rules and practices.

DEEP STATE CONFIRMED! Spencer admits to having a problem with Constitution-mandated civilian oversight of the armed forces. This is the DEFINITION of a Deep State, bureaucrats trying to rule without the interference of lawful authority.

Given my desire to resolve a festering issue, I tried to find a way that would prevent the president from further involvement while trying all avenues to get Gallagher’s file in front of a peer-review board. Why? The Naval Special Warfare community owns the Trident pin, not the secretary of the Navy, not the defense secretary, not even the president. If the review board concluded that Gallagher deserved to keep it, so be it.

You cut your boss out of the loop in open defiance of his chief of staff’s repeated reminder that he wanted to remain involved?

I also began to work without personally consulting Defense Secretary Mark T. Esper on every step. That was, I see in retrospect, a mistake for which I am solely responsible.

You cut BOTH your bosses out of the loop because they didn’t like what you were doing? “In retrospect, I am responsible for that mistake.”

The next day, the Navy established a review board to decide the status of Gallagher’s Trident pin. According to long-standing procedure, a group of four senior enlisted SEALs would rule on the question. This was critical: It would be Gallagher’s peers managing their own community. The senior enlisted ranks in our services are the foundation of good order and discipline.

The same peers that had accused him of serious crimes, of which Eddie had just been exonerated? 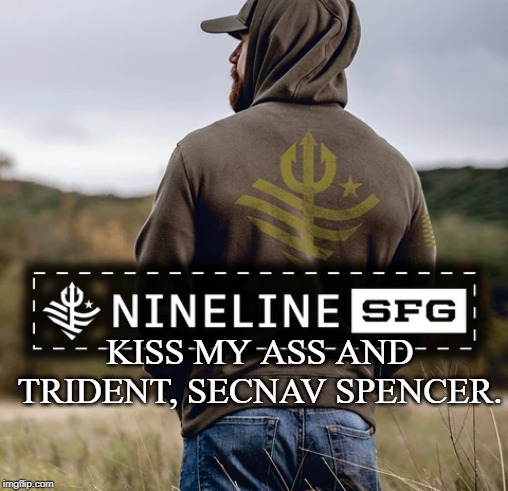 But the question was quickly made moot: On Nov. 21, the president tweeted that Gallagher would be allowed to keep his pin — Trump’s third intervention in the case. I recognized that the tweet revealed the president’s intent. But I did not believe it to be an official order, chiefly because every action taken by the president in the case so far had either been a verbal or written command.

How is a tweet neither verbal nor written? Oh, but it wasn’t a COMMAND, it’s was just Trump saying what he wanted his subordinates to do. “Sorry, Mister President, you didn’t say Simon Says! That means I get to defy you!”

I hope Spencer goes back to preschool for retirement. He deserves a second chance.

The rest is history.

We must now move on and learn from what has transpired.

Who is this “we”, Kemosabe?

The public should know that we have extensive screening procedures in place to assess the health and well-being of our forces. But we must keep fine-tuning those procedures to prevent a case such as this one from happening again.

More importantly, Americans need to know that 99.9 percent of our uniformed members always have, always are and always will make the right decision. Our allies need to know that we remain a force for good, and to please bear with us as we move through this moment in time.

Methinks his allies are not America’s allies.

Which turned out to be a full pardon plus an ass-kicking of those reponsible.

…the Gallaghers are united behind a new mission to be advocates for veterans, and call on all patriots to strengthen their brotherhood and to always be their brother’s keeper.

They’ve formed a powerful collaboration with Nine Line Apparel, one of the fastest-growing veteran-owned brands in the nation.

Eddie had met Tyler Merritt, Nine Line’s CEO, in passing once on deployment, but had no idea how their lives would later become linked.

When Eddie’s case first became public, Andrea said Tyler and Nine Line showed up almost out of the blue to support him, and were with him every step of the way. Eddie said when his family was in distress, Nine Line was there to help, and speak up for him when no else would.

“They treated us like gold,” Eddie said, “and opened my eyes that the brotherhood goes on. Nine Line and Black Rifle are vets taking care of vets.”

“To top it off, they came up with the idea of a brand and to create a partnership,” Eddie added referring to Nine Line’s newest exclusive line of apparel, Salty Frog Gear (SFG).

The company describes Nine Line SFG as “a coastal lifestyle brand with an edge. With specialty garments flexible enough for a fishing trip at sea or a weekend afternoon on the range, SFG provides functional, versatile, and affordable apparel solutions for your next outdoor adventure.”

“I was afforded the opportunity to work with both Nine Line Apparel and Black Rifle Coffee Company to help promote our collaborative line with Nine Line “Salty Frog Gear.” These two veteran-owned companies set the bar for brotherhood.” 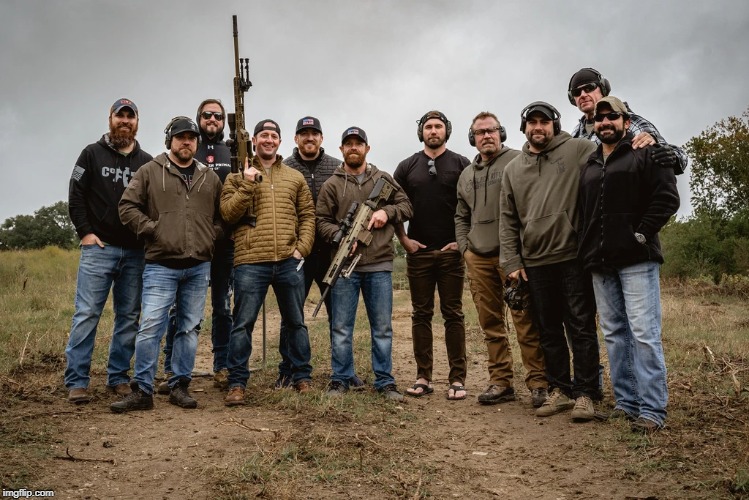