I waited to cover the Pensacola shooter because it showed every indication of becoming a circus: other Arabs found behaving suspiciously, Saudi Arabia refusing to cooperate with investigations, the most powerful military in the world is so scared of its own troops that our domestic bases are frigging gun-free zones! And not even Trump cares to correct that!

Enough time has passed to conclude that this was a kookie run amok, and all the background scandals are just the screeching of social justice vampires being exposed to daylight. Fortunately, the kookie in question is interesting! 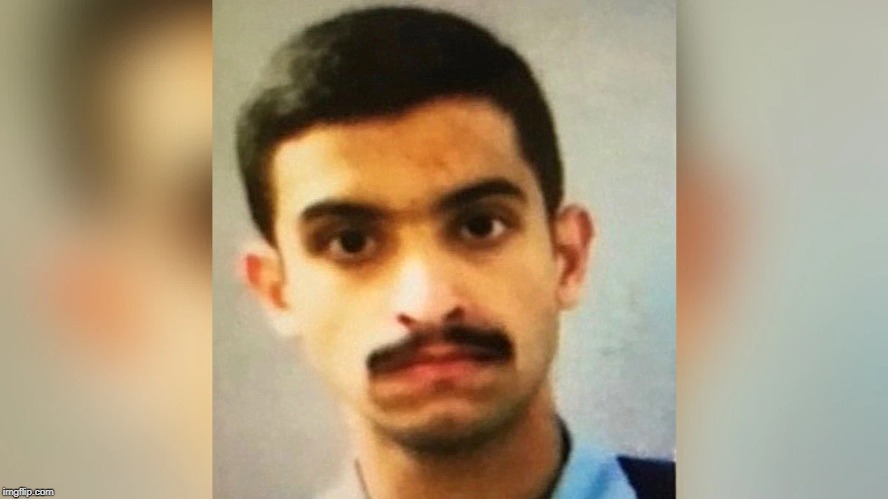 Sampan eyes, white underneath. That and his nationality definitely make him the kind of foreigner I would bring into my country, hand a rifle to and teach the skills to reenact 9/11. The tops of his ears are turned out, suggesting he wears glasses a lot. Wide mouth means he likes to talk, consistent with slightly-rounded eyebrows indicating a balance between rational & social towards other people. The nose might suggest a poor general attitude but no pic had sufficient detail to be sure.

The mustache indicates he’s a pornography film actor. Okay, okay, that’s not true. OR IS IT? Because that’s where his nickname came from!

Recap from heavy.com; dangit, the links didn’t get re-copied! I’m too lazy.

An active shooter who was a Saudi national opened fire in a classroom building at Naval Air Station in Pensacola, Florida, killing three people and wounding eight more. The gunman is now dead, according to the Escambia County Sheriff’s Department. Authorities described the horrific scene as looking “like a movie,” but it was all too real. The shooter was identified as Mohammed Saeed Alshamrani.

According to The New York Times, the gunman has been identified as a Saudi national. He was an aviation student, who served in the Saudi Air Force according to The Associated Press, which added that “military from around the globe” are at Pensacola NAS for training.

*twitch* A Saudi national came to America to practice aviation. *twitch* Nothing makes me think the post-9/11 Gulf Wars were worth fighting as much as watching my Air Force train the next generation of Saudi “Mohammed”s. /sarc

The shooting erupted in a classroom building, authorities said in a press conference. Alshamrani was a member of the Saudi Air Force and the Florida governor says the Saudi government now owes the victims in Pensacola a debt.

Two of the victims have been named: Mohammed Haitham and Joshua Watson. You can read about their lives here. The third victim has not yet been named.

Well, that’s a welcome change. It’s the fight of the century, Mohammed vs Mohammed! Speculation runs wild! Who will win?

On a serious note, this was not a jihad attack if fellow Muslims were targeted. Although that’s not what M. Saeed said in his manifesto:

Did Pensacola Shooter Mohammed Alshamrani Have a Twitter Manifesto?

The alleged Twitter manifesto reads, “O American people, I’m not against you for just being American, I don’t hate you because your freedoms, I hate you because every day you supporting funding and committing crimes not only against Muslims but also humanity. I’m against evil, and America as a whole has turned into a nation of evil. What I see from America is the supporting of Israel which is invasion of Muslim countries, I see invasion of many countries by it’s (sic) troops, I see Guantanamo Bay. I see cruise missiles, cluster bombs, and UAV.” The tweet is dated the morning of the attack on December 6, 2019.

Sounds like he’s taking out his frustrations on the US military specifically rather than America generally, an improvement over 9/11. American servicemen are even legit targets for that kind of thing. (military targets instead of civilian targets) Alas, his noble-sounding words sounded a bit less noble after this incident came to national attention:

[from fox news, I think]

Mohammed Alshamrani, who prepared the document with the help of two American classmates, according to The New York Times, claimed teacher James Day labeled him with the term at the end of a meteorology class in April.

A well-adjusted exchange student would have replied with a cameo appearance offer after a brief hesitation to think up a comeback.

You can’t intentionally sport a huge, identifying facial feature without this kind of teasing from peers who need something obvious with which to attempt a personal connection… seeing as they DON’T HAVE A COMMON CULTURE!

“I was infuriated as to why he would say that in front of the class,” the Times quoted Alshamrani as saying.

Day is employed by Delaware Resource Group of Oklahoma, a subcontractor to CAE USA, which offers instruction to aviation students in the civilian and military fields, according to the newspaper.

Following the alleged incident, Alshamrani reported it to CAE USA’s managers, The New York Times says. The company offered to have Day apologize, but Alshamrani rejected that proposal and instead talked with an office in the Navy that handles international students, the newspaper added, citing a person who spoke with Alshamrani after he filed the complaint.

Little goat fucker couldn’t take a joke OR an apology.

That same person said numerous government employees believed Day should be disciplined, yet he continued to teach.

About a week after the alleged incident, Day was paired up with Alshamrani for simulated flight training, The New York Times reported. When the Saudi found out, he complained to CAE USA and got the session rescheduled with another instructor, it added.

Brian Busey, the president of Delaware Resource Group of Oklahoma, told the Times that his company is cooperating with the FBI’s investigation into Friday’s shooting and that it had taken care of the alleged classroom incident in April.

“Appropriate personnel action was taken regarding the incident in question, corrective action was taken, the matter was closed back in April, and we have no further comment,” Busey said.

I bet the discipline was one tweet. “Jim dont tease the sand rats k thx.”

There is no indication yet that it had any connection to the shooting spree, in which Alshamrani gunned down three fellow sailors before being taken out by responding police officers.

O American people, I’m not against you for just being American, I don’t hate you because your freedoms, I hate you because every day you supporting funding and committing crimes not only against Muslims but also humanity.

I’m against evil, and America as a whole has turned into a nation of evil.

“…If this is your sense of humor!”

What I see from America is the supporting of Israel which is invasion of Muslim countries, I see invasion of many countries by it’s (sic) troops, I see Guantanamo Bay. I see cruise missiles, cluster bombs, and UAV.”

“Thank you for listening to my complaint. Have a nice day and death unto Israel. Sincerely, signed Mohammed.”