A bipatrisan consensus among America’s legislators has been reached that Red Flag legislation has gone too far. Your cranky correspondent is here to provide helpful examples!

REDMOND, Wash. — A 23-year-old Redmond man who police say made “concerning Twitter posts posing with weapons and referencing the Joker movie” has had several guns — including two assault weapons — removed from his home as part of an “Extreme Protection Order,” Redmond police said.

Investigators became aware of the posts last week, including one dated Sept. 26 showing [Charles Donnelly] holding two AK-47 guns — one in each hand, pointing skyward, fingers on triggers. The caption on the photo read: “One ticket for joker please,” according to Redmond police.

A popular meme for the Joker movie’s opening weekend. 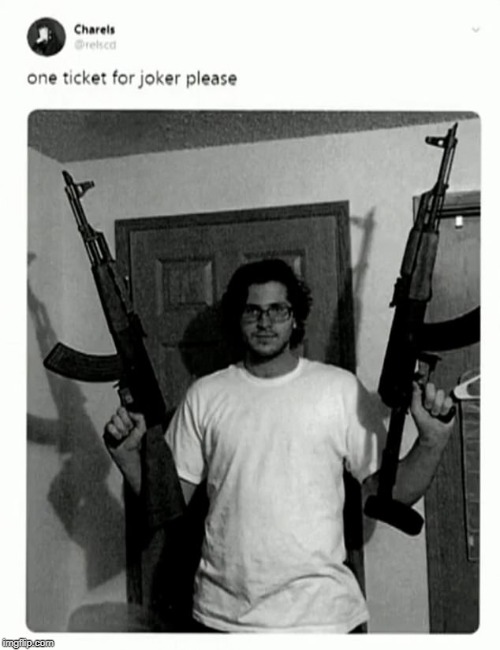 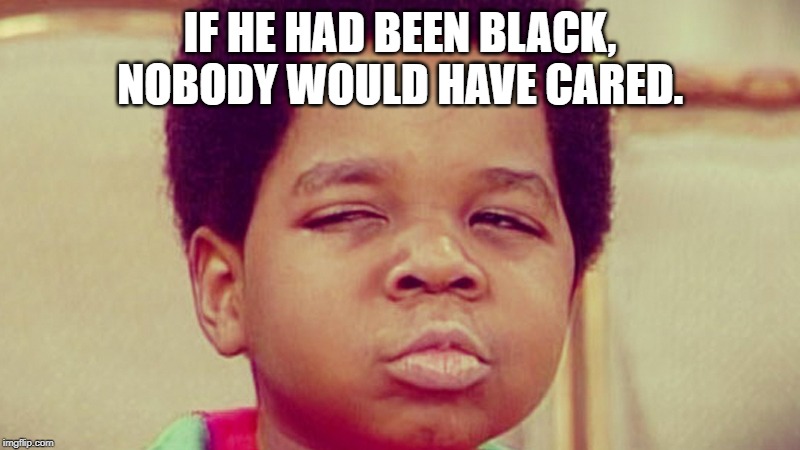 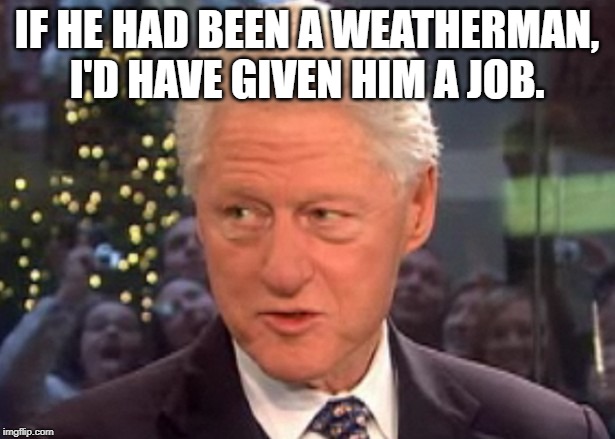 It took police five days to notice this “extreme risk”. I know movie lines can be long but the fact that nothing had happened by then was prima facie evidence for cops to finish their crossword puzzle instead of caring.

It’s fun to bait Leftoids, Chuck, but there is a danger that the joke will break their already-fragile grasp upon reality. Next time, use Photoshop for deniability… by pasting Bill Clinton’s face over yours… and sending an anonymous tip to Hillary.

The post comes as U.S. officials had issued warnings about the potential for mass shootings at the movie, which opened on Thursday to increased security around the Seattle-area movie theaters. FBI intelligence officials had uncovered social media posts related to extremists classified as ‘incels’ — short for “involuntary celibate” — and the man had been claiming to be one of them.

*Cops disarm a law-abiding citizen because he owns guns without a girlfriend.*

Investigators learned that the man had previous disturbing and threatening social media posts toward women in 2017, according to Redmond police’s petition for being granted an Extreme Protection Order.

Preposterous! Lots of us white men make social media posts that are disturbing and threatening only to… lawbreaking psychos who want us disarmed… oh. Uh-oh. My New Year’s Resolution is now to hide a couple family valuables in a completely legal manner.

More recent posts last month show the man with several guns in his home, tucked into his waistband or displayed in wooded areas, police said. In addition, he showed photos of high capacity magazines filled with rifle rounds and indicated he uses gun kits to make “ghost guns” — guns without serial numbers, according to police.

Take a memo, kids. The world does NOT need to know everything about your hobbies, especially if a lot of people are actively trying to ban them.

The man has not been charged with a crime but is expected to have a court hearing on Oct. 15. The man does not have a prior criminal history nor have police had contact with him before, according to Andrea Wolf-Buck with Redmond Police.

As usual for professional journalists, no closure was given for the story. The accuser’s name is also missing; we don’t need no stinkin’ due process! Fortunately for the Manosphere,

23-year-old Charles Donnelly from Washington fell prey to the controversial Red Flag laws pertaining to firearms after he posted satirical jokes online. However, his gun rights were restored after his order to the state to return his firearms was ruled in his favor by the King County Judge Averil Rothrock.

The court stated that posting a few jokes were not enough to have the 23-year-old disarmed.

[Prosecutor] Kim Wyatt who led the petition against Donnelly referred to his previous posts dating back to 2017 that read, “shoot any woman any time for any reason” and “kill all woman”.

“I’m not misogynist I just hate women,” was another of Donnelly’s jokes.

Based on these posts, Wyatt argued that Donnelly’s posts “implied threat of a mass shooting” and that the court must “balance the community safety needs versus the temporary deprivation of Mr Donnelly’s rights to possess firearms.”

It is worth noting that the hashtag “#killallmen” was, in the same year, a Twitter meme when deputy editor of Huff Post Personal, Emily Coombs, satirically added “Band together to kill all men” as part of her new year resolutions.

Now then, who is this Prosecutor Wyatt? 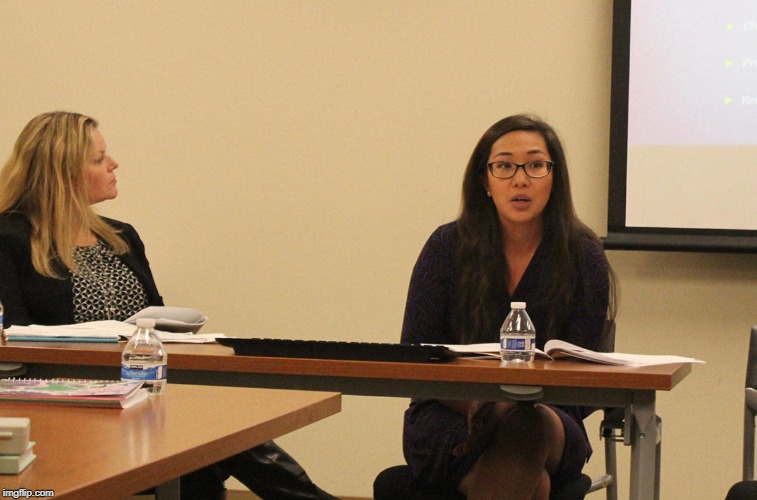 Wyatt on the left. Best pic I can get.

The panel featured Kimberly Wyatt, a deputy prosecuting attorney who helped write the state’s current ERPO law, Melissa Chin, a legal advisor with the Bellevue Police Department [pictured above at right], and three police officers from the Bellevue, Issaquah and Redmond departments.

The seminar came about, in part, to both explain ERPO law in Washington state and clarify any questions the public might have about it. Because the law took effect in the state in Dec. 2016, many people living in Washington, as noted by the panel, still might not know much about it and what it can do.

Wyatt acknowledged that the initiative was passed without education about ERPO law being immediately accessible to the public.

“‘How do you get the word out in a systematic way?’” Wyatt said she and her colleagues have asked themselves.

A better question, you feckless bitch, is how do you get the word out BEFORE the law is enacted so the people you “protect” can be part of the process instead of unwitting recipients?

The goal of an ERPO, according to Wyatt, is to prevent or reduce harm.

“This tool is really designed for before the crime has occurred,” she said. Chin added that an ERPO aims to “keep guns out of the hands of someone in crisis.”

And give feminists like Wyatt the ability to persecute unsexy men when they, in her personal opinion, step out of line.

There are consequences for those who violate the ERPO process.

If someone files an ERPO petition knowing that the information they have provided is inaccurate, or if they have done so with the intent of harming the respondent, they will be found guilty of a gross misdemeanor.

That is something Washington residents should look into. I doubt Chuck will be Prosecutor Wyatt’s last target.

Last year, there were 71 ERPOs filed in Washington state, with 211 firearms recovered.

How many of those disarmed men were later charged with violent crimes?

Wyatt added that there have only been a handful of ERPO cases in Washington state in conjunction with a criminal case.

Yeah, I thought so. Red Flag is gun confiscation, pure and simple.

And now, let’s see how the other half lives!

Democrats Want Red Flag Laws for Everyone Except Gang Members

Democrats Want Red Flag Laws for Everyone Except Gang Members

House Democrats on Wednesday refused to include gang members in a list of who should have their guns removed via red flag laws.

Democrats were advancing a measure in the House Judiciary Committee that would encourage states to pass extreme protection orders, also known as red flag laws, when an amendment was proposed that anyone who was put on a police gang database should automatically be targeted under the orders.

Representative Ken Buck, a Republican member of the House for Colorado, sponsored the amendment, and told the House just why the gangs should be included:

“The majority of violent crime, including gun violence, in the United States is linked to gangs… My amendment is quite simple. It would allow the issuance of a red flag order against anyone whose name appears in a gang database if there was probable cause to include that individual in the database.”

That’s more due process than most ERPO targets get.

Of course, the Democrats were opposed to this amendment to the red flag motion. 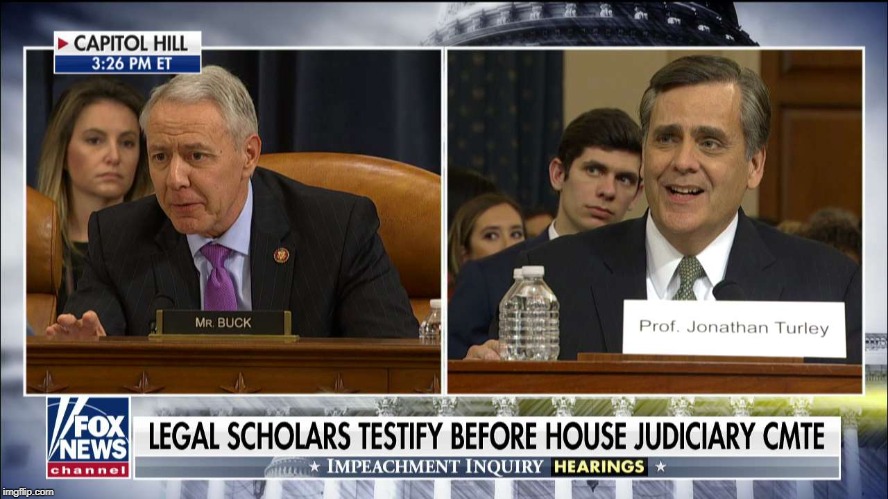 Representative Zoe Lofgren of California said that only “some of [the databases] are reliable, a lot of them are not.”

Judiciary Committe Chairman, Jerry Nadler of New York, was concerned that anyone who wrote “13” on a piece of paper would be wrongly accused of being a member of MS-13. “Maybe you are just doodling because it is the 13th of June,” Nadler said.

W00T! Troll 10/10 to Rep. Ken Buck! Not only did he reveal their hypocrisy but Swalwell admitted straight-up and on the record that he wanted Red Flag laws to target his political opponents!

The spectacle! A Congressman who gives a damn and does his job well!

Representative Doug Collins, of Georgia, was swift to call out the hypocrisy of the Democrats, for previously supporting the “No Fly, No Buy,” motion, which would stopped anyone on the federal “no fly” list from buying guns.

This is despite the list having misidentified many individuals as potential terrorists, such as the late Senator Ted Kennedy. “It’s amazing to me,” Collins said:

“We had a large blow-up on the floor of this House just a couple years ago about the “No Fly, No Buy” list, which was shown to have issues, but at that point, nobody from the other side brought this is as a concern, and now we are bringing it as a concern… If we can’t bring this list up, even with due process put in, then don’t ever bring the “No Fly, No Buy” list up again… Don’t ever bring it up again because there is no due process on that list.”

Demonrats got PUNKED! YES! TWO POLITICIANS *BOTH* DECIDED TO DO THEIR JOBS IN THE SAME PLACE AT THE SAME TIME! Making America Great Again!

This is not the first time that Democrats have opposed policies that may genuinely crack down on gun violence, without infringing the rights of ordinary citizens.

Project Exile was one of those. Under this program, any convicted felons who were caught in possession of a firearm were instantly sentenced to 5 years in jail. The second offense was an automatic 10 year sentence.

It was first tried in Richmond, Virginia, in the late 90s, and gun crime dropped by 40% after 1 year.

Of course, the Congressional Black Caucus opposed it, claiming that it was a racist program that targeted minorities.

Of course, the hypocrisy of the Congressional Black Caucus calling somebody else racist was lost on them.