This one has it all. It’s the Principia Summa Red Pillica of the Manosphere. Have you ever fantasized about how, if some ninety-pound female cop decided to arrest you, you’d just plant your feet, hold still and see how long it takes her to call in a man to do a man’s job? It’s not a fantasy anymore. H/T Donut Operator, of course.

The good stuff starts at 7:30 but watch the whole thing for how utterly useless Barbie was as a law enforcement officer. Another diversity hire is going to cost the local government a fortune and the mother was not even a Dindu chimp.

A solo female officer identifies a shoplifting suspect. He passively refuses arrest and rebuffs her effort to arrest him with ease despite his obvious mental retardation and lack of fitness. He even says verbatim, “we can do this mean or we can do this nice. I’m asking you do this nice” and grabs both her wrists at the same time.

Barbie calms down, radios for backup, then suddenly wigs out, draws her firearm, begins screaming, shoots his mother instead of him, then tries to shoot him again when he becomes violent in defense of Mom. You can hear Barbie hyperventilating and it can’t possibly be because she was exhausted. She also makes no effort to aim her pistol, I mean NO EFFORT AT ALL TO AIM, like she’s forgotten that she’s even holding it. A dramatic example of what happens when a woman runs out of testosterone and her glands switch to adrenaline.

The shoplifter wrestles armed Barbie to the ground, pins her, orders her to stop hurting Mom then steps back and sits down while she whimpers in the fright reaction.

That’s when her backup arrives… 250lb Deputy Leonidas, who never used a gun when he could kick their ass instead… 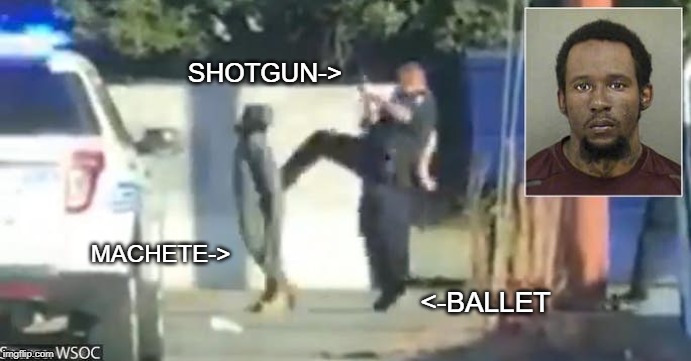 …who in under fifteen seconds, walks in the door, punts the shoplifter’s head into outer space, pins him to the ground until he stops twitching and begins de-escalating Barbie. “Secure your gun… are you okay?… *she picks her pistol up by the barrel so it’s pointing at her*… look down at your holster… good.”

“Look down at your holster”, sheesh. Barbie must have been tunnel-visioned down to a pinprick. Adrenaline, I tell you.

What a contrast. She couldn’t control a nonviolent situation even with lethal force. He drew but didn’t bother to shoot, just face-kicked the perp so hard his boot came off. And all she had to do to contain the situation was wait THIRTY MORE SECONDS.

Women are not men. Women are never going to control unwilling men without either a man helping her or a literal killswitch. And even the latter is not reliable because when women get that adrenaline rush, the result will be fight, flight or fright… not “default to your training”.

I close with a salute to Deputy Leonidas:

Edit, I don’t think this cop is that same Leonidas as that cop, but they both have the right idea about how to fight crime.

6 thoughts on “The Perfect Cop Video”