I’m not one to see hidden conspiracies everywhere; the visible, provable conspiracies keep me plenty busy enough. By way of example, my daily scan of crime headlines turned up the silliest FBI false flag I’ve yet seen. 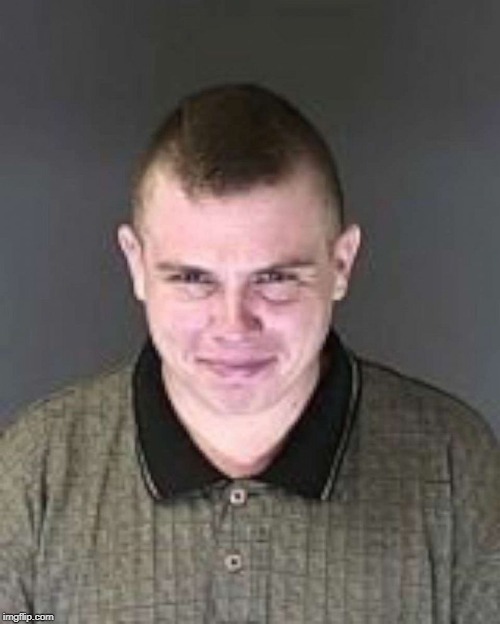 The arrested suspect, Richard Holzer of Colorado. This is nearly the only picture being circulated of him and it was obviously chosen for the menacing head tilt. 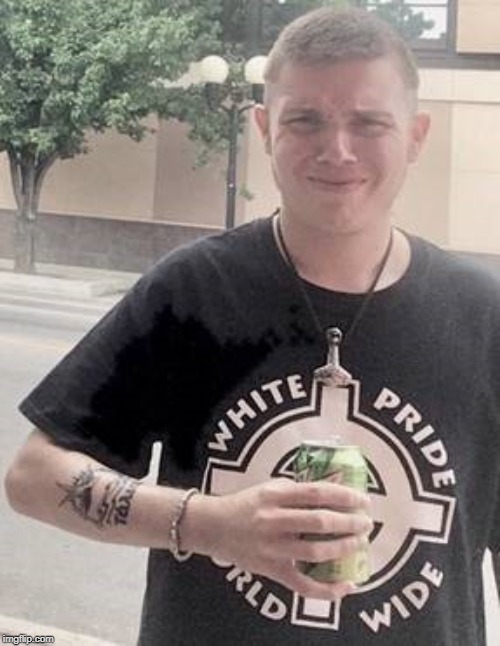 Better. Nearly closed eyes at a young age suggests a lot of internal, emotional pain. Combined with a lack of criminal history, he’s a typical low-average guy trying to escape a terrible domestic situation. Twiggy arms indicates he’s not much of a physical threat. But the FBI claims he’s an anti-Semitic terrorist.

Richard Holzer is a California native and white supremacist facing federal charges accusing him of plotting to bomb a synagogue in Pueblo, Colorado.

Holzer is a resident of Colorado. Why bring up his childhood in California? To broaden the appeal of his arrest? If anything, this is consistent with my reading that he’s escaping a terrible domestic situation.

He told undercover agents [that he’s] a former KKK member and a current “skinhead,” the FBI says.

The FBI playbook has only one play in it: use informants and moles to infiltrate selected opposition and find (or create) enough dirt to file charges. That’s a maybe-legit tactic against organized criminal syndicates because one informant burns another, domino fashion, until the officers go down and the syndicate implodes.

Here, however, we’re talking about a grocery clerk who only allies were FBI informants and coming up, a nameless Mexican witch doctor.

Holzer is also accused of planning to poison members of the Colorado synagogue by putting arsenic in their water pipes.

I’ve never heard of arsenic being used that way in all my hobby of true-crime stories. White nationalists don’t poison the water supply, the government poisons the water supply. *Gunner Q points at his water softener and filters*

Per the criminal complaint, Holzer claimed to have already poisoned the synagogue a year ago but nobody noticed.

Holzer, 27, was arrested on November 1 on a charge of attempting to obstruct religious exercise by using explosives and fire, according to court documents filed on November 2 in Colorado federal court. Holzer is being held in federal custody pending a detention hearing.

November 5 is 2019’s big election day for USA (first Tuesday of November). This was perfectly timed to influence that election.

U.S. Attorney Jason Dunn said at a press conference said they stopped, “what we believe to be an imminent threat of domestic terrorism against a Colorado religious institution.” Dunn said FBI agents became aware of “racist, anti-Semitic and threatening statements” made by Holzer on social media.

He said Holzer, “repeatedly expressed his hatred of Jewish people and his support of a racial holy war.”

We’ve heard those war drums before. It’s fun to watch the FBI leverage Jewish insecurities. Speaking of, isn’t it interesting that Jews apparently live in constant terror of a goyim uprising? Why might we be inclined to do that, and if they think it’s a legit threat, why not return to Israel… all expenses paid?

FBI Special Agent-in-Charge Dean Phillips told reporters the investigation into Holzer began after the FBI’s Denver office received a tip about online comments he had made. Phillips said they had “credible information” that Holzer was plotting to harm members of the Jewish community in Pueblo and began an investigation.

Yep, Facebook data mining. Not hard to imagine those Converged tech companies helpfully providing anonymous tips on just about any group the FBI might care about.

“After reviewing multiple social media posts, and utilizing a number of investigatory techniques, we determined that Mr. Holzer did pose a threat to our Jewish community, specifically, we learned that he appeared to be planning to destroy the Temple Emanuel synagogue,” Phillips said. “Our task force used multiple investigative techniques to gather information that led to Mr. Holzer’s arrest late Friday night, including recorded conversations, meetings with undercover FBI agents, exploitation of social media accounts and the execution of a federal search warrant.”

Is that what they teach at Quantico now? Troll the reddit forums, send a pretty female informant to befriend the lonely ones and get it all on camera? That’s not law enforcement, that’s a prostitution blackmail ring.

Holzer told undercover FBI agents he was taking part in a “racial holy war,” and said his plot to destroy the Temple Emanuel synagogue in Pueblo was his “mountain.” He said Jewish people are a “cancer” on his community. Holzer was planning to attack the synagogue on November 1 and believed the undercover FBI agents he had been corresponding with and meeting with in the Pueblo area were going to help him, according to court documents.

Textbook entrapment. This is not legit police work.

According to the targeted synagogue’s website, “Temple Emanuel is on the National Register for Historic Places and is the second oldest Synagogue in Colorado. …

In court documents, an FBI agent wrote that Holzer should be charged because of his “hate crime and domestic terrorism-related activities.” The FBI agent added, “I submit that the evidence developed during this investigation shows that the defendant’s actions meet the definition of ‘domestic terrorism,’ in 18 U.S.C 2331, in that the defendant’s actions involve criminal acts dangerous to human life and are intended to intimidate or coerce a civilian population.”

The undercover agents who convinced him to engage in those actions are, of course, exempt from prosecution. Even at the best of times, that’s one hell of a slippery moral slope.

Here’s what you need to know about Richard Holzer:

Who wouldn’t like to kill a bunch of pedophiles? Nobody rapes children and deserves to live, by decree of God Himself. The comment about spics actually undermines the FBI case that he’s an anti-semite. A guy who hates everybody and himself isn’t committing a hate crime because “everybody” is not a race.

But it’s hard to be sure when the tweet is blatantly copypasta-ed.

Holzer told the undercover agent that he had hired “a Mexican cook,” nicknamed “Mexican Hitler,” to “hex and poison” the synagogue on October 31, 2018, but the FBI said in the criminal complaint there is no evidence to corroborate his story. Holzer said he paid the cook $70 to put arsenic in the pipes of the synagogue. On October 4, 2019, he sent a video to the undercover agent showing him outside the synagogue and saying he would poison it again because the previous attempt hadn’t worked. 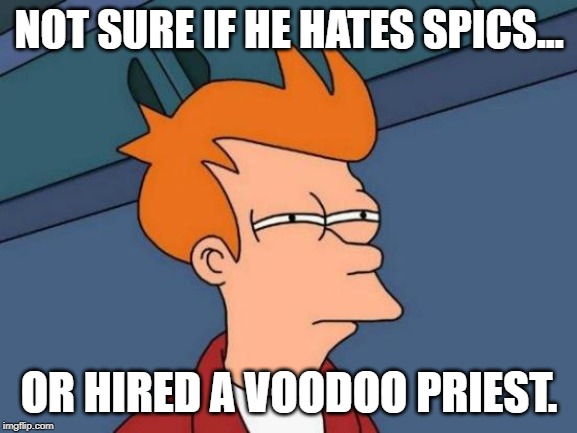 An international hitman charged only $70 to do a Jonestown on 30 families? Was he going to do it anyway but needed gas money after evading the Border Patrol?

Amusingly, the criminal complaint states that the synagogue was closed for a time after the hex and Holzer credited the hex for that… and Holzer was planning to pay for another hexing, not just the arsenic. I wish I could see the expressions on the jury’s faces when the prosecution claims that Holzer’s preferred terrorist weapon is a witch doctor that the FBI can’t find.

Notice that this undercover operation lasted for over a year but Holzer is the only person it was able to arrest. One wonders if the FBI got the dirt on him and then waited months for a politically opportune time to drop the hammer, because the alternative is that this operation spent a lot of resources with nothing to show for it.

According to the criminal complaint, when he was asked by undercover agents what he would do if anyone was inside the synagogue when he went to blow it up, he said he didn’t care if they died, “because they would be Jews.”

I read that criminal complaint and it admits that Holzer specifically stated that he did not intend to harm anybody. Only after that admission did the informants ask “but what if somebody happens to be there when you bomb it?” and Holzer replied he didn’t care. The agents were worried that they wouldn’t be able to charge him with serious-enough crimes.

According to [the] criminal complaint written by FBI Special Agent John Smith, the investigation into Richard Holzer began after he began messaging with an undercover FBI agent posing as a female white supremacist on Facebook. Smith wrote that Holzer has “used several Facebook accounts to promote white supremacy ideology and acts of violence, in direct messages and group chats with other like-minded individuals.”

“My name is Candy and I think KKK thugs are hawt. Are you a KKK thug?”

“I’m so excited! If you bring me a copy of Mein Kampf with your fingerprints on it then I’ll pay for the hotel room.”

3. Holzer Was Arrested on November 1 After Meeting Undercover Agents at a Hotel While Carrying a Knife, a Mask & a Copy of ‘Mein Kampf,’

Score! He got screwed. Worried about your optics, FBI?

It is not clear exactly when Holzer moved to Colorado. He does not appear to have a prior criminal record in California or Colorado. At his first court hearing, it was revealed that he worked at King Soopers, a grocery store, in Pueblo, according to The Denver Channel.

A dim-witted loser wanted too much to be part of an organization that promised him a better future than bagging groceries, and when a troupe of crisis actors… excuse me, undercover agents… pretended to offer it to him, he thought with his little head.

This nothingburger of an indictment would be a guaranteed flop in the courtroom except that Holzer reportedly waived his Miranda rights in the police station to make more rants… consistent with his being so easily manipulated that he brought Mein Kampf to his arrest party as ordered. That will sink his ship even though it’s proof that he’s no real threat to anybody. The people who won’t shut up about their scatter-brained plans are not the ones you need to worry about.

The real hate crime here is the FBI stoking Jewish racial paranoia for political gain by ruining the life of a useful idiot… which would fit some interpretations of 18 U.S.C 2331.

One thought on “Another Election, Another FBI False Flag”