I have found a picture that perfectly captures the modern sexual marketplace. Behold the homecoming king & queen for a small high school in Texas: 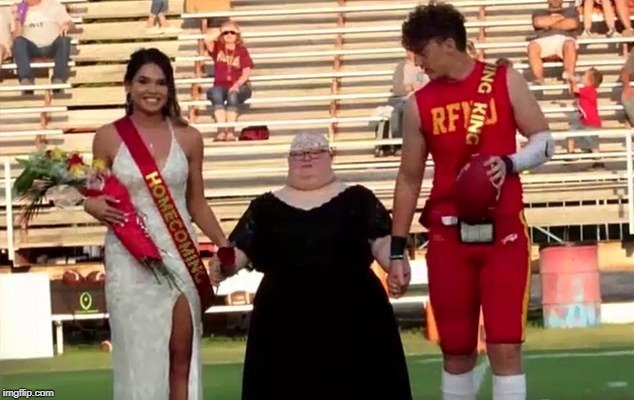 Homecoming queen gives crown to friend with Down syndrome

When the S&S High School homecoming queen winner was announced, Trinity Arrington was shocked to hear her name. Arrington, a senior at the Sadler, Texas school, walked across the field to get her crown – but she decided it actually belonged to someone else. So, she handed it to another girl: her classmate, Emily Petty, who has Down syndrome.

“I didn’t think I was going to win. I told everyone that asked me if I wanted to win that I wanted Emily to win, so I told them to vote for her,” Arrington told KXII. Both girls were nominated for the high school honor, but Arrington ultimately won. 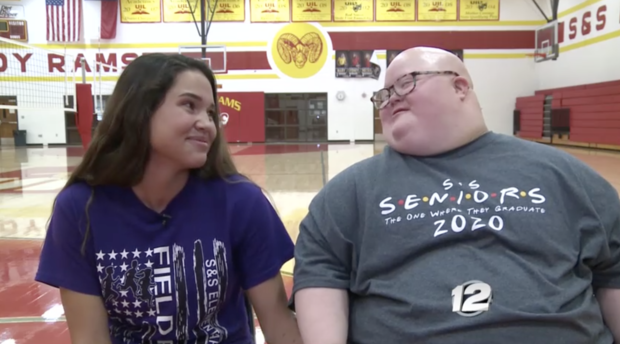 That’s a woman on the right, Petty. I’ll guess that the special needs class was allowed to nominate a candidate for homecoming queen.

A trip through the high school website was useless despite this story going viral.

However, she wanted Petty to share the spotlight. “I decided to give my crown to my sweet friend Emily because she’s always wanted to be a princess. So I decided she deserved it,” Arrington said.

Video from the homecoming game shows the two girls walking hand-in-hand down the field – the glittering crown sits atop Petty’s head. The teens met a year ago, when Arrington started eating lunch in the special education classroom and befriended Petty.

Question: why would a hot chick refuse to eat with the normal students? Why did she prefer the company of the barely-functional crowd? A year is too long to do it as a class project.

Either Trinity was trying to look good by comparison or she was sick of constant attention from “creepy” boys. Clue: she’s already hawt by the standards of a rural high school.

“I love her every day,” Petty said, holding her friends hands as they spoke with KXII after their homecoming win.

Arrington said she cried when she handed her friend the crown. And Petty assured her she shouldn’t cry.

“We got to be it together. I think that was the best part for me,” Arrington said. For both of these girls, winning homecoming queen is a day they will never forget – but it’s about more than a high school title.

Arrington’s kindness means the world to Petty. And Petty inspires Arrington right back. “She’s always been my queen, she deserved it. It made her happy,” Arrington said.

On the left, Trinity got to virtue-signal while looking extra-pretty by comparison while not having to touch the homecoming king.

In the middle, Petty is too brain-damaged to be blamed for accepting an award she didn’t earn.

Um, on the right…

I don’t know his name.

No story and no Internet search I did turned up Homecoming King 2019’s name. Only one version of the posted video was un-edited enough to call him Elijah, first name only.

On the right, Elijah was forced to walk with a butterball of a fraud while the real Queen practically sneered in this photo, this despite him being athletically muscled and even posing with a football.

And my last note on the picture, look at their hands. Ignored Elijah was gracious enough to hold Petty’s hand and walk at her pace. (Notice head positions.) Trinity her “friend” pulled her along by the arm for the victory walk and abandoned her entirely at the end. (Apologies for not linking the video, CBS is keeping it locked down.)

Welcome, future MGTOW! Pull up a chair, Elijah, you are among friends in this club.

Meanwhile, even in small-town America (Sadler, TX population: 360), girls are getting so drunk on online attention, and at such a young age, that they snub even the local Alphas.