Okay, that was a lie (or a prophecy). But seriously, the new habit of e-cigarettes made smoking nicotine much healthier for addicts and more pleasant for everybody else until Vapers began suffering sudden lung failure. The news media claims that vaping itself is dangerously unhealthy. But if that’s true then why is the death toll six and not a more likely fifty thousand? Occam’s Razor says these end-user geniuses had discovered you can load other fluids into an E-cig.

Like the Colorado hippies who discovered, I assume by trial and error, that licking a certain species of frog provided a hallucinogenic experience, the E-cigarette community is entering its uncomfortable and inevitable adolescence. “Duuude, try this antifreeze mixed with Drano and banana peel! I call it the Tunnel Vision mix.” 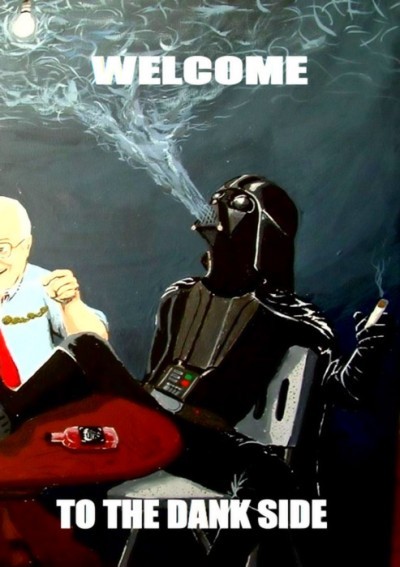 We begin with this innocent bystander: 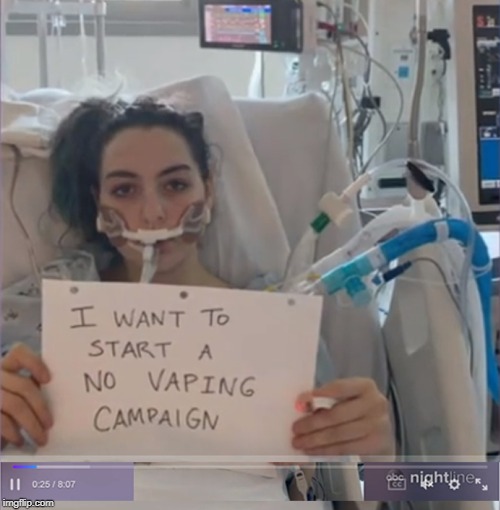 This is Simah Herman, a perfectly normal and healthy girl who totally didn’t start doing drugs underage until it ruined her health even before she loaded that free sample of Mother Trucker CBD.

(LOS ANGELES) — Though she might not look like it today, Simah Herman said she was sure she was going to die last month as she sat in the car unable to breathe, her father racing her to the hospital.

Ambulances can reach you faster, and safer, than you can reach the hospital. Just sayin’, it CAN be money well spent when breathing is really hard.

“I just remember feeling like absolute…nothing. Like I just couldn’t do anything,” Herman, 18, said. “I couldn’t drink water. I couldn’t move. Like, I literally just wanted to crawl out of my skin.”

The doctors looking after Herman at Los Angeles’ Ronald Reagan UCLA Medical Center were also stumped. On that day, Aug. 15, a chest X-ray showed white hazy areas at the bottom of her lungs, which her pulmonologist, Dr. Kathryn Melamed, said could potentially be pneumonia. Less than 48 hours later, chest X-rays showed that her lungs were filled with white — they were inflamed and full of fluid, Melamed said.

Pneumonia occurs most often after an initial infection, so I understand, and very rarely in a healthy young adult. Barring disease and congenital issues, the most likely cause would be chemical irritation. I suspect the pulmonologist also knew this and the “they didn’t know” idea is being played for drama.

“My best guess since we’re still learning about what is really going on in the lungs is [it’s a] profound inflammatory reaction to the vape products or some…component of the vape products,” Melamed said.

Translation, that wasn’t nicotine you were smoking, Barbie.

Still unable to breathe after two days, Herman had to be put on a ventilator, and shortly afterward, a medically induced coma. It was while she was in the coma that her cousin revealed a secret that Simah had been keeping from her parents that helped lead to some answers.

Ooh, even saucier than my “playing it for the drama” suspicion! Her parents didn’t know she was a smoker… because she “didn’t think of herself as a smoker”? But she did think to keep her not-smoking a secret from them.

By the time that Simah Herman had emerged from her coma, she had been in the hospital for five days. With a ventilator still pumping oxygen into her failing lungs, the teen who said she would vape every 10 to 15 minutes decided to become an advocate against vaping.

“I asked for, like, a pen and paper because that was the only way I could communicate,” Simah Herman said. “And I wrote, ‘I want to start a no-vaping campaign.’ That was the first thing I did when I opened my eyes.”

“Darth Vaper hurt me, Daddy! It was Darth Vaper!”

Simah Herman’s story is one of the latest in a string of cases of serious — sometimes even life-threatening — illnesses linked to vaping.

As of Sept. 10, there have been six confirmed deaths and over 450 possible cases of lung illness in 33 states associated with e-cigarette products, according to the Centers for Disease Control and Prevention (CDC), which noted that in addition to nicotine, patients also reported using e-cigarette products with liquids containing cannabinoids like THC, the active compound in marijuana.

The truth comes out. They were vaping the Drano.

Many of the cases involve teens.

Simah Herman said she first started vaping at age 15, and that she’d buy the cartridges from a smoke shop despite being a minor.

This is my shocked face that cannabis dealers aren’t paragons of Lawful Good.

Just this week, the FDA sent a warning letter to Juul, the industry leader for vape products, accusing it of illegally marketing its nicotine vape products as safer than traditional cigarettes without proof.

That doesn’t sound right. Vaping is obviously safer… not safe, of course… simply because customers aren’t inhaling smoke with its zillions of toxic chemicals. Also, said customers are no longer playing with matches.

It’s just the FDA complaining about an overzealous tobacco lobbyist selling schoolkids on vaping. Not a peep about the military recruiter standing next to him offering free gender reassignments.

The more I look at this vaping scandal, the more it looks like the unholy union of a bureaucratic witch hunt with a street gang scouting new markets.

In a statement to ABC News, Juul said it was reviewing the FDA letter and that it would “fully cooperate.”

“We share these concerns about youth vaping, which is why we have taken the most aggressive actions of anyone in the industry to combat youth usage,” Juul said. “We strongly advocate for Tobacco 21 legislation, we stopped the sale of non-tobacco and non-menthol-based flavored JUULpods to our traditional retail store partners, enhanced our online age-verification process, strengthened our retailer compliance program with over 2,000 secret shopper visits per month and shut down our Facebook and Instagram accounts while working constantly to remove inappropriate social media content generated by others on those platforms. …

In most of the cases I reviewed, it was cannabis oil being vaped not mere nicotine. Turns out that the pneumonia in question is “lipoid pneumonia” which is a non-disease form of pneumonia caused primarily by inhaling oils and related aerosols into one’s lungs. I learned something new today! I learned what happens if you inhale oven cleaner.

Truly, the Internet is a fount of useful knowledge.

Simah Herman was healthy and active when she first started vaping . She had been a dancer for years, even making the dance team during her freshman year of college. But she said her abilities started to diminish as her vaping habit increased and she began vaping cannabis as well.

Eventually, she was vaping a nicotine cartridge a day, with the total amount of nicotine in one cartridge the same as that in a pack of cigarettes.

The witness, her cousin reported two packs a day. My money says ‘Cuz is closer to the truth.

“I didn’t think of myself as a smoker. Like, it’s just a different kind of smoke,” Simah Herman said. “The vaping just makes it seem like nothing. Like you’re doing nothing wrong.”

In the two years that she had been vaping, Simah Herman said she lost 50 pounds “without trying” because she felt sick all the time. She said she often felt nauseous and dizzy, too, and that she didn’t notice how her appearance had changed.

You weren’t a smoker, Drug Addled Barbie, you were just another self-destructing addict who refused to ask for help because you didn’t want help. God only knows how you kept such a weight loss hidden from your parents.

Oh yeah, you went to college. Which means your starting at age 15 is not matching up to your two years of self-reported side effects.

As her health issues worsened, she also stopped going to classes. Doctors, meanwhile, weren’t able to offer any solid answers, even though she would tell them that she vaped, she said.

“I told every doctor that I went to just because I had such severe issues,” she said. “I wanted to make sure that…wasn’t making anything worse, but no doctor ever said, like, ‘Maybe you should stop vaping.’”

Was there a reason they should have? Nicotine doesn’t normally cause digestive troubles, neither do lung troubles. I suspect she was “recreating” with something else at the time. Wild guess here, she changed boyfriends just before the two years of side effects started.

Melamed said there is a lot that’s still unknown about the consequences of vaping. “We don’t know which components — if it’s a certain component or certain product [or] certain brand that is responsible for both the short- and long-term effects of vaping,” she said.

Stacy Herman, however, believes the whole industry — not just Juul — markets to minors purposely. After she discovered that her daughter was hiding her vape addiction, she said she “ransacked her room” and “found all the vapes.”

“The fact that they market this crap to children, and they turn it into pink, pretty purple packaging [kind of] pisses me off,” Stacy Herman said. “I’m so angry that [Simah] can get a hold of this thinking it’s nothing wrong with it because everyone’s doing it. … It looks and smells like mango, and it looks and smells like bubblegum and her room smells delicious. I smell[ed] the packages. They smell great.”

Although Simah Herman has stopped vaping, she said she still feels compelled to pick one up.

Hoping that her story going public will help to discourage e-cigarette use, she said that she’d tell teens who want to try vaping that she once wanted to try it just once, too.

Guess what, Mommy, the advertising worked so well that even now, both you and your druggie daughter are blaming the medium for the message. It’s nicotine and marijuana that should be avoided. Smoke it, suck it, vape it, the method changes but chemistry is forever. 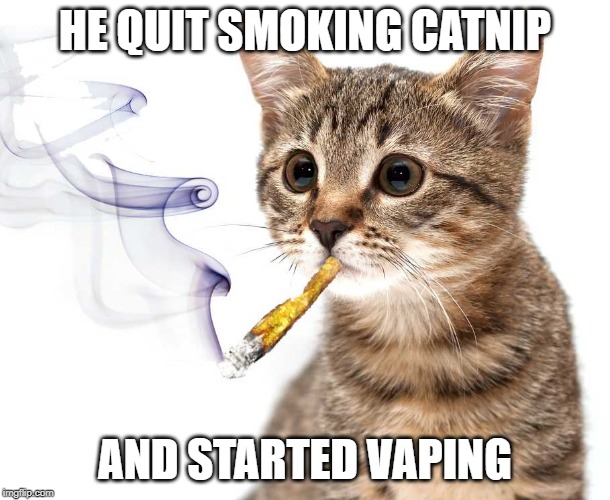