The American Heritage Girls (AHG) has been recently slammed by Dalrock and promoted by Boxer. Both have valid-sounding points so it’s time for my own look into the organization.

Believe it or not, I was an assistant leader in a Christian substitute for the Boy Scouts after they Converged, for a year or so. It wasn’t a natural fit. I don’t understand kids and am uncomfortable around them, but the local church had no other use for me and it’d have been hypocritical to refuse.

So I turned out for it, and it went tolerably well for the most part. The kids liked me more when I was my sarcastic normal self than the well-mannered role model I tried to be, and even more when I reluctantly let them play with matches. One kid was a bad apple and I tried to get him removed, only to be told by senior pastor (who himself had had enough encounters with the brat to roll his eyes at the name) that he needed our influence, being fatherless. My response that he needed a parole officer instead wasn’t well received. I wasn’t joking, either.

So, I had no actual authority with which to control the group, neither was the formal leader a strong authority, so it was just a hang-out group for the most part. Never more than 10 kids. The end came when the sponsoring church appointed female leadership and my frustrations with its blue-pill management became intolerable.

Anyhoo, the AHG was created specifically as a Christian alternative to the ultra-feminist Girl Scouts. That needed doing but that also probably means they’re Cuckservative, since I haven’t noticed any pogroms against healthy girls in the headlines. But let’s have a look, starting with their merit badges as a gauge of their priorities:

Together As A Family Badge. Sounds promising. 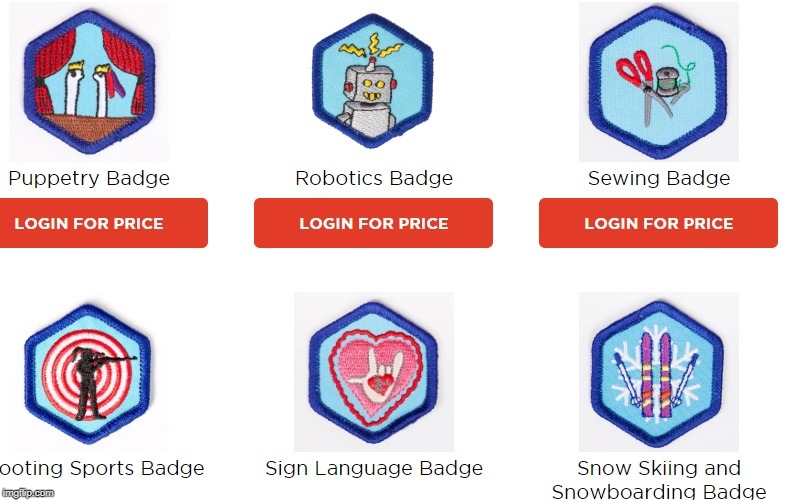 Sewing and puppetry, good. Robotics, that stinks of “Go into STEM!” manipulation. And I get grief everywhere for believing women shouldn’t train with weapons. They’re prey animals and need to behave accordingly. 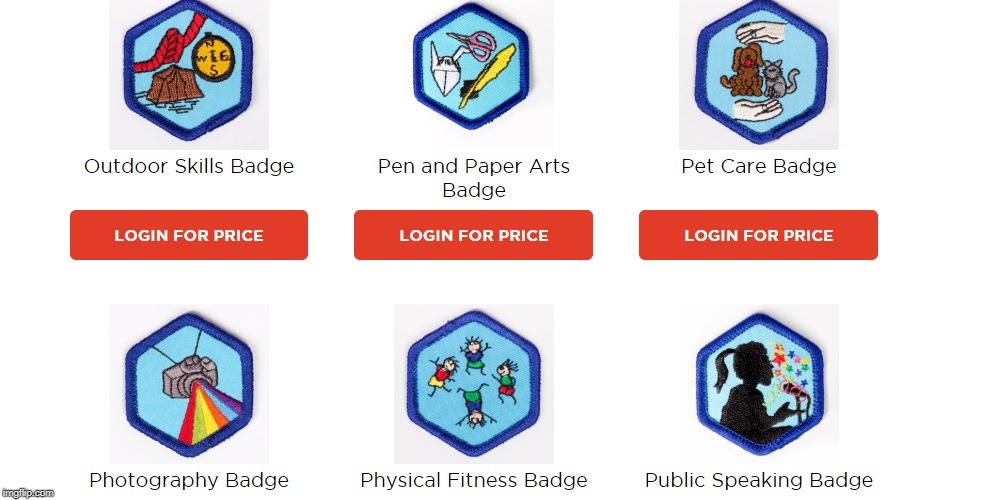 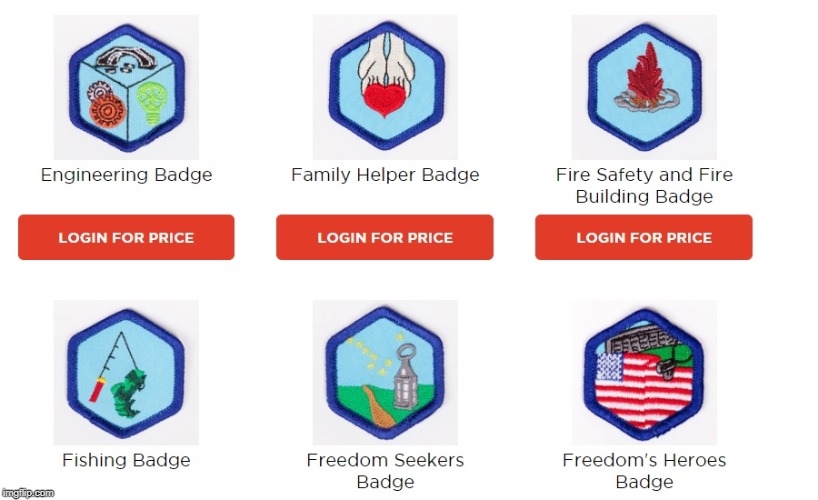 While I can’t give a specific objection, most of these sound more appropriate to boys’ curriculum. 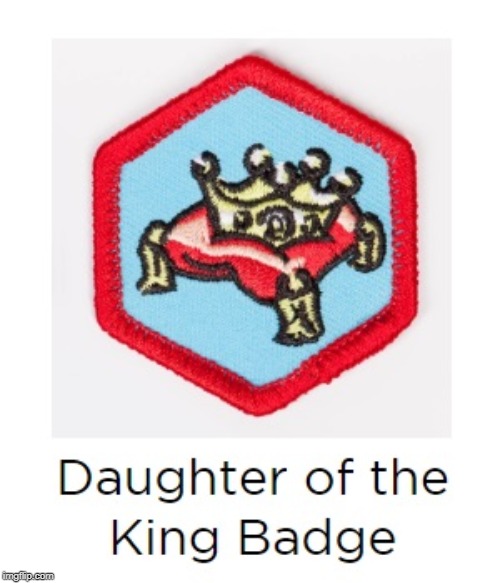 Holy Fu-u-u-nk. That’s “holy smelly”, kids. Don’t curse like Uncle Q until you’re 18 and don’t make dick jokes until you’re 21. But Josh, can you teach me that naughty limerick first?

AHG doesn’t publish much material for the general public to view for free so let’s go to a devil’s advocate for a remarkably funny and complete overview of their basic program. Yes, that Trigglypuff with optional Skrillex will make an ideal devil’s advocate.

Want your daughter to learn all about camping, sewing and car repair, but with a heaping helping of Jesus? You could try to find a local Girl Scout troop with an especially Bible-thumping troop leader. Or you could just skip straight to the American Heritage Girls, conservative Christianity’s very own copycat.

It’s a common trope on the far-right that the Girl Scouts have become an out-and-out liberal organization with ties to Planned Parenthood. (The national organization patiently continues to insist they have no formal relationship.)

There’s a difference between “having ties” and “having a formal relationship”. Click the following for more.

This year, the barrage has intensified, thanks to a ginned-up controversy about the Girl Scouts of America supposedly tweeting support for Wendy Davis. (Not really true, but why let the facts get in the way of a boycott?)

Not REALLY true because they only discussed making her Woman of the Year.

And so, amid the bombardment, right-wing media outlets are trumpeting an alternative, called the American Heritage Girls. While much smaller—something like 30,000, compared to 2.3 million Girl Scouts—they’re held up as a competitor. A columnist at fire-breathingly conservative outlet Breitbart, recently cheered: “AMERICAN HERITAGE GIRLS OFFERS FAITH-BASED PATRIOTIC ALTERNATIVE TO DECAYING GIRL SCOUTS.” Glenn Beck’s site, The Blaze, did their second piece on the group, following a 2012 intro. The National Review ran a Q&A between founder Patti Garibay and Kathryn Lopez, carrying the headline, “Good American Girls.”

So what’s a gal gotta do to qualify as a “Good American Girl” these days? This video from September 2012 provides a nice introduction. The group paints itself as a force “countering the culture,” which “provides girls the necessary tools to defend their faith and to live righteously despite the mixed messages of a culture devoid of a moral code. …

The group was founded in 1995, when Girl Scouts began allowing members reciting the organization’s Promise to replace “in God” with alternatives like “Allah” or “my creator.” You know—dogs-and-cats-living-together level stuff.

The last time I saw a catty female make that much noise, her owner needed acetone to clean the furball off the carpet.

So: What does this “Christ-centered,” anti-abortion alternative to the Girl Scouts look like? I ordered a copy of the group’s handbook to find out. (You can’t order through AHG’s online story unless you’re a registered member, so I turned to Amazon’s marketplace.) And, well, imagine a bizarro version of the Girl Scouts from a parallel universe where Mike Huckabee got elected president in a landslide.

Their uniforms look like Girl Scout uniforms, complete with sashes, except they’re red, white and blue. Proper treatment of the flag gets 7 pages. Girl Scouts rise through the ranks as Daisies, Brownies, Juniors, Cadettes, Seniors and finally Ambassadors, while AHG goes a little more Captain America: Tenderheart, Explorer, Pioneer and Patriot. Each is associated with a person who’s “made a positive impact on our country.” Examples include Harriet Tubman and Dolley Madison—as well as Eliza Shirley, who founded the first Salvation Army Corps in America.

I’m not pleased with those examples, either, TBH. Maybe they also reference Florence Nightingale but the reason I went to a devil’s advocate is to be confident she pulled the most devout and feminine role models in the handbook.

Compare the groups Oath to the Girl Scout Promise, which goes:

On my honor, I will try:
To serve God and my country,
To help people at all times,
And to live by the Girl Scout Law.

AHG’s update is damn near identical, except God is presumably obligatory: “I promise to love God, Cherish my family, Honor my country, And serve in my community.” And religiosity pops up constantly. The welcome letter of the group’s handbook sets the tone:

“Welcome to the American Heritage Girls! I hope that you find your time in AHG to be filled with adventure and fun. The AHG program will help you learn many things about yourself and about God’s purpose for your life. May your times be memorable and may you truly become a woman of integrity who loves God, cherishes her family, honors her country and consistently gives service to others.”

Like most of Cuckservatism, what it says is not as objectionable as what it doesn’t say. It’s not possible to be a woman of God without being under a man’s authority. It’s good to teach a mother to cherish her family now that they increasingly murder their own kids, but more important is that she honors and obeys her husband specifically… not “others” generally.

The American Heritage Girls’ Creed lists 10 “traits of a girl of integrity,” including:

Compassionate
Helpful
Honest
Loyal
Perserverant
Pure
Resourceful
Respectful
Responsible
Reverent
Each is illustrated with a Bible verse. The badge program features lots of relentlessly practical skills that’ve got nothing to do with religion, like fire-building, cake-baking and money management. But they’re often illustrated with tangentially related Bible verses.

A good list. Christians don’t make a sharp distinction between religious and secular behavior. Most other religions don’t, either. But atheism does. “Believe whatever you want but do as you’re told.”

It’s the “Personal Well-Being” frontier that’ll really make you feel like Alice tumbling through the looking glass. Sure, there are badges about stamp collecting and personal style, for instance. “All God’s Children” teaches about the disabled, but it’s often through Bible verses. “Best Me I Can Be” crams in hand-washing and dentistry, plus manicures (“visit a nail salon”) and modesty (“Consider visiting a modesty website such as Pure Freedom to learn more about this important value”).

Described elsewhere as “head, shoulders, knees and toes.” A profitable message to all young ladies.

There’s a “Bible Basics” badge (“God has given us a wonderful gift — an instruction manual on how to live our life according to His will”). Girls are encouraged to read the books of Ruth and Esther, in particular.

Good as far as it goes. Did they read the part where Esther abandoned her people to die rather than risk her own safety? And do they read about Sarah’s loyalty to Abraham?

Perhaps the most fascinating is “Daughter of the King,” which delves into a personal relationship with God. Tasks include talking to a mom or mentor about what “purity and self-respect” mean to her and considering “what should you think about during your next shopping trip to make sure that your clothing is pleasing to God?”

Protestants take that “personal relationship” thing way too far even in the context of men. God is not your friend. He has sworn to kill you. You won’t go far into Christian mysticism before realizing that God is occasionally a real piece of work, able to help but not willing.

Scouts are encouraged to visit the Creation Museum to complete the badge. The group has also launched a “Respect Life” badge, the Blaze has reported, and according to their press releases, recently sponsored a Youth Rally at the March for Life. (It’s not strictly an evangelical group—there are largely Catholic troops, for instance.)

It’s natural for parents to want to raise their children in a way that reflects their own values. But it seems pretty obvious that the American Heritage Girls is pushing an agenda far harder than the Girl Scouts of America.

My stunt double drinks your salty tears, Trigglypuff. Your values can’t reflect a Stairmaster, let alone the God of Creation.

So, is AHG a beneficial organization? It’s obviously a Cucked organization, which makes it unreliable at the national level and unlikely to long endure. But local implementation can certainly be beneficial. Research for this post has found material ranging from outrageous “father-daughter” dances to much-needed teachings upon modest clothing.