I’ve already documented the destruction of American icons such as the teardown of Silent Sam and the renaming of George Washington University’s Colonials to “Hippos”. (As of today, Breitbart announced it’s official that the Colonials and mascot George are officially about to be removed. Officially speaking. Ah, bureaucracy, not even the Socialists can overcome you.)

But all is not well in Commie-Land. They’ve succeeded so easily and quickly in killing our history that they’ve run out of targets. Time to eat their own!

San Francisco will spend up to $600,000 to paint over historical artwork at a public school depicting the life of George Washington, a mural once seen as educational and innovative but now criticized as racist and degrading for its depiction of black and Native American people.

Double Derp in the first sentence! Part one, $600k to repaint a couple walls?

Most of the $600,000 earmarked for the project will go toward a required environmental review and to cover expected legal challenges.

Oh, right. $1k to paint the walls and $599k for bribes and lawsuits. Greed much?

Part two, “a mural once seen as educational and innovative but now criticized as racist and degrading for its depiction of black and Native American people”? Not hardly.

In addition to depicting Washington as a soldier, surveyor and statesman, the 13-panel, 1,600-sqaure foot mural at George Washington High School contains images of white pioneers standing over the body of a Native American and slaves working at Washington’s Mount Vernon estate in Virginia.

That’s right, folks, these murals were painted by card-carrying Soviet Russian Communist Victor Arnautoff who used the opportunity (and New Deal taxpayer money) to depict George Washington as an evil Native American-murdering slaver. And that’s patriarchy, yo! We can’t be saying nice things like that about old George. 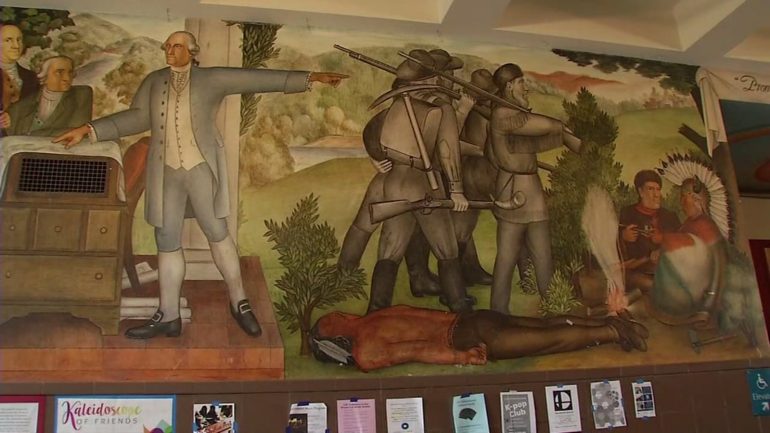 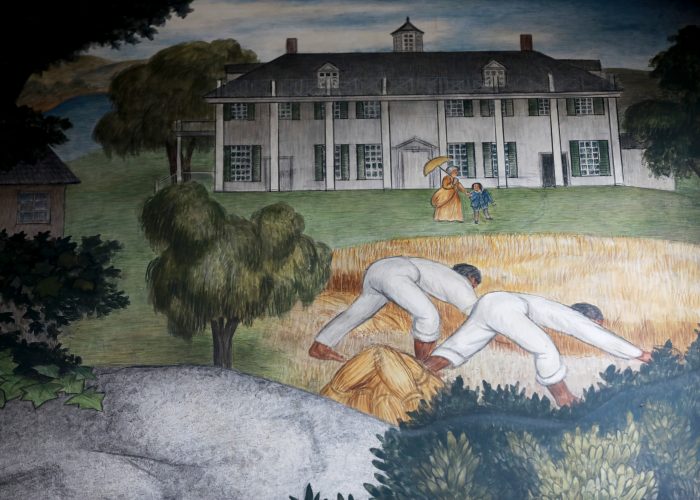 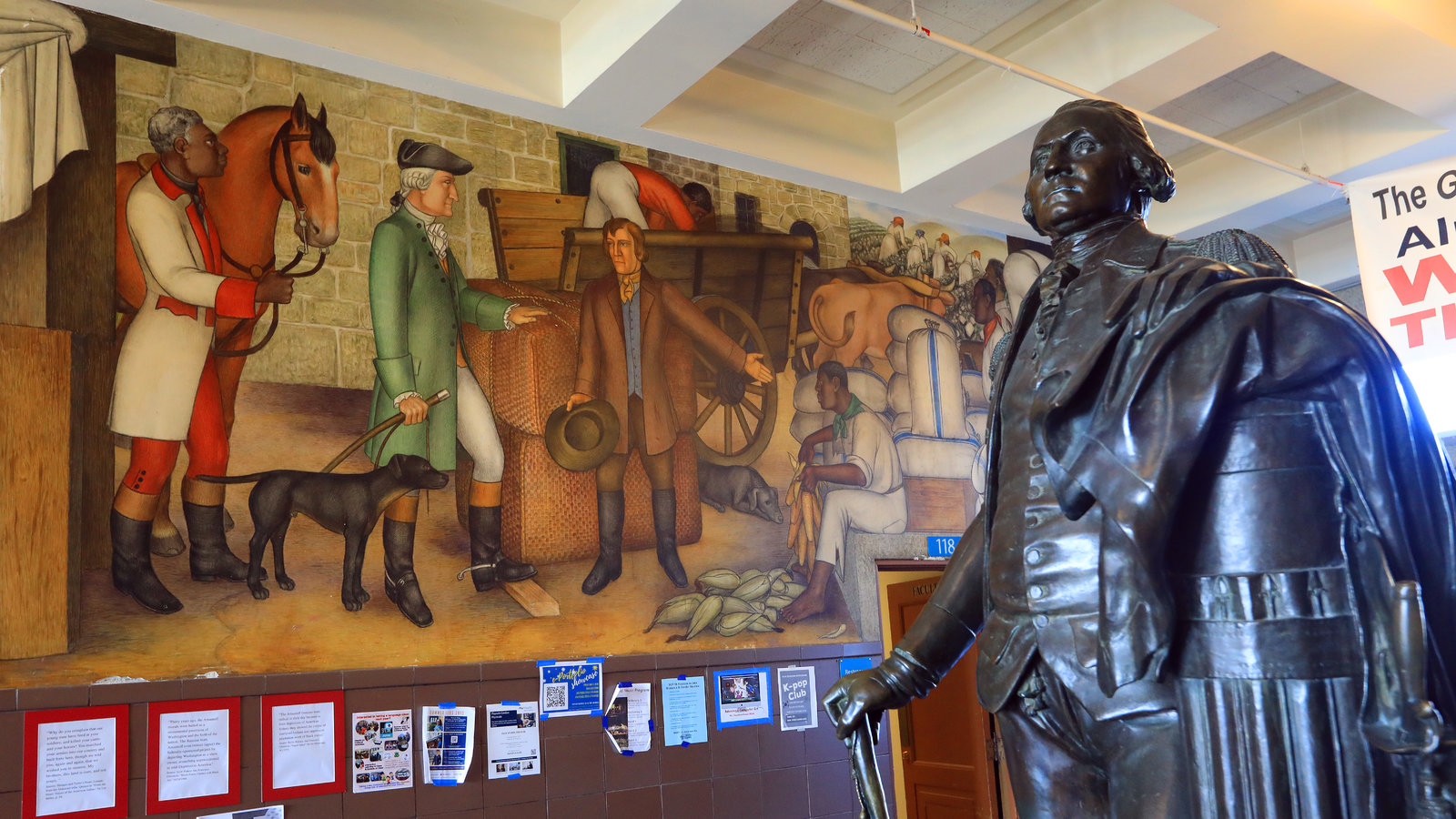 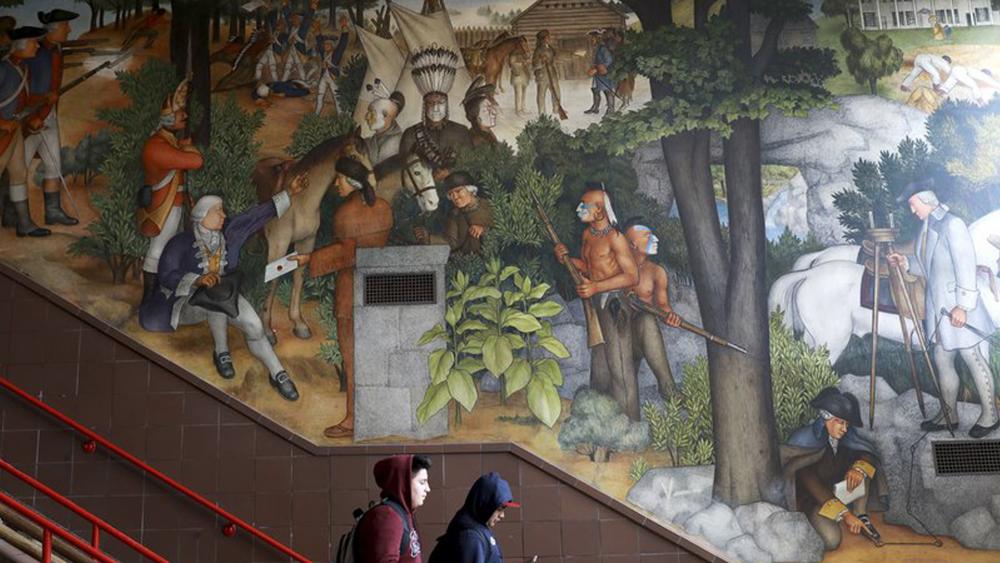 It’s legit artwork but not pro-American. Y’know what, they can paint over this one. I’m okay with the loss of this totalitarian Marxist contribution to ‘Murica but only so long as they cover it up with

The “Life of Washington” was painted by Victor Arnautoff, one of the foremost muralists in the San Francisco area during the Depression. The San Francisco School Board’s decision to paint over the 83-year-old mural is prompting some to worry that other artwork from the so-called New Deal era could face a similar fate because of changing sensitivities.

The board’s decision last week comes at a time when the legacies of Washington and other historical figures who owned slaves are being re-examined. Some cities have changed the names of streets and buildings named after slave owners.

Either the race to the bottom of victimhood is nearing the ticker tape or some high-name eco-Nazi is retiring and wants his golden parachute.

Richard Walker, a professor emeritus of geography at the University of California, Berkeley and director of the history project, Living New Deal, said the Washington mural is meant to show the “uncomfortable facts” about America’s first president. For that, it was among many New Deal works of art considered radical when created.

“We on the left ought to welcome the honest portrayal,” Walker said, adding that destroying a piece of art “is the worst way we can deal with historic malfeasance, historic evils.”

That’s right, Berkeley Boy! You can’t erase the memory of us existing without erasing the memory of why you hate us. Who will be the target of your Two Minute Hates if not us?

Mark Sanchez, vice president of the school board and a third-grade teacher, said students who must walk past the mural during the school day don’t have a choice about seeing the harmful images. “Painting it over represents not only a symbolic fresh start, but a real fresh start,” he said.

That should have worried you about the time “Heather Has Two Mommies” became required reading. Now is a bit late.

Walker suggested rather than destroying the Washington mural, school officials should simply cover it and require freshmen to take a course on slavery and California’s role in subjugating Native Americans.

Father God, do You see how much they hate us? What was our crime? Someone else’s ancestor 250 years ago buying a slave? The blacks still enslave each other TODAY.

To Sanchez, that’s not enough.

“I understand the importance of art, and it should be the last thing we do, to attempt to cover any kind of art up,” he said. “The starting point has to be from those who feel they are harmed and how that is unacceptable, especially given the history of this country. When we don’t listen, we don’t learn.”

Go home, Sanchez. You are not an American and never were. You hate my country, you leave my country. GTFO.

George Washington High School has about 2,000 students. Nearly all are people of color and many come from low-income families.

Which means they’re very nearly as Special Snowflake as a cocaine-trafficking Public Defender. I doubt any additional indoctrination would make a difference.

Arnautoff, a Russian-born communist and social critic, was hired with Federal Art Project funds as part of President Franklin D. Roosevelt’s New Deal, a series of government programs meant to help lift the country out of the Great Depression of the 1930s.

He was one of a group of artists to paint murals at San Francisco’s Coit Tower that prompted anti-communists to delay the tower’s opening.

Good times, good times. Times when anti-communists existed and had a spine. It’s really not that long ago that California was staunchly conservative. *sigh*

Arnautoff’s piece, called “City Life,” shows urban workers crowding around a newsstand of socialist newspapers and magazines. The piece faced criticism for failing to include the conservative-leaning San Francisco Chronicle. 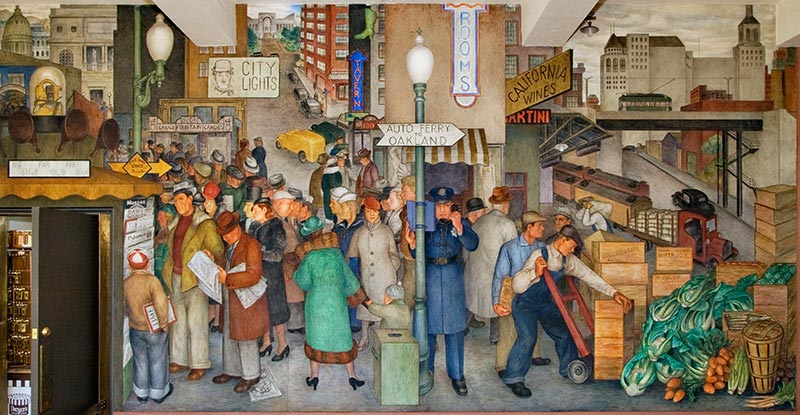 Burn it with fire. It’s the only way to be sure. But I’m willing to settle for his work being plastered over and never seen again.

First we came for the Russians, and they cried as we crushed them—
Because we were Socialists.

Then we came for the Chinese, and they cried as we crushed them—
Because we were Socialists.

Then we came for the Americans, and they cried as we crushed them—
Because we were Socialists.

Then we came for me—and I cried as we crushed me—
Because we are Socialists.