The Gorp (the technical term for trail mix, as in “mixed bag of fruits and nuts”) aboard the International Space Station are acting up again. Here comes another milestone for the Progress of the Human Race!

A NASA astronaut has been accused of committing the first crime in outer space after her estranged wife alleged she stole her identity and accessed her bank account without permission during a six-month mission aboard the International Space Station.

Former Air Force intelligence officer Summer Worden, from Kansas, has been involved in a bitter divorce with astronaut Anne McClain since 2018 but the battle heated up after Worden filed a complaint with the Federal Trade Commission and NASA’s Office of Inspector General accusing her wife of assuming her identity and gaining improper access to her private financial records while orbiting the earth, the New York Times reported.

At least she didn’t assume her gender.

Worden told the Times that she was tipped off when McClain somehow had knowledge about her private spending while on a mission with no way to know otherwise.

She contacted her bank and was informed that her sign-in credentials had been used on a computer registered to the National Aeronautics and Space Administration.

“I was pretty appalled that she would go that far. I knew it was not O.K.,” Worden said.

McClain has denied these allegations, telling the inspector general’s office in an interview last week that she was acting in routine by checking the family’s finances to make sure they had sufficient funds to pay bills for their son.

You know what makes this truly special? Anne McClain was the astronaut who got bumped from the Pages of History because she didn’t have anything to wear for outer space.

Astronaut Anne McClain was supposed to float out of the International Space Station this Friday with newly arrived Christina Koch, to replace old batteries. [Would have been the first all-female spacewalk in human history.] But McClain pulled herself from the lineup because there’s not enough time to get two medium suits ready for them. Koch will go out with a male crewmate, Nick Hague.

Anne, if you had lost those thirty pounds BEFORE lift-off then NASA would have saved $150k in propellant. But never mind, you just set a different First for Humanity’s Space Program: the first child custody spat in space is between lesbians.

I am sooo proud of my species. ET phoned and told us to go home. Back to the main article,

According to the Times report, Worden had a son about a year before she met McClain. After the couple wed in 2014, she refused McClain’s request to adopt the child.

That’s fucked up. It reminds one of that story about Solomon divining who the child’s rightful mother was, except Solomon’s solution didn’t call for burning two witches at the stake. “I don’t trust you around my son but we can still marry.” Oh right, married people get tax benefits. That was one of the original excuses for legalizing gay marriage, they wanted to duck the IRS too. Well, when the divorce courts are done with the Amazing Space Lesbo Team then Uncle Sam’s Vultures can take their turn.

McClain took Worden to court in 2018 to get shared parenting rights after accusing the boy’s mother of having a temper and making poor financial decisions but Worden filed for divorce after now-deleted pictures of her son and McClain were posted to her Twitter. 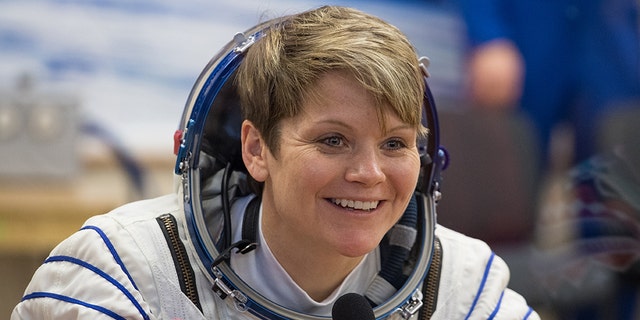 Pageboy haircut… actually understandable in the context of living in a fancy dumpster with moving parts but still, not feminine. But notice the difference in the lower eyelids! That’s the deceptive “New Moon” eye shape on the left, compared to a neutral eye shape on her right side. (The crows-feet on a young face indicate marital/sexual stress, especially when they extend across the lower eyelid, which isn’t happening here. Older people develop crows-feet along with everything else getting wrinkly.) 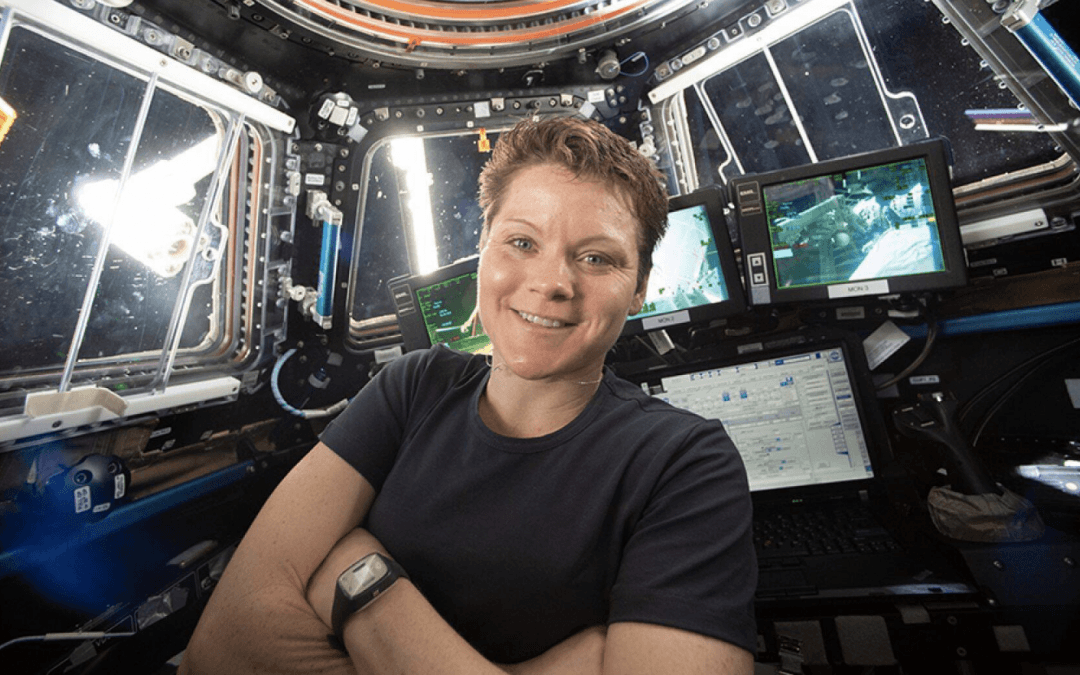 For background on Summer Worden,

Summer on the left. Extremely disorderly hair, unbuttoned shirt and way off-center necklace indicate an extremely disorderly mind. Combined with curved eyebrows, flat lower eyelids, prominent cheeks and masculine jaw, I suspect she’s the BPD emotion vampire of the two. Consistent with her being so egocentric as to either sperm-bank a baby or sperm-jack a man, then formalize a lesbian relationship about a year later.

Summer Worden is a former Air Force intelligence officer and the founder of a tech company who is accusing her estranged wife Anne McClain of hacking into her bank account while on the International Space Station as a NASA astronaut in what could be the first-ever “space crime” investigation. McClain has denied the accusations and says they are part of a bitter divorce and custody battle that has resulted in allegations of wrongdoing by both sides. …

At the center of the dispute is Worden’s 6-year-old son, who was born about a year before she met McClain. According to The Times, Worden resisted allowing McClain to adopt her son, even if they married in late 2014, and in early 2018, McClain filed for shared parenting rights in Harris County court.

According to The [New York] Times, experts and NASA officials are not aware of any previous accusations of criminal activity while in space. Mark Sundahl, of the Global Space Law Center at Cleveland State University, told the newspaper, “Just because it’s in space doesn’t mean it’s not subject to law. The more we go out there and spend time out there, all the things we do here are going to happen in space.”

Lovely. We tasked a team of ivory-tower lawyers with a category of crime that had never been committed… and now that it has, is a standard case of identity fraud which Mark is almost certainly not an expert in.

Summer Worden told The New York Times she became suspicious about Anne McClain’s activities when she realized her estranged wife knew details about her spending that she shouldn’t have. According to The Times, Worden figured out what computers had accessed her bank account and learned that one was registered to NASA. McClain admitted she accessed the bank account while in space, but, through her attorney, told the newspaper that she did so with consent.

It’s standard practice to allow spouses to monitor one another’s standard accounts. In fact, reluctance to share financial accounts is a big red flag for getting hitched in the first place. Anyway, I’m not interested in this crime. If there’s anything the American government can be counted on to do right and fast, it’s spying on its own citizens to find out where the child support payment went.

Summer Worden was arrested in Travis County, Texas, on September 17, 2018, on assault on a family member causing bodily injury charges after Anne McClain accused her of domestic violence. The case was dismissed on March 12, 2019. McClain filed for divorce in October 2018, according to court documents.

In the custody case, McClain claimed Worden has an “explosive temper” and makes poor financial decisions. McClain has asked a judge to give her the “exclusive right to designate the primary residence of the child” if she and Worden can not reach a co-parenting agreement. The case, in Harris County, Texas, family court, is still ongoing. A hearing is scheduled for August 27.

It’s hearsay from a biased source, yet consistent with my prediction that Worden is the relationship’s resident psycho.

Summer Worden is originally from Kansas, where she has been living with her son since her separation from McClain. Worden graduated from Canton Galva High School and then attended The University of Texas at San Antonio, graduating in 1999 with a business degree and aerospace science minor, according to her Linkedin profile. She was in the Air Force ROTC while in college.

Born female, raised male. Daddy’s fault, presuming his existence. But McClain is surely no better off.

After college, Worden served in the Air Force as an intelligence officer, from 1999 to 2006 and as intelligence operations and financial intelligence analyst from 2000 to 2012, leading a team of analysts tracking financial data and funds used by terrorists.

That is… a very relevant knowledge/experience base for exactly this sort of alleged identity fraud. McClain has got to be smart enough to not commit financial crimes via the International Space Station’s heavily monitored communication lines anyway. Sounds like Worden is playing to her strengths.

Worden also worked at the National Security Agency from 2006 to 2008 as an intelligence operations officer. She has a master’s in intelligence and analysis from the American Military University and completed her MBA in energy, systems technology and finance at Rice University in 2014.

According to Lesbians Who Tech, Worden took part in a White House LGBTQ Tech & Innovation Summit during the Obama administration. The website said Worden’s, “broader intelligence work includes serving in Special Access Programs for nuclear security and terrorist finance tracking, where she collaborated with the Department of Treasury, International Monetary Fund, and various IC agencies.”

We’ve seen enough. If one of these wimminz is spying on their other and dealing shady with the online identities and finances, we know which one it is.

Worden, who is now working in real estate, founded Filly Intelligence LLC in 2012. She wrote on Linkedin, ” private technology security firm that has been built upon the people, technologies, and best practices from the National Security Agency, Air Force Nuclear Security program, Defense Intelligence Agency, DARPA, and the U.S. Secret Service. We design and implement comprehensive security services to protect the operational, digital/IT/Cyber, and physical environments. We build a high level of security with a lower level of friction; our operational solutions strengthen national security and increase the economic business competitiveness of our clients. Filly Intel is a Woman-Owned and Service-Disabled Veteran-Owned Small Business (SDVOSB).”

*angry sputtering* Summer Worden’s middle name must be “Entitlement Princess”. She got a free ride straight to the top of both the intelligence and finance communities, and by “top” I mean Sitting President Obama personally, yet her Full-Diversity-Approved, Top-Secret-Compartmented-Cleared, Woman Owned national security company is already dead and ghosted off the Net. God only knows if the cause was incompetence, a hushed-up incident or simple baby rabies.

God, I hate to think how many Defenders of the United States are diversity hires getting favorable treatment just because they aren’t white men.

Worden is bat-spit crazy. Never mind physiognomy, this is from the Hot-Crazy Matrix. She’s been given the Princess Treatment since college and looking back at her pic, yeah, I bet Worden used to be hawt also.

Truly, McClain is boldly going where no woman has gone before: finding out first-hand why men live and die by the Hot-Crazy Matrix.