A new diversity & inclusion behavior that you haven’t seen in the headlines is “Straight Pride” marches. There’s pushback against the homos, it’s just getting the silent treatment, but that dam is beginning to break.  Enjoy a day trip to the following, safe for work unless you’re in the corporate sector:

STRAIGHT PRIDE FLAG
The Blue and Pink flag, which has represented our community for over 0.5 years, is integral to our movement. Unfortunately, the City of Boston has discriminated against our sexual orientation by denying us the opportunity to raise the flag at City Hall. We will continue to fight for equality until the Walsh administration embraces our community and a more progressive vision of the future.

Women Of Eve have joined together across the country in support of asking the LGBQT community to include the S for straight. Let’s not exclude the women and men of this world that procreate. After all, without us there would be no LGBQT. We are asking for fairness and total inclusion.

And other good stuff. They even have teeth!

Super Happy Fun America reached out to Netflix with an offer to sponsor the 1st annual Boston Straight Pride Parade based upon their reputation as a progressive and forward-looking company. We believed that they would jump at the opportunity to become involved in our young civil rights movement. Sadly, we have learned that Netflix is a heterophobic company steeped in hatred and bigotry. They not only rejected our offer but threatened us with litigation if we did not stop using their name and logo, which is perfectly legal for editorial or informational purposes.

Netflix labelled us bullies and declared that their legal department “is here, it’s queer, and it’s telling you to steer clear.” Obviously, Netflix has no qualms about using their position of power to threaten marginalized groups who are exercising their 1st amendment rights. It appears that their legal department is staffed by gay supremacists who are so accustomed to privilege that our goal of equality for straights feels like oppression to them. In fact, it is Netflix that is acting like a bully. We have every right to inform the public about our attempts to gain sponsors for our parade and their hate will not stop us.

I can’t even fisk that, it’s so good. This is reportedly what Netflix’s lawyers had to say about potentially endorsing SHFA:

You are using the Netflix logo to promote your event, which despite its name is about hate–not pride. That’s gross and deeply hurtful, but it’s also deceptive misinformation and infringes our legal rights. Netflix has nothing to do with your organization or event. Indeed, it’s telling that you feel the need to lie to gain legitimacy.

As if fags get to throw THAT accusation at anybody. This is so unprofessionally worded that SHFA is either making it all up or Christ’s Own /Pol/. And I’ve ruled out the former… more in a minute, but let’s continue with the letter. Emphases mine as usual.

We write to you for two reasons: (1) to set the record straight that you are spreading misinformation about Netflix’s involvement or sponsorship of your organization and its events; and (2) to notify you that you are infringing our trademark and other intellectual property rights and if you do not cease such use immediately we will have no choice but to consider further legal action. Whether you like it or not, you are infringing our legal rights and we demand that you cease doing so immediately.

You should know that we’re unafraid of bullies. Our legal department is here, it’s queer, and it’s telling you to steer clear.

We expect removal of our name and logo from all of your materials within 24 hours. Sincerely,

Whoa, passive-aggressive much, IP Department? I haven’t actually seen Netflix’s logo on their site but this appears to be a pattern of SHFA’s, to offer large/Converged corporations the chance to sponsor their events and Straight Pride Marches, and posting the more hilarious responses for the amusement of the cis-gendered. Which brought me to some independent confirmation:

Needham-based TripAdvisor has sent a cease-and-desist letter to the lead organizer of Boston’s “Straight Pride Parade,” writing that the group is infringing upon the company’s intellectual property rights by using its logo without permission.

The letter, addressed to John Hugo, president of the group Super Happy Fun America that is organizing the controversial Aug. 31 event, orders the group to remove a TripAdvisor logo that appears on its website under the “corporate sponsors” section.

The letter also says that the group’s statement that it is “in negotiations” with TripAdvisor as a “potential sponsor” is completely false.

Written by Bradford Young, one of TripAdvisor’s attorneys, the letter is filled with references to songs by Queen, Lady Gaga, Cher, Village People, Madonna and others.

“I’m Coming Out and saying this clearly: you are infringing upon TripAdvisor’s intellectual property rights,” the letter states.

The company said it chose songs that reflect equality and diversity, and that have been applauded by the LGBTQ community. …

The “Straight Pride Parade” received a permit from the City of Boston in June.

Mayor Marty Walsh previously said that the city cannot deny a permit based on an organization’s values.

I suppose Walsh left off the “not yet”. But this is too good! Let’s go straight to the source material. How many pop references can you find?

The Boston Straight Pride Parade organizers falsely suggested this week that Trip Advisor might be a sponsor for the event.

Trip Advisor just responded with this cease and desist letter, and it is something. pic.twitter.com/FnOVyYqxXx 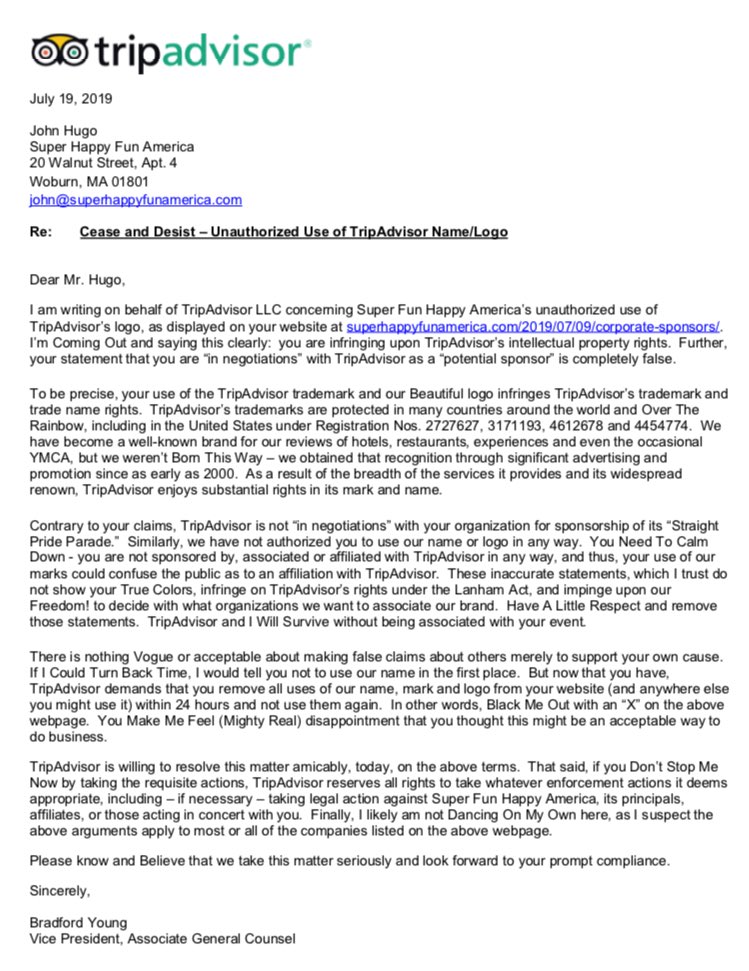 I get sixteen. How can these lawyers Dare To Be Stupid like this? They’re gonna Eat It big-time when their lack of professionalism catches up with them. It’s bad when even the slightest criticism can send them Off The Deep End. BigCorp is giving them Money For Nothing!

Smells Like Nirvana to me but hey, I’m so Tacky that this is like my own, personal Amish Paradise. Us White & Nerdy types, We Perform This Way, baby.

And now, a word about our sponsor:

John Hugo. I’m not certain if he’s got the New Moon eyes–lower eyelids concave, matching the upper concave which the Chinese physiognomists in particular think indicates deception (Hugo’s SHFA is thus an example that not all deceptive tendencies are immoral/evil) …Or if his eyes are simply hooded, indicating emotional defensiveness. (which would be useful in doing something like SHFA). He also a big nose, indicating financial interests. Eyebrows aren’t promising about his intellect. I’m surprised his ears are very flat to his head, indicating conformity, when SHFA is not conformist at all. But in his regular life, he’s an Establishment Republican, so there is that:

Woburn Republican John Hugo officially announces his candidacy for Congress in the MA 5th Congressional district. “I’ve submitted well over the required amount of certified signatures with the Elections’ Division of the MA Secretary of State and I’ve been certified as a candidate” said Hugo.

For nearly a year, John Hugo has been actively reaching out to various Republican and Independent voters throughout the District. “I’ve met with many if not most Republican Ward and Town Committees, along with other grassroots activists. Everywhere I go, I hear the same things: ‘We need someone willing to challenge Katherine Clark. Clark is out of touch with the District and needs to be held accountable for her extreme views and actions’.” Said Hugo … adding “The residents of the 5th Congressional District need a Congressman or woman that will represent the needs of the District and will uphold the Constitution. Clark has failed miserably in this regard.”

Hugo pledges to always first consider how legislation impacts the people of the 5th Congressional District and whether or not the Constitution authorizes the Federal Government to legislate on the matter. “If it’s right for the district, I’ll support it. However not every issue, is meant to be addressed by D.C. insiders that know little about needs and even less about the aspirations of the people living in MA 5th Congressional District. If there is good proposal that is better suited for State action, I’ll use my clout as United States’ Congressman to tirelessly work with Massachusetts Law makers to make it happen. Many if not most, good proposals should be locally administered, where it can be closely monitored by the voters. This is what the Founders intended and the Constitution Requires!” Said Hugo, when asked about his views on limited government.

The 54 yr. old lifelong Massachusetts resident and Arlington native, describes himself as a “working class candidate.” “I struggle to earn a living and pay my bills, like every working person in the district. I believe Founding Fathers envisioned a government where ordinary people, from every walk of life would serve in government for a while and then return to their private lives.” Said Hugo. He pledges to only seek to serve three terms if elected. “I’m a strong proponent of Term Limits. Six years – Three terms, that’s long enough for anyone to be in Congress. Then I’ll return home to live under the same laws I helped to pass.”

If SHFA is a grandiose election campaign then he’s a political artist and I hope he gets the chance to make good on that three-term promise.