This incident covered by Heavy shouldn’t be noteworthy, except it’s probably the last time my generation will ever see it happen. A Methodist church matron shames a skanky teen for being a foul-mouthed fat slob in church! Film at the bottom.

Of course, she was swiftly thrown to the wolves by Pastor Save-A-Ho.

A video of a church leader who followed a girl into the bathroom to tell her she was “too fat to wear shorts” and shouldn’t sing in front of the pews has gone viral after the tearful young lady uploaded the video to Twitter.

The incident was recorded by Twitter user Jenna, who wrote: “This woman followed me into the bathroom and attacked me calling me fat and that I couldn’t wear jean shorts because I was too fat.” You can watch the video below, but be warned that there is some harsh language involved.

Yes, somebody was a potty mouth. Guess which one of the above pics.

It’s a sign of the times that I had a brief, knee-jerk reaction to the first paragraph. I know why a man would follow a teenage girl into the bathroom… because bathrooms deserve to be free and gender-neutral and “Fruity Tony” Epstein is a Sensitive New Age Guy who can be trusted around exposed teenagers… but why would a woman follow a girl into the ladies’ room?

To correct her behavior in private as outlined in Scripture, a protection that Turd World Barbie instantly did away with by pulling out her slutphone for reverse-shaming.

The clip starts with the woman in red, whose name tag reads “Bonnie Sue,” talking about another churchgoer. “She’s a chubby girl. She’s got a dress on that’s appropriate. It comes to the top of her knees.”

Wow. I didn’t think there were any modesty-enforcing women left in the church. This wasn’t about Jenna being fat, it was about modesty while publicly singing in church. Take notes, ladies! You don’t have to become a single mother in Uganda to do the work of God.

Jenna, who is sobbing while the woman confronts her, responds “so you’re calling me fat?” The woman puts her hands on her hips and replies: “Oh. You don’t think you are?”

“No,” Jenna responds angrily. “Because I f–king love who I am. Get the f–k out of my face.”

I like to think that if Bonnie Sue hadn’t chosen to do this conversation in private, this is the point at which Billy Joe would have torn Jenny a new chin.

The woman tells her that she “doesn’t have to” get out of her face, and says “Don’t swear at my like that again.” She also tells her not to come back on stage wearing the jean shorts. “I’m warning you,” she threatens Jenna.

Jenna replies “Who are you? Who are you to tell me what I’m supposed to do? No. Get the f–k out of my face. Get out. I am 19-years-old and I can do whatever I want.”

She performs on stage AND in the powder room!

“Really? Try it,” The woman responds. As she walks away, Jenna follows her back out of the bathroom while telling her that she “recorded the whole thing” and was going to tell her parents.

Don’t let the door slam shut on your asses, Jenny. SJWs like you don’t belong in God’s home anyway.

The video has been viewed over a million times since it was uploaded on June 30 and has nearly 50 thousand retweets, with that number still rising. Jenna went on to post pictures of what she was wearing, which can be viewed above; the outfit consists of a long-sleeved red shirt and a pair of plain jean shorts. Her shirt reads “Agape: God’s unconditional and unending love.” 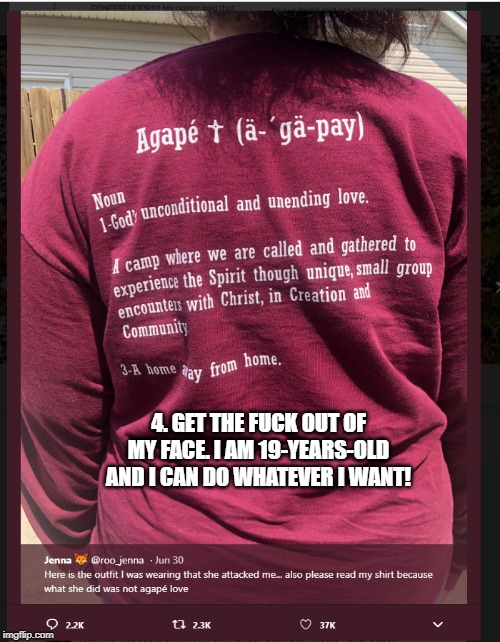 Jenna also explained that Bonnie was actually a church leader who “speaks on behalf of our church at different conferences” and that she was telling other church-goers that it was Jenna’s fault that she would never be allowed back on stage to sing at the church again.

It’s just as well. “Like A Virgin” wasn’t meant to be a Christian hymn, Jenna. 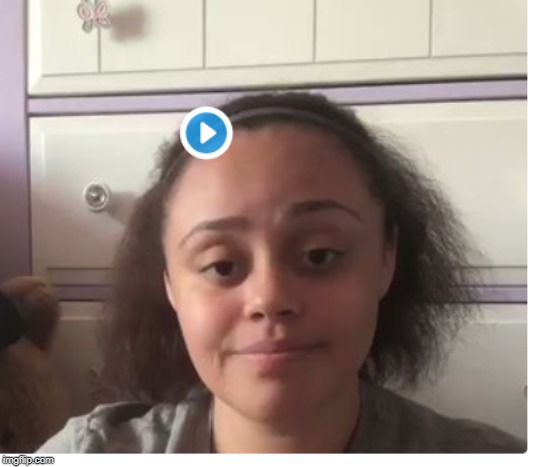 Uneven eyebrows, according to one source, indicate childhood abandonment issues but it doesn’t play out in the attached video.

“My pastor said that she will never be able to be on nay [sic] sort of committee/any leadership role in our church ever again,” Jenna added. “I’m absolutely astonished that someone can have this much hate in their heart.”

One of the main principles of Christianity and Methodists in particular is to “do no harm”.

It has come to my attention that great harm has been done in an incident that occurred this past Sunday where a faithful and very gifted young lady and worship leader was body shamed for her appearance.

We are shocked and saddened by this act. The church is supposed to be a place of safety, love and acceptance.

We are focused on caring for everyone involved in this incident and their families. Our goal is to provide the emotional and spiritual support they need to cope with the spiritual woundedness and also make sure that a just resolution takes place.

We are currently working to assure that nothing like this will ever happen again and will update the church on specific next steps we are taking soon.

The worth, dignity and safety of all who are reached by our ministry is our priority and will remain our sacred trust and duty.

I thought it was California that legalized weed, not North Carolina. What recreational drug is Kevin smoking, to think that a main principle of Christianity is NOT TO HARM PEOPLE’S SELF-IMAGE? What part of “you need a Savior because you deserve Eternal Hell” is supposed to help people feel good about themselves?

She continued: I’m honestly shocked and upset that this happened at church…I should feel accepted and loved and now I don’t want to go back to that church. I love singing in the contemporary band with my friends and being up onstage and praising God with other people.”

But more than singing with your friends, Jenna, you love to dress like a fat slob. That’s who you want to be so I’m forced to admit, your choice is appropriate. Much more so than Pastor Baker’s choice to encourage you in your shameless rebellion against feminine behavior.

Speaking of, what did Pastor Baker mean by “We are currently working to assure that nothing like this will ever happen again and will update the church on specific next steps we are taking soon”?

“My pastor said that she will never be able to be on nay [sic] sort of committee/any leadership role in our church ever again,” Jenna added. “I’m absolutely astonished that someone can have this much hate in their heart.”

And another church dies, having kicked out the righteous for upsetting the tender feelings of rebellious Eve and White Knight Adam.

Here’s the video. The original was embedded in Jenna’s twitter feed and I couldn’t archive it, so here’s the next best I could find.

To close, you probably wonder how Bonnie Sue was able to survive this long in a notoriously Converged denomination like the Methodists. This incident happened on June 30, 2019 and Pastor Baker’s letter was dated July 2… But Baker has only been Pastor at Swanesboro UMC since June 26 per this link.