She had already gotten the house. Joseph was living in an apartment at the time of this.

According to a police affidavit obtained by the outlet, Courtney told officers that “after court the victim and the defendant engaged in a verbal altercation.”

“The victim arrived to her vehicle and attempted to leave the courthouse,” police said. “The defendant followed behind her in his vehicle and began ramming his vehicle front bumper into the back of the victim’s rear bumper.”

That and matching scratches on the bumpers got him arrested. So far, so good, but Courtney wasn’t satisfied.

Between December 2018 and June 2019, Joseph loses access to his house and kids.

14 June 2019: Joseph follows Courtney to the camp their children are staying at, gets arrested for aggravated battery with a deadly weapon. Quote: During the arrest, he told the officer that Courtney was “a man hater and an asshole.”

Nobody said he was wrong.

14-15 June 2019: Courtney files and is granted a domestic violence restraining order. A hearing for extending the DVRO is set for 28 June. And with that hot little paper in her hand…

Courtney Irby… gathered her estranged husband’s guns [from his apartment, that she had no lawful access to] and brought them to the Lakeland Police Department on June 15.

Irby told police that her husband, Joseph Irby, was in jail for trying to run her over with her car and had gathered his guns after a judge ordered him to turn them over.

Officers called her husband, who was being held at Polk County Jail, and he told police that he wanted to press charges.

Irby was charged grand theft of a firearm and armed burglary.

Serves the dumbitch right. Look, Courtney, disarming him isn’t going to keep you safe if he’s already tried to run you over with a truck. Men don’t need guns to kill. What’s the State going to do, take away his guns, knives, vehicles, wires, pipes, saws, hammers, sticks, matches, glass panes, rocks, pillows and Happy Meal toys? Maybe instead of taking away his ability to inflict violence, you should have tried to take away his motivation by treating him nicer than breaking into his home.

“He wasn’t going to turn them in?” How does she know? He never got the chance.

Joseph also requested a restraining order against Courtney, accusing her of being “(volatile) and aggressive during divorce proceedings” and making false statements. He claimed that Courtney had “previously stolen a third firearm which is still in her possession. I didn’t report this gun as stolen because she has tried to portray me as the aggressor and I was advised that pursuing this would poorly reflect on me for ‘trying to get the gun back for aggressive reasons.’”

His request for a temporary injunction was denied but a hearing is set for June 28.

That’s not just twisting the knife. Her defense as described by Heavy is she was only carrying out a judge’s order. If she had one of his guns still in her possession after “turning them over” then that defense is sunk like the Bismarck.

The article has this to say about red flag legislation:

LPD spokeswoman Robin Tillett told the outlet that while the situation was “complicated,” Courtney had no right to enter her husband’s home.

Polk County Sheriff’s Office spokesman Brian Bruchey explained that there is no automatic enforcement mechanism to take guns away from people who have been ordered to hand them over as part of a pre-trial release.

“We really don’t have authority to take firearms from people unless they are surrendered or there is a court order,” Bruchey said. “We can’t do anything, unless they willfully do it — release them to us.”

“Technically if the person does have firearms they are in violation of the injunction or pre-trial release but it’s one of those things — it’s kind of hard to enforce, really. You’d have to have somebody to say ‘I know exactly where they are’ … and you’d have to get a search warrant for it. It’s one of those things you hope people do the right thing and surrender their guns,” Bruchey explained.

“It’s kind of hard to enforce”, yeah, I bet. That continues to be the major roadblock in forcibly disarming the innocent men of America: no gov’t agent is dumb enough to kick in the doors of armed men who don’t trust the State for many good reasons, not to mention the gov’t agents who quietly sympathize with us. Leftoids pass all the laws they can but nobody wants to be first in line for the T-shirt. 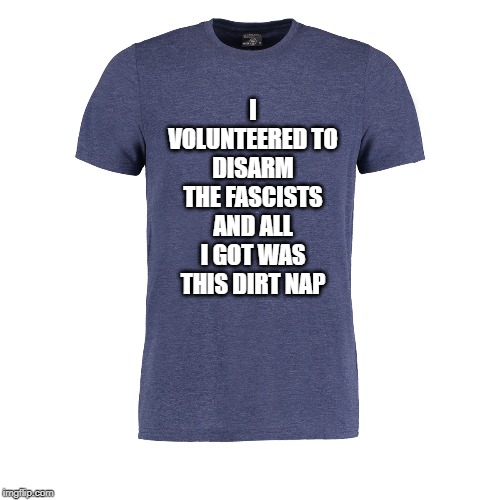