An ounce of prevention is worth a pound of cure. Or in this case, an ounce of “don’t let jihadists into North America” is worth at least two months of FBI skulduggery.

Mustafa Mousab Alowemer, 21, is a Syrian refugee living in Pittsburgh, Pennsylvania that was arrested today for planning a terrorist attack on a Christian church.

A narrow nose with no flaring at the tip & nostrils can indicate a lonely childhood, consistent with the small mouth indicating disinterest in talking. “Visionary” eyebrows (thickest at the inside) but the inner ear cups are well-defined, so some idealism but not air-headed. Looks like cutting eyelids for sociopathy but the iris is so dark I can’t be certain. No cheeks and a weak chin indicate a lack of personal assertiveness. A good amount of passion to judge from full lips. Seems generally low-testosterone.

I can believe either that he’s a passive-aggressive terrorist (bomber) or a lonely nerd whose interest in big booms was leveraged by informants looking to make good on a plea bargain. Either way, he’s Muslim so he shouldn’t be in America.

According to a Federal complaint, Alowemer was charged with one count of providing material support and resources to the Islamic State of Iraq and al-Sham (ISIS) and two counts of distributing information relating to an explosive, destructive device, or weapon of mass destruction.

A big thanks to America’s FBI agents who caught Mustafa.

Alowemer was born on June 5, 1998, in Daraa, Syria and is, a citizen and national of Syria. He arrived in the United States on August 1, 2016, when he flew into John F. Kennedy International Airport in New York. He was admitted to the U.S. as a refugee in August 2016.

A big Fuck Your Mother to the State Department toady that let Mustafa in.

He wanted to join ISIS and commit terrorist acts on behalf of the organization to punish “polytheists” and “take revenge for our [ISIS] brothers in Nigeria” and “our brothers from al-Baghuz”. Al-Baghuz is a town in Syria. 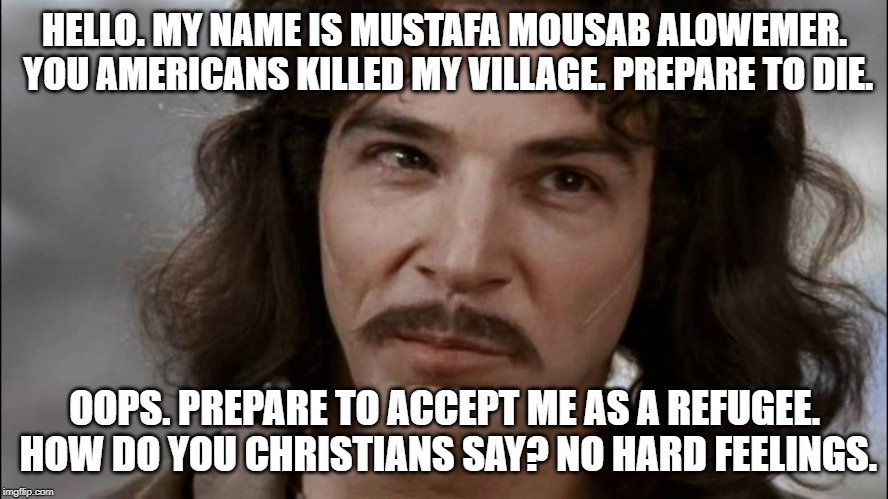 Alowemer plotted to bomb the Legacy International Worship Center located on the North Side of Pittsburgh, Pennsylvania using a homemade explosive device. The Federal complaint says he wanted to bomb the church in order to “support the cause of ISIS and to inspire other ISIS supporters in the United States to join together and commit similar acts in the name of ISIS.” He purchased [readily available materials] to use for making the bomb.

Legacy International appears to be a Charismatic black denomination dedicated to its founder, the late “Apostle” Rodney J. Washington. Wow, their website panhandles so aggressively that Mustafa could have gained entry to the church just by renting it.

Here, Washington visits a victim of the Pulse Nightclub shooting.

Jesus loves you. Jesus also wants to know why you were hanging out at a gay nightclub. Because Jesus doesn’t save unrepentant homosexuals.

Muzzie jihadists say they want to kill Christians but actually target homos. Huh. Well, with churches like this the confusion is understandable.

In fact, that photo could singlehandedly explain Mustafa’s choice of target, if he wanted to “finish what the Pulse shooter started”.

U.S. Attorney Scott W. Brady for the Western District of Pennsylvania said in an announcement, “Every day investigators and prosecutors work tirelessly behind the scenes to disrupt terrorist activity and keep our community safe. While the public does not always see the results of the hard work of these dedicated men and women, this case is a visible demonstration of our commitment to rooting out terrorists and bringing them to justice.”

Their work would be much easier if the Democratic Party (and Republican Party) would give a care about border security.

Alowemer made a video as he pledged “Bay’aa” (an oath of allegiance) to the leader of ISIS, Abu BaIa al-Baghdadi. In several text messages sent in Arabic to FBI agents, he details he asks “can I make the Bay’aawhile masked?” and says, “Brother, I will send you the Bay’aa video and you save it because I want to delete it from my device.”

He then sent them the video and confirmed that they received it. The video has not been made public and was not posted to social media.

This rules out my “misled nerd” hypothesis. That video’s gonna look good in front of a jury.

The author could have phrased that better. Wait, his pseudonym was his real name? “Just use your real name on Facebook. Nobody knows who you are and it’ll make the paperwork on my end a little easier. Did I just say that?”

In May 2019, Alowemer made contact with who he thought were fellow ISIS supporters but were actually FBI Undercover Employee (UCE) and/or an FBI Confidential Human Source (CHS). He met with the agents 4 times between April 16 and June 11. During the meetings, he detailed his plan to bomb Legacy International Worship Center, a church located at 2131 Wilson Avenue on the North Side of Pittsburgh, Pennsylvania and provided the agents with detailed plans, maps, and instructions for the bombs he was allegedly making.

According to the Federal complaint, on May 24 he sent the UCE agent a “Beginners Course for Young Mujahedeen” which contained “nearly 30 pages of instructions related to jihad, military operations, organizational protocols, and explosives.” and provided “step-by-step instructions to manufacture explosives, toxins, poisons, and IEDs, including “TNT,” “Molotov Cocktails,” “Popular Landmines/IEDs,” “Sodium Bomb,” “Black Gunpowder,” and “Ammonium Nitrate 2.””

Easily accessible reading material from howtomurderAmericansforAllah.com? Or did one FBI agent provide the materials and a second agent receive it? I’m tempted to see how easy it actually is to get such info online but fear “Omar” would appear and nag me to blow up a Federal building. My tax dollars at work!

Alowemer also distributed these plans via social media networks to other ISIS supporters, requested a silenced weapon from the FBI agent, and offered up potential targets in the Pittsburgh area.

While I’m glad it worked out to America’s advantage this time, such infiltration and betrayal is the most common play in the FBI’s playbook. Does it work? Yes. Am I pleased that a major law enforcement organization’s primary tactic is identical to Social Justice Convergence? Not a bit.

I want to believe that the story here is the courageous FBI doing what it takes to collar the bad guys, but they do so much dirty pool that I can just as easily believe they let him into America because they knew he was a jihadist and could use him for a Judas goat.

Instead of running networks of informants, agents provocateur and moles, and covering up the embarrassing incidents when the informants wander off the plea-bargain reservation, I’d rather see the Federal Government not allow Muslims from America-involved war zones to enter our nation in the first place.