Second Amendment deniers are reaching some truly silly extremes to make armed citizenry seem a recent, unhealthy phenomenon. This latest effort provides a summer reading list for you in addition to entertainment.

At the end of May, it happened again. A mass shooter killed 12 people, this time at a municipal center in Virginia Beach. Employees had been forbidden to carry guns at work, and some lamented that this policy had prevented “good guys” from taking out the shooter.

It would certainly have been nice to have the option.

This trope – “the good guy with a gun” – has become commonplace among gun rights activists.

Where did it come from?

We got off the boat in the New World and were hungry for meat.

On Dec. 21, 2012 – one week after Adam Lanza shot and killed 26 people at Sandy Hook Elementary School in Newtown, Connecticut – National Rifle Association Executive Vice President Wayne LaPierre announced during a press conference that “the only way to stop a bad guy with a gun is a good guy with a gun.”

Ever since then, in response to each mass shooting, pro-gun pundits, politicians and social media users parrot some version of the slogan, followed by calls to arm the teachers, arm the churchgoers or arm the office workers. And whenever an armed citizen takes out a criminal, conservative media outlets pounce on the story.

That’s because you Leftoids never stop pushing. First one of you losers runs amok with a gun, then the rest of you losers use the murdering to disarm all the innocents that the first loser missed. Please, think of the children and learn a second tactic.

But “the good guy with the gun” archetype dates to long before LaPierre’s 2012 press conference.

There’s a reason his words resonated so deeply. He had tapped into a uniquely American archetype, one whose origins I trace back to American pulp crime fiction in my book “Hard-Boiled Crime Fiction and the Decline of Moral Authority.”

Okay, this is new. A second tactic!

Other cultures have their detective fiction. But it was specifically in America that the “good guy with a gun” became a heroic figure and a cultural fantasy.

Australia: good guy with a gun.

Japan: good guy with a katana.

India: good guy with a saber.

Europe: good guy with a sword.

Antarctica: good guy with a harpoon.

It’s like the Old World peoples had good guys venting bad guys with not-guns only because guns hadn’t been invented yet. Whatever they had first was what stuck in their cultural memories.

Us Americans, we had our God, our guns and our frontiers to be tamed.

Beginning in the 1920s, a certain type of protagonist started appearing in American crime fiction. He often wore a trench coat and smoked cigarettes. He didn’t talk much. He was honorable, individualistic – and armed.

These characters were dubbed “hard-boiled,” a term that originated in the late 19th century to describe “hard, shrewd, keen men who neither asked nor expected sympathy nor gave any, who could not be imposed upon.” The word didn’t describe someone who was simply tough; it communicated a persona, an attitude, an entire way of being.

Most scholars credit Carroll John Daly with writing the first hard-boiled detective story. Titled “Three Gun Terry,” it was published in Black Mask magazine in May 1923.

“Show me the man,” the protagonist, Terry Mack, announces, “and if he’s drawing on me and is a man what really needs a good killing, why, I’m the boy to do it.”

Terry also lets the reader know that he’s a sure shot: “When I fire, there ain’t no guessing contest as to where the bullet is going.”

From the start, the gun was a crucial accessory. Since the detective only shot at bad guys and because he never missed, there was nothing to fear.

The bad guys shot back, though. She’s leaving out a lot.

Part of the popularity of this character type had to do with the times. In an era of Prohibition, organized crime, government corruption and rising populism, the public was drawn to the idea of a well-armed, well-meaning maverick – someone who could heroically come to the defense of regular people. Throughout the 1920s and 1930s, stories that featured these characters became wildly popular.

No, Daley, not “well-meaning”. Moral. Christianity was a thing back then. And don’t pretend America’s heavily armed heroes began with the gangsters. Davy Crockett was born in 1786.

Taking the baton from Daly, authors like Dashiell Hammett and Raymond Chandler became titans of the genre.

Their stories’ plots differed, but their protagonists were mostly the same: tough-talking, straight-shooting private detectives.

In an early Hammett story, the detective shoots a gun out of a man’s hand and then quips he’s a “fair shot – no more, no less.” 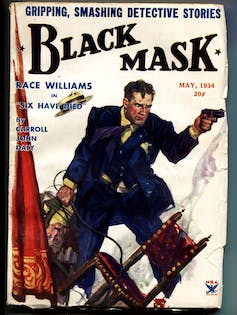 I would totally read something like that on a camping trip. *takes notes*

In a 1945 article, Raymond Chandler attempted to define this type of protagonist:

“Down these mean streets a man must go who is not himself mean, who is neither tarnished nor afraid. … He must be, to use a rather weathered phrase, a man of honor, by instinct, by inevitability, without thought of it, and certainly without saying it.”

She didn’t do that quote justice. Let me try:

In everything that can be called art there is a quality of redemption. It may be pure tragedy, if it is high tragedy, and it may be pity and irony, and it may be the raucous laughter of the strong man. But down these mean streets a man must go who is not himself mean, who is neither tarnished nor afraid. The detective in this kind of story must be such a man. He is the hero, he is everything. He must be a complete man and a common man and yet an unusual man. He must be, to use a rather weathered phrase, a man of honor, by instinct, by inevitability, without thought of it, and certainly without saying it. He must be the best man in his world and a good enough man for any world. I do not care much about his private life; he is neither a eunuch nor a satyr; I think he might seduce a duchess and I am quite sure he would not spoil a virgin; if he is a man of honor in one thing, he is that in all things. He is a relatively poor man, or he would not be a detective at all. He is a common man or he could not go among common people. He has a sense of character, or he would not know his job. He will take no man’s money dishonestly and no man’s insolence without a due and dispassionate revenge. He is a lonely man and his pride is that you will treat him as a proud man or be very sorry you ever saw him. He talks as the man of his age talks, that is, with rude wit, a lively sense of the grotesque, a disgust for sham, and a contempt for pettiness. The story is his adventure in search of a hidden truth, and it would be no adventure if it did not happen to a man fit for adventure. He has a range of awareness that startles you, but it belongs to him by right, because it belongs to the world he lives in.

If there were enough like him, I think the world would be a very safe place to live in, and yet not too dull to be worth living in.

By the end of the 20th century, the fearless, gun-toting good guy had become a cultural hero. He had appeared on magazine covers, movie posters, in television credits and in video games.

Gun rights enthusiasts have embraced the idea of the “good guy” as a model to emulate – a character role that just needed real people to step in and play it. The NRA store even sells T-shirts with LaPierre’s slogan, and encourages buyers to “show everyone that you’re the ‘good guy’” by buying the T-shirt.

The problem with this archetype is that it’s just that: an archetype. A fictional fantasy.

A myth. And the power of myth is not to be disrespected.

We have come from God, and inevitably the myths woven by us, though they contain error, will also reflect a splintered fragment of the true light, the eternal truth that is with God. Indeed only by myth-making, only by becoming ‘sub-creator’ and inventing stories, can Man aspire to the state of perfection that he knew before the Fall. Our myths may be misguided, but they steer however shakily towards the true harbour, while materialistic ‘progress’ leads only to a yawning abyss and the Iron Crown of the power of evil. –Tolkien

Daly has no myths. No hopes, no dreams. She spews lies at us for her present need of disarming us, and to ruin the notion that gun control is hitting your target:

In pulp fiction, the detectives never miss. Their timing is precise and their motives are irreproachable. They never accidentally shoot themselves or an innocent bystander. Rarely are they mentally unstable or blinded by rage. When they clash with the police, it’s often because they’re doing the police’s job better than the police can. 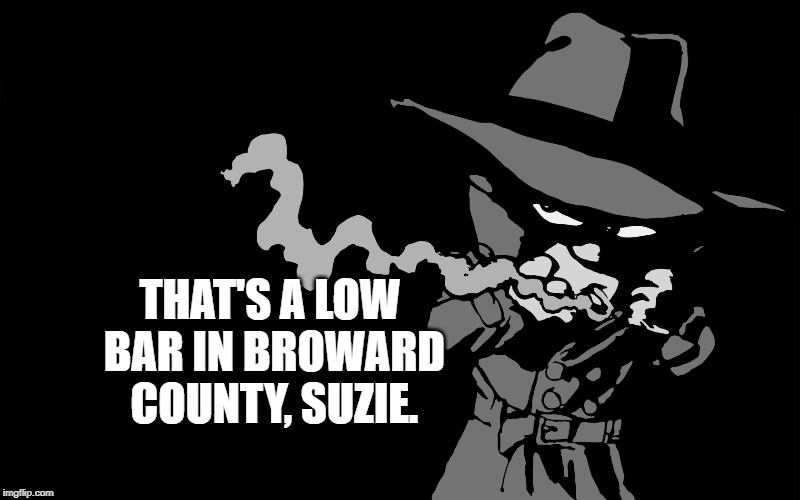 Another aspect of the fantasy involves looking the part. The “good guy with a gun” isn’t just any guy – it’s a white one.

In “Three Gun Terry,” the detective apprehends the villain, Manual Sparo, with some tough words: “‘Speak English,’ I says. I’m none too gentle because it won’t do him any good now.”

In Daly’s “Snarl of the Beast,” the protagonist, Race Williams, takes on a grunting, monstrous immigrant villain.

Could this explain why, in 2018, when a black man with a gun tried to stop a shooting in a mall in Alabama – and the police shot and killed him – the NRA, usually eager to champion good guys with guns, didn’t comment?

What an SJW. How dare the good guys be depicted as white guys for a white audience in a white country by white authors! Didn’t they know that 90 years later, the illegal migrants from Honduras wouldn’t approve?

That mall shooting happened on Black Friday in Birmingham. Two young blacks had a fight, one gutshot the other and a 12yo kid was caught in the crossfire. Police, already set up on-site to handle the Black Friday crowds, responded instantly and shot a young black male brandishing a handgun who was running away from the scene. Turned out he was a bystander who pulled out his CCW in a crowd when he heard shots fired.

He didn’t get shot for being black. He got shot for playing cowboy in a panicked crowd. Daley could have used this story as evidence that vigilante fantasies are unhealthy and she would have had a valid point, but she was too busy playing the race card to notice.

Even in instances where a person is paid to stand guard with a gun, there’s no guarantee that he’ll fulfill this duty.

She has links. I checked one out of vague curiosity. Philadelphia drug dealers packing heat were counted as civilians. It’s technically true, and also true that your gun is likely to be used against you when it’s sticking out of your waistband gangster-style. You bought your piece a chrome job but not a holster? Dude, please.

What started as entertainment has turned into a durable American fantasy.

Maintaining it has become a deadly American obsession.

Carroll John Daly, Dashiell Hammett and Raymond Chandler. Thanks, I’m off to the used bookstore to maintain some toxic masculine fantasies!