He’s a cop cis-male who spoke ill of New Americans flooding our border at the behest of America’s enemies. After many years of service, Bowen finally did something technically punishable.

A year after that, Leftoids noticed this now-former cop didn’t like crooks. Scandal!

I approve of this guy. He’s symbolic of how many police today are put into no-win situations, caught between the violently lawless, the pathetic virtue-signalers and Social Justice-educated, thought-policing superiors.

Many Leftoid publications have covered him in the last 24 hours. This one is only half a hatchet job:

Nothing wrong with this attitude. They ARE mindless murdering savages and drug/child traffickers besides, and the hour is late for the C-in-C to stop this madness.

“Disgusting subhuman shit unworthy of being kindling for a fire,” the 39-year-old Arizona agent said in another text to a colleague who at the time was facing criminal charges for allegedly shooting an unarmed Mexican teenager through a fence.

This is a trend in the stories you can find on him. Lots of discussion about his attitude, almost none about his actual crime.

Two weeks later, Bowen allegedly hit a Guatemalan man with a government truck and then lied about it in a report, according to a court document filed last month in U.S. District Court in Arizona. The filing was first revealed Sunday by the Arizona Daily Star.

Federal prosecutors alleged that the text messages demonstrate Bowen’s history of racial tirades and “great disdain” for the migrants he is responsible for apprehending and asked permission to use the messages in the agent’s August trial.

Felony assault with deadly weapon, okay, he can be tried for that. But why are the prosecutors bringing his ATTITUDE into evidence? Frustration with the border situation is hardly “I wanna kill Niggaz”.

Bowen’s defense attorney, Sean Chapman, argued in a May filing that his client’s sentiments are actually “commonplace throughout the Border Patrol’s Tucson Sector,” adding that his texts are “part of the agency’s culture.”

“[The texts] could be perceived as racist or offensive,” Chapman wrote in a May 5 filing, adding they would not help a jury determine “whether [Bowen], on this occasion, set out to use excessive force to apprehend the alleged victim.”

In another text message sent on Nov. 21, Bowen allegedly ranted to another colleague how Border Patrol was a “fucking failed agency” because “we are treated like shit, prosecuted for doing what it takes to arrest these savages, and not given appropriate resources to fully do our job.”

Heehee. Entering his personal texts into evidence could backfire badly on the prosecution because it frees the defense to introduce other personal texts for the jury to see. His defense lawyer didn’t sound worried.

One begins to suspect this is more about optics & drama than an actual rogue cop.

“I feel like I would def miss certain aspects of it,” said Bowen, who joined as an agent in 2008. “The chase of hunting down shitbags with your crew, defeating somebody who thought they were faster than you.”

That’s one of the rewarding parts of police work. Shitbag thought he’d get away with fill-in-the-blank, ends up begging for a lawyer because he crossed your path. Feels good.

May the Good Lord spare us from cops who want to sympathize with lawbreakers. Or who fear to trade punches.

On Dec. 3, 2017, a U.S. Customs and Border Protection camera operator spotted Antolin Lopez Aguilar, a 23-year-old Guatemalan native suspected of having jumped the border fence, sprinting to a nearby gas station. Bowen and two other agents immediately responded in separate vehicles, according to the federal indictment, and found Lopez hiding under a semi-truck.

While one agent exited his car to approach Lopez, Bowen allegedly circled the station in “his government-issued Ford F-150 truck” and “accelerated aggressively” when the migrant tried to run back toward the border, hitting Lopez twice from behind. According to prosecutors, Lopez was treated at the hospital and sentenced to 30 days in federal prison for the misdemeanor of entering the country illegally.

Prosecutors say that Bowen later filed a false report about what happened that morning, claiming he had been unfamiliar with the car he was driving and wasn’t certain if he actually hit the Guatemalan native.

The day after the crime, however, Bowen “admitted he intentionally hit” Lopez with his truck in a text message to another agent, claiming he just did “used a F-150 to do a human pit maneuver on a guat running from an agent.”

That’s pretty weak but honestly, I don’t see a problem here. Methinks that if Bowen actually ran an F-150 over Lopez, Lopez wouldn’t be whining about it to American reporters the next day. This article doesn’t have the hospital receipt but I bet it’s “five stitches and bruise”.

Bowen was probably being a cowboy and bonked him with the driver’s door. Whatever. If you don’t make work fun then it’s work, y’know? And I have less than no sympathy for a border trespasser.

Three days after the incident, Bowen texted a fellow border agent, saying if he had tackled Lopez, he would still be writing up the incident in “memos and shit.”

“I wonder how they expect us to apprehend wild ass runners who don’t want to be apprehended,” Bowen bemoaned.

A very legitimate question, one that might even play a part in the trial. How WAS he supposed to take down the uncooperative? By definition, criminals don’t obey orders.

The Cult of Nice has infected law enforcement.

Police brutality happens, I don’t deny it, but in this case I don’t see it.

After he was indicted in May 2018, Bowen was put on indefinite leave without pay. He has pleaded not guilty to the charges of deprivation of rights under color of law and falsification of records in a federal investigation. His lawyer and the Tucson Sector of the Border Patrol did not immediately respond to The Daily Beast’s request for comment.

Bowen will be okay. He was antifragile and already had a side gig set up with a couple of his friends. Proceeding to the next article,

The court document listing text messages Matthew Bowen sent to other agents indicate that he was thinking about leaving the Border Patrol before charges were filed against him. He talked about taking classes to become a real estate agent. His attorney, Sean Chapman, also referred to a “trucking business that Mr. Bowen in fact started with two other agents.”

That’s how you do it, if you’re a good guy in Current Year. Never let yourself become dependent on the System. Always have a backup plan.

According to the Washington Post, Bowen began working at the Border Patrol in 2008. …

Matthew Bowen has reportedly been known to use force often in his role as a border patrol agent. Prosecutors, cited by the Arizona Daily Star, listed several incidents dating back to 2012 that they planned to talk about at the trial should Bowen testify.

A Border Patrol Agent developed a bad attitude halfway through Obama’s administration? That’s not a crime; that’s longer than I would have lasted.

The incidents prosecutors mentioned in a court memo included a case from 2012 in which Bowen reportedly pulled a man out of his vehicle and tossed him onto the ground.

In March of 2015, prosecutors said Bowen tackled an illegal immigrant after the suspect had stopped running. His attorney says Bowen received a verbal reprimand at the time. In September of 2015, Bowen was accused by an anonymous agent of bragging about how aggressively he had arrested a juvenile migrant. That accusation of excessive force was never proven, says Bowen’s attorney.

Matthew Bowen is facing two federal charges: Deprivation of rights under color of law and falsification of records in a federal investigation. Prosecutors wrote in the indictment that Bowen had “assaulted” the suspect “through the use of a dangerous weapon” and caused bodily harm.

Excellent work on Heavy’s part, acquiring the actual indictment and related court documents. Lo and behold, Bowen has NOT been charged with felony assault with a car! He’s charged with denying a Squatemalan’s civil right to enter USA without required documentation. Which was his JOB.

There might be substance to lying on record but I give a pass because his superiors were obviously so damn nervous about their line agents’ behavior. Not hard to believe that Bowen was scolded for tackling a suspect so guess what, the next time he used a car door.

“Look, boss! I took him down without touching him, just like you wanted!”

Prosecutors are pushing to have specific messages shown to the jury that they say are evidence of Bowen’s mindset toward migrants.

Turns out, the law enforcer had a generally negative opinion about the law’s breakers.

Bowen wrote on December 7, 2017, “The tonk was not injured at all. he didnt want to go to the hospital but they made him. Its all gotten blown up bc I guess the port director was watching with their cameras.” The term “tonk” is reportedly an acronym for “temporarily outside native country,” according to the Arizona Daily Star, and used in a derogatory way to describe illegal immigrants crossing the border.

TONK! We can totally use that!

Lopez-Aguilar suffered abrasions to his knees and right hand and was taken to a hospital in Nogales, Arizona. He later spent 30 days in federal prison for illegally crossing the border.

As I suspected, five stitches and a bruise. 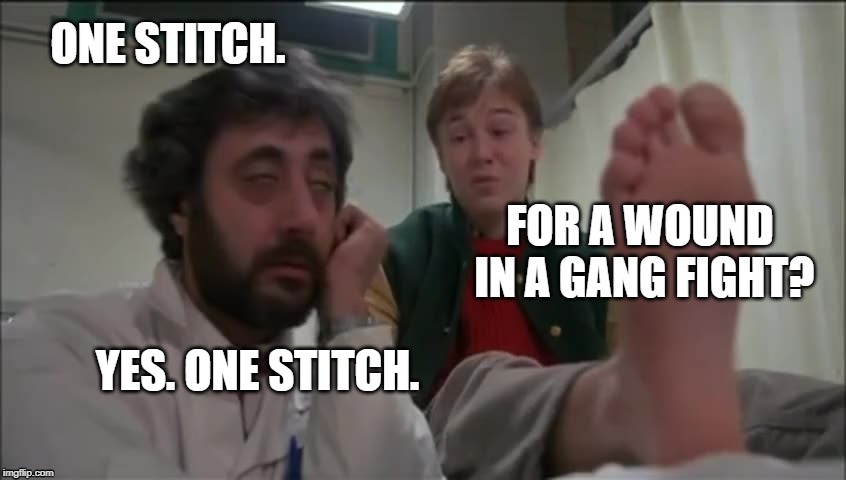 The incident for which Bowen is facing charges occurred in early December of 2017. He was suspended after the charges were filed in May of 2018. His trial is scheduled to begin in August and Bowen has pleaded not guilty.

May of last year. The outrage occurring right now–both of the linked articles are dated yesterday–was apparently triggered when prosecutors filed the evidence of Bowen’s “hateful” texts in court documents filed on 4 April 2019. Although I’m not sure why the additional month of delay… *checks* Ah, the court documents were only made public by the Arizona Sun newspaper on 19 May. Cue the outraged virtue-signaling of Internet NPC mobs.

All the sudden drama over Bowen concerns only his attitude towards the vibrant trespassers he was supposed to take down, but was not allowed to take down. Which in that context, was actually rather good.