Women, why do you need so many clothes? Why do you keep changing them? Do hormones really make you that bloated every month? Do fad diets make your weight yo-yo? I have utterly no interest in the answer but am asking for a friend, the National Aeronautics and Space Administration. 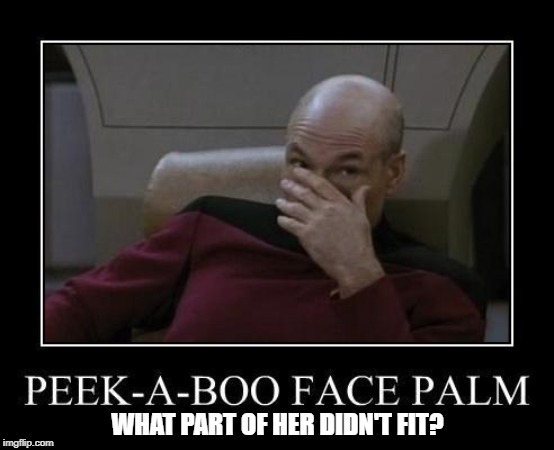 Astronaut Anne McClain was supposed to float out of the International Space Station this Friday with newly arrived Christina Koch, to replace old batteries. But McClain pulled herself from the lineup because there’s not enough time to get two medium suits ready for them. Koch will go out with a male crewmate, Nick Hague.

NASA spokeswoman Brandi Dean said Tuesday that McClain trained before flight in both medium and large spacesuits. She wore a medium when she went out on her first spacewalk last Friday and was supposed to switch to a large this week. But after last week’s spacewalk, she decided that a large would be too big.

I’m too fat! Make it bigger! Oops, changed my mind. It makes my butt look too big for posterior. Posterity, I mean.

It would have taken 12 hours to get another medium spacesuit ready and potentially compromised safety, according to Dean. These spacewalks are months late, and with cargo deliveries coming up, NASA wants to keep everything on track.

In 54 years of spacewalking, women have only gone outside with men. That’s because men have always outnumbered women in space. As women continue to make up a greater percentage of the astronaut corps, more gender records will be set and not just in spacewalking, Dean noted.

It’s not a record when you achieve it by being something instead of doing something. Welcome to Man’s World, Barbie.

McClain, Koch and Hague are part of NASA’s Astronaut Class of 2013, the only time there have been the same number of women accepted as men. NASA chose four women and four men that year.

Is that because NASA suddenly noticed how awesome women were, because their funding requires gender integration or because they wanted to control hypergamy in sexy women by trapping them where only nerds are available for mating? *checks* Anne is fugly so not the latter. Wardrobe malfunction means not the former.

Koch and Hague will continue the battery-swapping work that McClain and Hague began last Friday outside the space station. Old nickel-hydrogen batteries in the solar power grid are being replaced with new, powerful lithium-ion batteries.

NiMH batteries are proven reliable. LiPo batteries, not so much. I hope they know what they’re doing… but thanks for buying the hardware off the shelf instead of spending seven digits reinventing the Baghdad Battery. The money saved will buy SOMEBODY a space blouse.

McClain will get another shot at spacewalking April 8 when she ventures outside with Canadian astronaut David Saint-Jacques. There are six U.S. spacesuit tops on the station — or hard upper torsos, as NASA calls them — with two considered spares. Both Hague and Saint-Jacques take large.

Six suits and nothing to wear? Tell me that’s not a female problem. And comment of the week from the article’s comments, hat tip sickofitall:

yes but when is the gay Muslim gender fluid transvestite going to walk?