Remember the pastor who bought his wife a $200,000 Lamborghini in December? He announced a marriage conference at his megachurch in January shortly after admitting he & his wife have been considering divorce for two years. Now in March, he’s confessed to having an emotional but not physical relationship with another woman… and Oprah Winfrey doesn’t count.

After being on brink of divorce, Pastor John Gray and wife to host relationship conference

Months after megachurch pastor John Gray revealed that he and his wife were on the verge of getting a divorce, the couple announced that they will be hosting a relationship conference, billed “Align,” at their South Carolina church next month.

I didn’t know at the time of my previous post that Pastor Gray had already been openly discussing divorce, although it comes as no surprise.

“ONE OF THE MOST IMPACTING RELATIONSHIP CONFERENCES OF 2019! Join me @myrelentlesschurch and let’s bring in the New Year with a new you! Register for the @thealignconference happening February 7-9th, 2019. Married, singled or divorced, this relationship conference has something specifically for you,” Gray and his wife announced on Sunday via their Instagram accounts.

The conference announcement comes weeks after the celebrity preacher, who leads Relentless Church in Greenville, was forced to defend his decision to purchase his wife a $200,000 Lamborghini Urus for their eighth wedding anniversary.

Gray cited Ephesians 5 as part of the fuel that drove him to lavish Aventer with the expensive gift.

*checks* Per the following links, the conference is Thursday, Sept. 12 evening and Saturday, Sept. 14 morning. Nothing on Friday or Sunday? I’m confused if this is a second conference in 2019 or if it’s only registration that happened in February.

Let’s see if their marriage lasts long enough for them to tell others how to do marriage right. I have doubts. So does the Christian Post:

It also comes months after he admitted to his church that he had marriage troubles. Last summer, Gray opened up about their marital challenges explaining that for about two years they had been contemplating divorce.

“What they didn’t see is that for the last two years we weren’t sure if we would even make it. This is what the people saw,” he said while fake smiling, “but they didn’t see the tears at night. They didn’t see the times when one of us was sleeping on the couch because the argument. We had to keep smiling because even though we were struggling and even though I was failing as a husband, I was already in front of the people and the people can’t receive my brokenness because where do leaders go when they bleed? Because sheep don’t do well with blood so I had to bleed alone,” Gray said.

This is exactly why I want pastors to stop their pathetic AMOGing in the spotlight. Once they accept they’re just like us laymen, merely doing a different job, and they’re nothing special, then they’ll be able to relax and trust us, and we’ll be able to help them out, each according to our God-given gifts. I don’t demand this because I’m jealous of their “success”, as if I’d ever accept an invitation to appear on the Oprah Freaking Winfrey Network. I demand this because I want the best for God, them and me. This kind of burnout is avoidable.

Despite their problems, Gray said God kept moving in their ministry.

“What’s strange is that I traveled the whole world and the Holy Ghost showed up and me and my wife just kept smiling and nobody knew that we were getting ready to get a divorce. Because as long as I kept producing nobody cared what was happening at home. Because as long as we can use you, we will and when you fail we’ll find someone else. Just do me a favor, keep smiling, keep producing, fly all over the world, fight for everybody else’s family while your own marriage is falling apart. While your kids are crying for you every night, wondering when daddy’s coming home but you’re doing the best you can to provide,” he said.

Was anybody allowed to care whether your home was in good order? You just finished admitting you couldn’t trust anybody to see your weakness.

Gray didn’t specify how he failed as a husband but he explained that when his wife discovered that he had started “listening to the wrong voices and let some people get too close … she set it off just like a good wife should.”

Aventer Gray then revealed to the congregation that she chose not to leave her husband despite being upset by her husband’s unspecified actions. She refused to allow the devil to have her marriage.

Whoa, they were doing this together on stage?

“I prayed for them and him and then the devil loses,” she said to applause. “’Cause what’s not gonna happen is you tell me that I’m gonna lose my purpose because somebody whispered to a 16-year-old John? The devil is a liar. I’m staying with my husband and you can go back to the pits of Hell where you came from.”

She added, “So you want me to leave my husband because you spoke to the 16-year-old that couldn’t get a date? And he listened. So I’m supposed to leave my husband because you spoke to a place of brokenness that had not yet been submitted back to the Father? But because I know the tricks of the enemy and I’m learning them every day, I can stand here in boldness for everybody that tried to sneak in, thank you, because I got closer to God because of it. I got in that word … come on devil, you don’t want it with me.”

Sigh, John, you need major, major help. I’m talking cult deprogramming help. The wimminz who raised you, plus your wife, have completely mindfucked you into an empty shell of a kitchen bitch. Readers, what she’s talking about here is Pastor John’s self-description of how getting married turned him into a real man. Segue:

[John Gray] said, “I married a woman two sizes too big. I have to grow into Aventer. She’s a coat. I still can’t fit her. She’s bigger than me and she’s had to cover me while I grow up. I gotta grow into her. She’s a covering, not a lid. Because if a man marries a lid she’ll stop your dream. But if you marrying a covering, she’ll push you to your destiny. Let me tell you something, my wife has endured more pain birthing me than both of our children. She has sacrificed these last eight years, uncovering the painful areas of my manhood and covering the areas that could have exposed me.”

Women aren’t men, John. They cannot teach a boy how to become a man. All that Aventer ever “taught” you was If Momma Ain’t Happy.

And she’s five sizes too big. No healthy-sized woman ever resorted to a trench coat:

That’s why Aventer talked about another woman getting involved with “the 16 year-old who couldn’t get a date”. The happy, free-willed, hopeful John who hadn’t yet learned his place in the matriarchal pecking order.

One should note that the reason John’s marriage is failing is because he can no longer meet his wife’s ever-ratcheting demands. Not because he’s actually done anything wrong. However, he internalizes all the blame as he’s been raised to do. This dysfunction will continue under positive feedback to its inevitable conclusion. John is currently at Stage 8, trying to do all work and all kids at the same time under his wife’s stiletto heel: 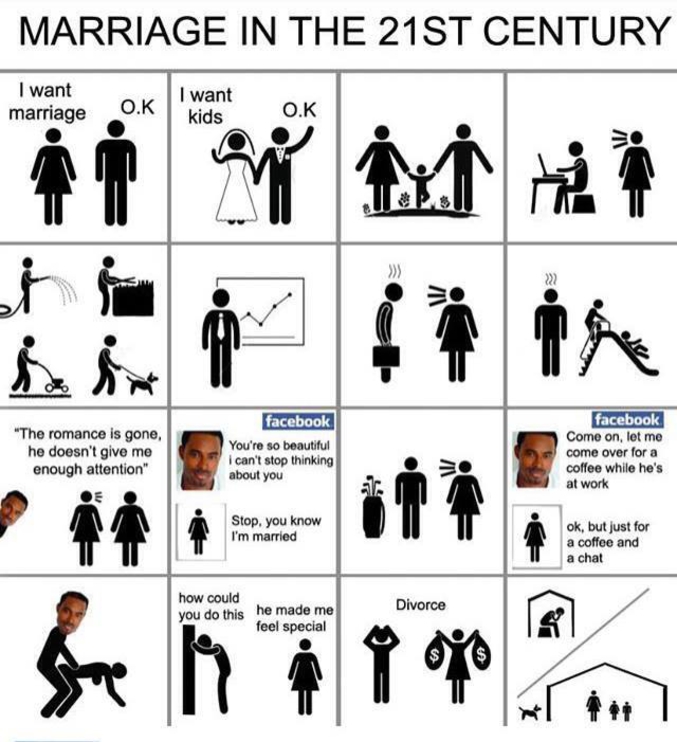 Back to the previous article,

That’s not how Scripture works, Aventer. It couldn’t even stop you from unlawfully claiming to be a pastor. And because Gray isn’t a natural lounge lizard, if he’s looking to other women it’s because you are failing as a wife.

In fact, John is very obviously a low-level, henpecked Delta. My previous post established he also felt guilty for how his father & grandfather treated women, while being raised by women. He’s got a martyr complex wider than Asia.

She noted that she indeed was heartbroken and had him sleep on the couch, among other things. But she did not want to give up on her marriage.

She had him sleep on the couch. In HIS home. Among OTHER THINGS! But she did not want to give up on  her marriage. Lamborghinis are nice.

“However, when the word is inside of you and you know what your position is, everything else is false. I know who I am. I am the rib that God took from him. I’m his rest in brokenness — RIB — rest in brokenness,” she said as the congregation shouted and applauded.

Your husband disagrees, if he’s looking at another woman to cope with the stresses of dealing with you. You pushed too hard, witch; your husband has given up on ever being able to please you. Cue the infidelity, yours or his, that triggers the inevitable divorce.

Now, Gray is saying he didn’t cheat at all and only had an emotional affair.

“Over a year ago, my wife and I were in a very difficult place in our marriage, and in that time, I began to converse with someone — other than a counselor, other than a pastoral leader, which is where I should have taken my issues and challenges — and began to converse, and I was even in the presence of that person one time,” Gray said while talking to the ladies of “The Real” on Monday. “But being in the presence of someone is not the same as sleeping with them. I did not sleep with anyone.”

He also addressed rumors that he got a woman pregnant.

I’m inclined to believe him. John is obviously lonely and cracking under stress but part of his martyr complex involves not fathering children out of wedlock. Which is good as far as it goes. His failing is a very easy step for men whose wives are total pests. They remember the happy young days and it’s an easy trap to re-create them with a cute new thing who acts as if she likes him.

Gray feels guilty for being “in the presence of that person”. I’m pretty sure he means “getting approval from that person”. Female approval, after all, is the goal of his martyr complex. Having exhausted any chance of getting approval from his wife, he’s naturally looking elsewhere… and validation feels as good as sex because sex itself is a form of female validation when she’s free to ‘have a headache’.

Of course, this pattern would only have repeated had he indulged the emotional affair. His root problem is that damn martyr complex. Until that gets fixed, there is no solution, only reboots and eternal chasing of that hit of female approval… destined to end as soon as “she” gets her fangs into his wallet.