At first I thought this a publicity stunt, then just a sad tale of dementia. But the real story is in the reaction. Goodloe Sutton, a has-been journalist with a tiny readership in the South, called for the KKK to ride on D.C. Two working days later, he was unpersoned by his peers.

Goodloe Sutton, the 79-year-old editor and publisher of a small Alabama newspaper founded by his father a century ago suggests that the Ku Klux Klan should robe up and ride into Washington D.C. under the cover of darkness and lynch Democratic lawmakers, elected officials he claims are actually “socialist communists.”

Sutton’s paper is the Democrat-Reporter, a small weekly with a circulation of around 2,000. It wasn’t always struggling and once had a much wider readership, but not unlike many newspapers in small local markets, it’s struggled to survive, it was reported. It’s a relic. And now some are saying good riddance.

This is what he wrote (this report has not been edited):

Time for the Ku Klux Klan tonight ride again. Democrats in the Republican Party and Democrats are plotting to raise taxes in Alabama. They do not understand how to eliminate expenses when money is needed in other areas. This socialist communist ideology sounds good to the ignorant, the uneducated, and the simpleminded people.

People who do not understand the constitution do not like to be responsible. Slaves, just freed after the Civil War, were not stupid. At times, they borrowed their former masters’ robes and horses and rode through the night to frighten some evil doer. Sometimes they had to kill one or two of them, but so what.

This is the same so what used when Democrats got us into World War I and World War II. Then they got us fighting in Korea. Next when the industrial northeast wanted more money, they got us in the Vietnam war, and now in the Middle East war.

If you haven’t noticed, they did away with the draft so their sons would not have to go into battle. Seems like the Klan would be a welcome to raid the gated communities up there they called him compounds now. Truly, they are the ruling class.

On first blush, it’s something a newsman might publish to get enough sensation to keep his 2,000-circulation paper in business. But if this is the original grammar then the guy’s obviously not doing well between the ears. His wife died in 2003, too. The kind thing to do in this situation is ignore the boor, let him rant and die quietly. Probably not even a long wait at this point. 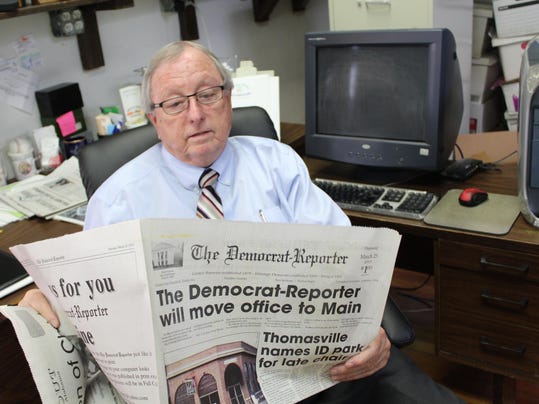 But the Left is displeased!

Editors at nearby small papers, including a collegiate one, saw the editorial.

The Democrat-Reporter in Linden, Alabama doesn’t have a website; it’s strictly ink-on-paper for the couple thousand readers. When the Montgomery Advertiser called Sutton to confirm if he, in fact, wrote the editorial that ran in his paper last week, he said yes, it was him.

Sutton told the paper, “If we could get the Klan to go up there and clean out D.C., we’d all been better off.”

“Asked to elaborate what he meant by ‘cleaning up D.C.,’ Sutton suggested lynching.

‘We’ll get the hemp ropes out, loop them over a tall limb and hang all of them,’ Sutton said.

When asked if he felt it was appropriate for the publisher of a newspaper to call for the lynching of Americans, Sutton doubled down on his position.

‘… It’s not calling for the lynchings of Americans. These are socialist-communists we’re talking about. Do you know what socialism and communism is?’ Sutton said.”

Well, Sutton isn’t wrong about them not being Americans. *Gunner Q points at Ilhan Omar and Mazie Hirono.* But his ranting doesn’t add up because the KKK were Democrats organizing against Republican carpetbaggers. This is like asking Antifa to bike-lock Hillary Clinton. Awkward!

Heck, there was a time people were relaxed enough about politics to enjoy cranks like Sutton. Who amongst my readers is not entertained by Sutton’s October 2017 editorial about the NFL’s kneeling scandal? Here it comes:

“Some of the news programs are making a big to-do about black football players kneeling in the stadiums. That’s what black folks were taught to do two hundred years ago, kneel before a white man.

Feel the burn, Colin Kaepernick! Or this editorial from March 2017:

“Northeastern Democrats are now claiming the Russians fiddled around on the internet to keep Hillary Clinton from becoming president of the United States. True or not, we don’t blame the Russians if they did. America could not survive the incoherent babbling the little Miss Piggy. Also, if America didn’t survive, neither would Russia.

“Thank you Russia for helping us, if indeed you did. More than half the women who voted voted for Donald Trump. It boils down to Hillary just wanting to satisfy her ego. Nothing else, just to be the first.

“Again, thank you Russia, or God, or whoever cut out the little fat oinker.”

Mister Sutton, the Onion is on Line 2. They want to offer you a monthly column. And 4chan is still holding on Line 1.

Sutton and his wife Jean, also a journalist and who passed away in 2003, were graduates of The University of Southern Mississippi. The school of journalism inducted them into their Hall of Fame in 2007.

“Southern Miss graduates, Goodloe and Jean Sutton, lived their lives and shared their journalism careers together, beginning when they both worked on the staff of The Student Printz, Goodloe as an executive editor and Jean as a business manager,” the University wrote. “In 1964, they went to work for The Democrat-Reporter in Linden, Alabama – Goodloe as editor and publisher and Jean as a reporter.” … Southern Miss said the couple was “well respected civic leaders in Linden and in Western Alabama.”

Tuesday afternoon, the University removed Sutton from the Journalism Hall of Fame per the Clarion-Ledger: “The University of Southern Mississippi’s journalism department has removed an Alabama newspaper editor from its Hall of Fame after news broke he wrote an editorial calling for the return of the Ku Klux Klan and lynching….”

That’s two working days from publishing the KKK editorial to being unpersoned thanks to President’s Day. And the Heavy’s article ends with this:

This story has been updated to reflect Sutton’s removal from the University of Southern Mississippi journalism Hall of Fame and to reflect that he is not a trustee nor a member of the Vestavia Chamber of Commerce. His name, and other information about Sutton were listed on the website, but the page was removed after this story was published.

It gets more tragic as we proceed to Wikipedia. Sutton was once a real-deal investigative journalist in line for a Pulitzer.

In 1998, Sutton received widespread acclaim for articles exposing corruption in the Marengo County Sheriff’s Office; he always credited his wife, Jean, “with laboring over courthouse records”. These articles, many written by his wife, led to guilty pleas by Sheriff Roger Davis for extortion, soliciting a bribe, and failure to pay state income taxes on the extorted money, for which he received two concurrent 27-month sentences.

For the series of articles with accompanying documentation Sutton was threatened; the Sheriff, according to Sutton, “started telling anyone who would listen that my oldest son was involved in drugs, my wife was having affairs and I was drunk all the time.” He received death threats and lost circulation and $50,000 per year in advertising in his newspaper; a local church official told him to “lay off the sheriff”. A deputy, Wilmer “Sonny” Breckenridge, threatened to plant drugs in Sutton’s home, according to Sutton. He and his wife were randomly pulled over and harassed, as was their oldest son.

His articles led to a federal undercover investigation, which in turn led to the arrest of 68 people in a drug raid. Breckenridge, who was Marengo County’s chief drug enforcement officer, was convicted of conspiracy to sell drugs and was sentenced to life in prison without parole.

That’s a very respectable achievement and Sutton was duly honored:

As a result of his reporting and editorials Sutton was awarded the Hugh M. Hefner First Amendment Award and the Society of Professional Journalists’ Sunshine Award. He was inducted in 2007 into the University of Southern Mississippi’s School of Mass Communication and Journalism Hall of Fame. In 2009, he received the Distinguished Community Journalist Award from Auburn University. Alabama representative Earl F. Hilliard, an African African, read on the floor of Congress a declaration praising him, saying: “His story is a shining example of the best and the brightest which occurs in America when a single citizen has the bravery to stand alone, in the face of mounting pressure and odds, and stands up for justice and equality.” He and his wife were also the subject of a People magazine article.

Two admiring readers submitted his work for the Pulitzer Prize for journalism, and he had supporting letters from other journalists. When the awards were to be announced a Fox News crew, a TV reporter, and a variety of other reportees were waiting with him, but he did not win.

On the same day Southern Miss removed him from its Hall of Fame, the Auburn’s Journalism Advisory Council rescinded its award for his legitimately courageous journalism. Also, “the Alabama Press Association censured Sutton, saying he “brought disgrace upon newspapers in Alabama and the profession,” and suspended the Democrat-Reporter”. Why? Because while forgotten in his dotage, he swung Left.

That’s the sickness of Social Justice. It doesn’t matter who you were yesterday; if you’re outside the Narrative today then you must be destroyed. Loyalty means nothing to the very people who constantly demand it.

Alabama political columnist Kyle Whitmire, who had worked at the Democrat-Reporter as a young man, published a column in which he speculated that Sutton, now 80, had gone into sharp decline since the death of his wife and might be suffering from dementia or alcoholism.

More than likely, for a celebrated journalist to have grammar as bad as Sutton’s. Shame on the little fat oinkers for sending Boxer to the glue factory!