This story is likely to get buried under the national emergency declaration but Trump did something new: after Cali Governor Gavin Newsom cancelled a hideously mismanaged high speed railway project connecting Los Angeles to San Francisco, Trump demanded Newsom’s administration repay the billions given him for the railway by the Federal gov’t.

President Donald Trump demanded Wednesday evening that the State of California return $3.5 billion in federal funds after Gov. Gavin Newsom canceled most of the state’s high-speed rail project, saying it was too expensive.

“California has been forced to cancel the massive bullet train project after having spent and wasted many billions of dollars,” the president tweeted. “They owe the Federal Government three and a half billion dollars. We want that money back now. Whole project is a “green” disaster!”

I like Trump’s “management by Twitter” style. Not only does it fit the average voter’s attention span, most topics are simple enough to be explained or rebutted in 140 characters or less.

This is an attack vector even I hadn’t thought of: Require state gov’ts to finish whatever they take Federal money to do or hold them accountable! Bwahaha!

Newsom responded that it was “California’s money”:

“This is CA’s money, allocated by Congress for this project. We’re not giving it back.

“The train is leaving the station — better get on board!

“(Also, desperately searching for some wall $$??)”

Lame! “This is CA’s money, allocated by Congress for this project” is an oxymoron. But I love Newsom’s feeble heckle. 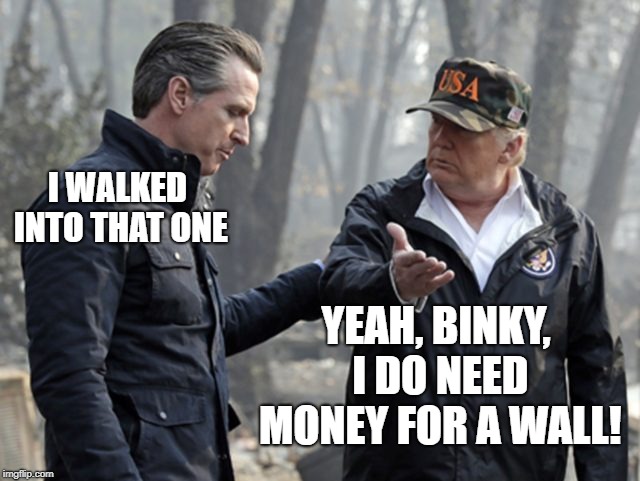 Newsom devoted the opening portion of his first “State of the State” address Tuesday to attacking Trump and his policies on the border. Yet he then bowed to conservative criticism — and, arguably, to fiscal reality — by canceling the high-speed rail project championed by his predecessors.

The governor added that while the bullet train would no longer connect San Francisco and Los Angeles, as first envisioned, the state would still continue “phase one” of the project between the rural towns of Bakersfield and Merced. “I know that some critics will say this is a ‘train to nowhere,’” he said. “But that’s wrong and offensive.”

Not only is it right, but this is exactly why Sacramento wants to criminalize being “offensive”. Telling politicians they’re lying sacks of shit is offensive… and backing it up with photographic evidence like this, doubleplus thoughtcrime offensive: 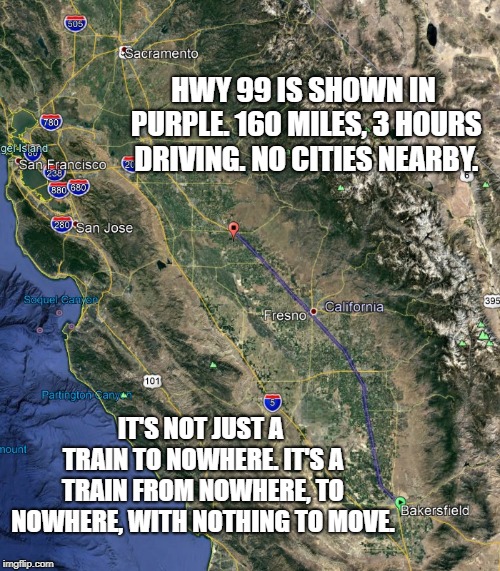 Newsom added that the state had to continue the project if it wanted to keep the federal funds it had taken: “I am not interested in sending $3.5 billion in federal funding that was allocated to this project back to Donald Trump.”

There it is. He’s not shutting down “Phase 1” because if he did, he’d have to repay the money to Congress that he claimed doesn’t belong to Congress.

The money was granted to California as part of President Barack Obama’s stimulus, which set aside “$8 billion in federal stimulus money to create 13 high-speed rail corridors,” the New York Times reported at the time.

Obama pressured states to take the cash — which Democrat-governed states eagerly did. But the Republican wave of 2010 brought new governors to office, and several rejected their state’s high-speed rail plans as costly and unnecessary.

State governments said no to free Federal money? How did THAT story not break?

Hmm… $8b for 13 rail corridors. $3.5b of that went to 1 rail corridor in California. Maybe Obama wanted massive concessions of authority while offering most gov’ts barely enough money for a gift basket in return.

California has already spent over $5 billion on the high-speed rail project — roughly the same amount that Trump had requested for the border wall.

So, we’ve already spent $15b, not $5b. Always triple the official figure. *checks* Wikipedia claims we’ve spent $10.6b. Only double? Shrug, okay. It’s only zeroes.

Wikipedia also gives the official length of the Bakersfield-Merced line at 110 miles so the cost thus far, nothing operational yet, is $100,000,000 per mile. That’s at least two orders of magnitude away from justifiable.

Now if Trump wants to win my heart, he’ll seize $3.5b worth of California assets as collateral. How much is the land along the Mexican border worth? Outside of San Diego, I’m guessing not much. Might be enough left in the budget for a new military base across the street from the Capitol building, to visibly remind California’s leaders who they owe loyalty to. We could call it Fort Sacramento. Or Fort Sack-A-Mental.