Three Yale girls want to stop fraternities from harassing women… by joining them! “He groped me! Let me live in his frat house as punishment!”

Three female students are suing Yale University and nine of its fraternities, asking a federal court to force fraternities to accept women as members. They accuse Yale and the fraternities of allowing “dangerous environments in which sexual misconduct thrived.”…

Anna McNeil, Ellie Singer, and Ry Walker said they’ve had enough of inappropriate behavior by men at Yale fraternity parties. Asked whether they’ve ever been sexually assaulted at one of the parties, all three raised their hands.

Place your bets! Are these women attractive enough to be raped?

“Someone came up from behind me and started grinding on me and then actually pulled up my skirt,” Walker said.

“I was groped from behind. A lot of people were grinding against me from behind, I couldn’t see them,” McNeil said. 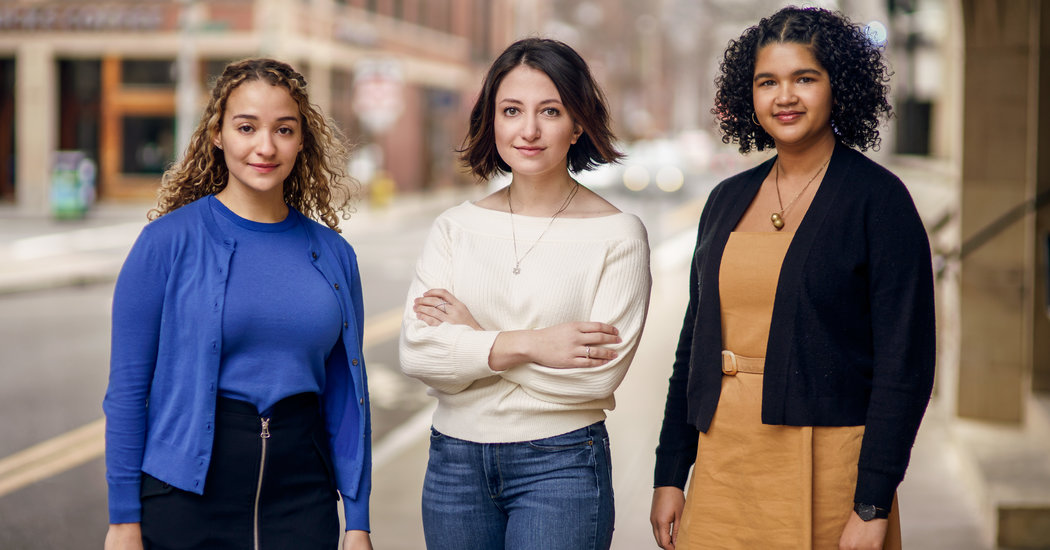 Left to right, Anna McNeil, Ellie Singer and Ry Walker. I can believe Anna was groped–long hair, big boobs–but Walker is lying about being desirable. Nobody wants a fat Diversity case with a Halfro. Ellie’s crudely cut hair is proof she hates men.

In a lawsuit, they alleged “female undergraduates risk sexual harassment and assault by attending fraternity events.” They said men “deny female students admission… based on their appearance, verbally harass them, grind against them, grab them, and grope them.”

“Why do you want to be part of a culture that you’re alleging promotes sexual misconduct?” Oliver asked.

Damn good question! If you’re that unwelcome then why not stay away? Why make a literal Federal case out of a few groups not wanting you as live-in members?

“A fraternity party wasn’t any of our first choice, but it was kind of the only choice for the first couple of months at school,” McNeil said.

I want to party!

“It speaks to the way that fraternities dominate the social culture at Yale,” Walker said, adding, “Those are the places that are open late at night. And those are the spaces that some of our friends are hosting parties in.”

I want to party late with my friends!

“Fraternities offer a vast network of privileges to their members. They offer connections, they offer help networking,” Singer said.

“Some people might argue sororities do the same thing,” Oliver pointed out.

“Sororities don’t tend to have nearly the same connections as fraternities. Fraternities often have people, I think, in higher positions of power. And certainly on campus, they occupy a much higher social space,” Singer said.

Despite all 9,000 female-centric initiatives, departments, laws and related organizations? Women are catered to so much, are academics even a thing anymore?

I can hear the Yale recruiter: “We don’t have any financial aid to offer you but the first thing we teach in Women’s Studies is how to collect punitive damages from innocent men via frivolous lawsuits. Think of all the dick you’ll get when the boys realize you can be as mean as them!”

CBS News legal analyst Rikki Klieman said the case is “enormously complicated.” She’s confused by what she sees as the lawsuit’s contradictory goals.

“If I am someone who goes into a party at the only place available for me to socialize, which is a fraternity, and I am being groped and sexually assaulted and in an environment that I think is unsafe, why do I want to join the fraternity? Why don’t I want the fraternity banned?” Klieman said.

“I think I speak for all of us when I say that banning fraternities isn’t counter to our objectives. We’re adopting the kind of gender-integration model because we think it’s one that’s, you know, more feasible, that’s worked similarly in other contexts in the past,” McNeil said.

This is a variation on the age-old prostitution debate. Are they victims of male oppression or empowered wimmin being equal with men?

The women are part of a group which has repeatedly filed complaints asking Yale to regulate fraternities. “Yale’s response has been deliberately indifferent. Yale has known about the problem of fraternity-related discrimination and sexual misconduct for at least a decade,” said their lawyer, David Tracey.

Mr. Tracey. Male Feminist is becoming a physiognometric template. A good case of diplomat ears… see how the middle of the inner ear cup pokes out past the outer ear cup? For the rest of his face… well, a mullet would be as good as a sex change. I’m paying attention to the flattening of the lower eyelid while the upper eyelid remains rounded. That seems common on male feminist faces and is, I think, a precursor to both the squiggle-eyes of pedoface and the heavy lidding/crows-feet of sexually unwanted men. Don’t quote me yet, though. This is original research. What universities used to do.

Pledges of one fraternity allegedly posed for a photo outside the Yale women’s center with a sign reading: “We love Yale sluts.” 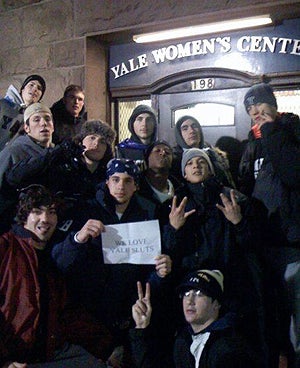 Peaceful protests of love bring a tear to my eye. Next time, bigger sign, lads! You’re doing this for posterity!

Another fraternity was banned after pledges reportedly paraded around chanting “no means yes.”

Generation Z will be A-OK.

A third fraternity faced allegations of turning away women of color because they wanted “white girls only.”

This is Ry Walker’s whining.

Singer said the optimal outcome of the lawsuit would be a “paradigm shift.”

Only a skank could have trouble deciding between being safe and getting molested for a social life. There are other options, like homework! I’m being serious! This is a university! You aren’t supposed to stay up late getting drunk & groped! Aw, man, I just dated myself.

I dug a bit deeper and found out these three women are part of a student group called Engender, today’s reminder that witch burnings were a good idea. Engender has been trying to break open male fraternities while technically but not actually advocating the breaking of sororities.

Over the weekend, dozens of women attended the first set of rush events for the Sigma Phi Epsilon fraternity, which voted over winter break to open its rush process to female students, but will not offer them bids because of the organization’s national regulations.

The female students in attendance were mostly members of the student group Engender, which was created last fall to advocate for a more inclusive social environment on campus. The group currently has 50 members, only a portion of whom are women, according to Will McGrew ’18, a SigEp member and Engender co-director.

That’s sad, man. Women don’t want women’s rights as badly as some men want to give them those rights. Wait… McGrew was a frat member and Engender co-director simultaneously?

Treacherous mole. Per his LinkedIn, he’s a co-FOUNDER of Engender. He betrayed his fraternity in the name of Convergence.

“[Rushees] were curious to know what the goal was,” said Larissa Martinez ’20, another Engender co-director, who attended a rush event on Friday. “Most of them gave me positive feedback on it.”

McKinney Boyd High Valedictorian Larissa Martinez went viral this month when she revealed her undocumented status in her graduation speech. The 19-year-old says her decision to talk wasn’t hers alone.

Nobody accused you of not being a human being, you trespasser. You gonna pay for that education?

There is a system to help young, undocumented immigrants who are called Dreamers. DACA, Deferred Action for Childhood Arrivals, lets qualified students avoid deportation for a time. Larissa doesn’t qualify because she arrived three years too late. Miguel Solis, a Dallas school trustee who also helps train Hispanic leaders, says she should qualify.

You have to go back, Solis. You refuse to obey our laws.

“By her telling her story,” Solis explains, “I can guarantee you there’ll be a multiplier effect for even more undocumented students who know the system isn’t working for them, to come out of the shadows and say we demand something different.”

That’s exactly what the people of the United States are afraid of. You want the trespassers to band together and make demands of we who belong here.

The fraternity’s change in policy came after a group of female students expressed interest in joining. Tyler Morley ’18, the president of SigEp, declined to comment for this article, but told the News in a statement last week that his organization hopes that the inclusion of women at rush events will allow the fraternity to become a more welcoming place while adhering to the bylaws of their national organization that confer membership only to men.

Okay, I see what happened here. Morley chose to let women in even though the rules said the frat was men only, making his the only frat to let women even try in 2017, and the parent organization won the resulting battle. This time around, Engender is resorting to a Federal lawsuit to break in.

Good on the parent organization for crushing the entryism effort. One quick quote:

“SigEp allowed several Engender members to rush events, but the fraternity ultimately denied them membership due to national chapter restrictions on accepting women.”

According to Engender’s leadership, male rushees at the events were open to discussing why women were in attendance.

McGrew noted that the move has sparked on campus conversations about exclusivity as well as the motivation behind those women rushing SigEp. However, McGrew questioned why the actions of these women are seen as “strange.”

Bald-faced lying. Women pushing into a never-before-violated male space is exactly the sort of thing that ought to be seen as strange. Especially when she wants in and simultaneously claims to have been rayyyped inside, although the lawsuit was a couple years after this article.

“Engender supports open access to social events for Yale students regardless of gender, race, class or sexuality,” the group said in a statement to the News. “We hope to work with as many of Yale’s fraternities and other student groups as possible to develop a more inclusive and equitable campus climate.”

Eh, maybe not. Chicks are fun sport but any intelligent guy would lose his mind living among them. That’s why men abandon male spaces when women push in.

Esse added that the group will soon have an official website and plans to publish an op-ed in the News this week.

For the curious, here’s a link. Might not have been what she was referring to, however.

Female students interviewed who attended or planned to attend rush events at SigEp expressed caution, saying that they would feel uncomfortable in a social setting where they would not be seen as potential brothers, unlike men rushing the fraternity.

“I am interested to see how women approach rush differently because they don’t have the same social motivations as their male counterparts — the women rushing risk social alienation, whereas the men rushing can expect a degree of social inclusion,” said Anna McNeil ’20, who plans to attend future rush events this semester.

She also noted that SigEp’s rush process seems less “hostile” than that of other Yale fraternities because it consists of more rush meals and fewer parties.

Surprisingly, she didn’t become a fatso.

The Federal case has no legs. Not only is this an obvious freedom of association issue, but the women making the complaint admit that getting what they want would expose them to high risk for sexual victimhood.

2 thoughts on “Choose the Form of the Destructor 9!”