IBERIA, Mo. – Miller County authorities are investigating after a woman is accused of poisoning her husband, then setting their home on fire.

Authorities initially received a call on Dec. 11, 2018, about a house fire on Janice Drive in Iberia, where Joshua Murray’s body was found inside the residence.

The Missouri State Fire Marshal and the Miller County Sheriff’s Office said the fire was determined to be started by Murray’s wife, Amy, after she allegedly poisoned Joshua with antifreeze.

An autopsy showed Murray died of poisoning, and Amy was charged with first-degree murder and armed criminal action.

Amy allegedly started the fire, then left the home and went to a McDonald’s in Osage Beach [GQ: 22 miles away] with her 11-year-old son and dogs. When she returned to the home, she said the house was on fire, and the smoke was too heavy for her to go inside, according to a probable cause statement.

I can’t say she’s a cold-hearted bitch because she brought the dogs to McDonalds. She didn’t want to leave them in the fire. Which is both humane, heh, and evidence of premeditation on the arson. But I can say her lover was not her husband. 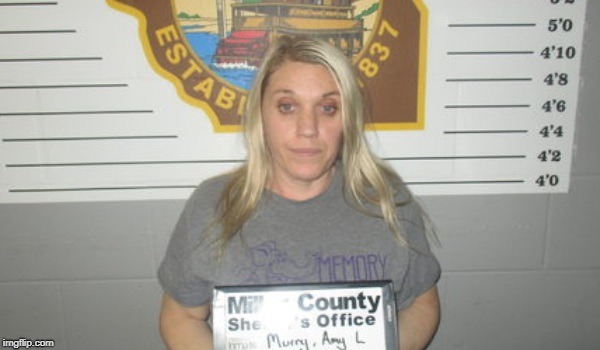 The wife. She has a prostitute’s eyes.

Lover Eugene A. Claypool, convicted murderer. Hmm, their faces are similar enough that Amy could have squinted and pretended that Eugene was Joshua’s bad boy twin.

The population of Iberia is 750 so Amy was probably bored, too.

Court documents revealed Amy had worked as a nurse at the Jefferson City Correctional Center and had a romantic relationship with an inmate.

In recorded phone conversations Amy told the inmate, Eugene Claypool, she didn’t want to be married to her husband anymore and she could marry Claypool because Joshua was deceased and “out of the picture,” the documents said. Claypool previously pleaded guilty to second-degree murder.

The Missouri inmate database provides this information about Claypool:

I tracked down how this burglar turned to murder.

SPRINGFIELD, Missouri — As reported by the Associated Press: “A young man who had been expected to withdraw his earlier guilty plea in the Christmas Day killing of a lottery winner decided instead to accept the state’s plea bargain.

“…Co-defendant Eugene Claypool Jr., 21, was sentenced last October to life in prison for second-degree murder and he’ll have to do 25 years before becoming eligible for parole.

“…The two men are convicted of killing Donald Hardwick, a 72-year-old invalid who had won a $1.7 million Missouri Lottery jackpot in 1998. He was slain at his home on Christmas Day 2000.

“Authorities said Williamson and Claypool broke into Hardwick’s Springfield home searching for $10,000 they believed he had there.

“…Prosecutors say Williamson and Claypool searched the house for several hours before going into the room where Hardwick was sleeping.

“The feeble Hardwick, who couldn’t walk without using a walker, awoke and authorities say Claypool tried to restrain him. Williamson reportedly held a couch cushion over the man’s face while Claypool stabbed him multiple times in the chest and throat.

“A Bible was left on the victim’s chest. When his wife, Edna, got up on Christmas morning she noticed a broken kitchen window. She went to tell her husband, who slept in a separate room, but found him dead…”

Home invasion robbery on Christmas Eve, when any loose cash would have already been spent if I’m familiar with that holiday, and when they couldn’t find the dough they took their frustrations out on a cripple. Then tossed a Bible on the victim’s chest which was either mocking God on God’s birthday or Jeffey in a fit of remorse. Either way, bring back the death penalty!

I wonder if Eugene told Amy that he’d found the money? Joshua died at 37 so not much time to make bank from construction, although he was a supervisor. Amy torching the marital home and not being able to collect life insurance isn’t going to help her future financial problems, either. Dreams of an Alpha with Beta Bucks could easily have triggered hypergamy.

State-mandated beliefs that men are the same as women cannot override reality. Amy gained access to sexy-because-dangerous men through prison work, found “twu wuv” with a convicted murderer who resembled her husband and murdered hubby in order to replace hubby with lover.

What did Claypool get out of it? Assuming he claimed to have that $1.7M lottery money hidden away… but couldn’t access it in his current situation…

Amy talked about getting an attorney to get Claypool released from prison early. 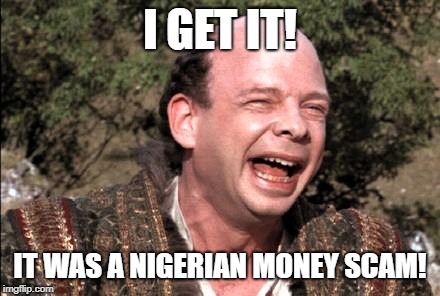