Hatred of white people in America has reached the point where Coloreds can’t tolerate our existence long enough to reeducate us. Thus, white feminists have been empowered to race-police white men… in order to lock us all into the same room.

The cucking of Christianity has been, if anything, understated. Just look at these they-don’t-call-themselves-Christian leaders: (boldfaces mine)

Adrian E. Bracy, MBA, CPA, began as the chief executive officer for YWCA Metro St. Louis on Aug. 17, 2009. Although she moved here from Arizona to assume the position, she is no stranger to St. Louis having previously worked for more than a decade as an executive for the St. Louis Rams. She left to become chief financial officer for the Arizona Cardinals in 2007. What brings her back to St. Louis is what she says is her calling: “to inspire and make a difference in the lives of women and girls.” The YWCA mission, “eliminating racism and empowering women,” is the right fit at the right time in her career and life.

Bracy has received numerous awards throughout her career including: the African-American Women of Distinction Award; Black Enterprise 50 Most Powerful Blacks in Sports Award; Black Enterprise 50 Most Powerful Black Women in Business; St. Louis Business Journal Most Influential Business Women Award and the YWCA Leaders of Distinction Award in Corporate Management.

This professionally racist cunt is in charge of “eliminating racism” in St. Louis. What a joke. Hey, where’s her experience as a Christian? Isn’t that kind of important for the leader of a Christian organization? Did the Arizona Cardinals lead her to Jesus?

She and her husband, Vernon, have one son.

Sounds like she stuck the feminist landing. Does anybody think poor Vernon wears the pants in his family?

Racial Justice Consultant
Mary R Ferguson currently serves as the Racial Justice Consultant for the YWCA of Metro St. Louis. Her background includes teaching and administrative positions at a number of private and public institutions. Most recently Mary was Diversity and Inclusion Leader at Washington University Medical School in St. Louis, after serving as Indiana State University’s Diversity Officer from 2009-2011. She has also been on faculty at Webster University and University of Missouri-St. Louis. Mary came to higher education after spending year in preK-12 education, adult and community education, arts education, and English Language learning.

I made attempts to track down the origin of “Diversity & Inclusion”. It sounds standardized, as if a certain (((billionaire))) was backing it, but there were too many false positives from diversity together with inclusion.

For now, my best guess is that “Diversity & Inclusion” is an iteration of #MeToo, doing for not-Whites what MeToo did for not-cis-males. 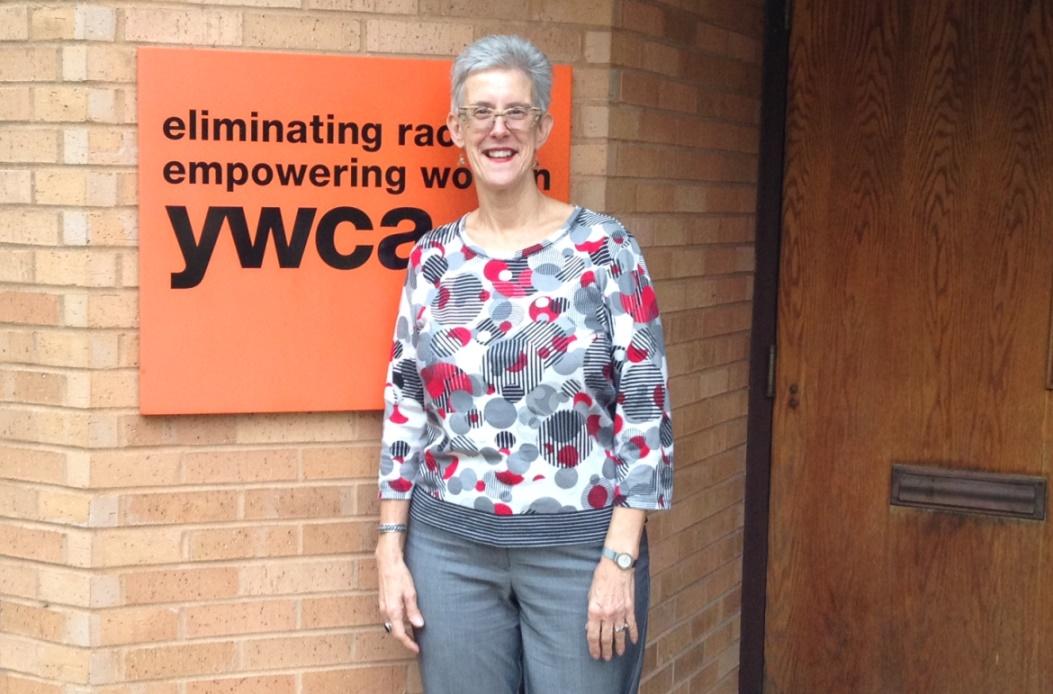 I can’t do physiognomy with this bad a picture of Ferguson but that smile… that’s a cuck’s smile?

Mary brings extensive knowledge of the non-profit and human services world to her work as well. She has held positions with Big Brothers Big Sisters of America and the American Youth Foundation. In St. Louis, Mary has been associated with every major community-based equity organization including the National Conference for Community and Justice, the Anti-Defamation League, FOCUS St. Louis, and the Diversity Awareness Partnership. She provided training to the Ferguson Commission and remains connected to the work of Forward through Ferguson.

Together, these two feminazis have implemented the “Witnessing Whiteness” program. Now the question we’ve been waiting for, how is a whites-only “facilitated discussion workshop” not racism?

WHY A WHITE SPACE?
(Why do we meet as a group of white people?)
For many, it sounds contradictory: “Isn’t it racist if just white people to get together? Isn’t that segregation?” The following are our reasons for organizing as a white anti-racist community:

1. People of color shouldn’t always have to be the ones to educate white people about racism and oppression. We are taking responsibility for learning about racism, our own white privilege, and how to challenge it as white people.

2. In order to challenge racism and dismantle white supremacy, white people need to unlearn racism and discover the ways we enact white privilege. This is a long, difficult, and sometimes painful process. It’s helpful to have a space where other white people engaged in this process can support and challenge us, without having to always subject people of color to further undue trauma or pain as we stumble and make mistakes. Having a community of white anti-racist people gives us hope, helps us grow our practice, and gives us strength to stay in it for the long haul.

3. A commitment to anti-racist identity and practice as a white person can sometimes mean increased alienation and conflict in our lives, especially with other white friends and family who disagree with us. This is a space where we can get support from people who are experiencing similar struggles as anti-racist white people.

5. It’s a place where white people can begin to build a new culture of white anti-racism, and learn the skills needed to transform the larger white community.

6. This group is a supplement to, not a replacement for, multi-racial dialogues and activism between white people and people of color. It’s important that white people give space in their lives to learning from and bearing witness to people of color’s experiences of racism.

7. A white space serves as a resource to people of color who want to work with white people but don’t want to have to spend all their energy dealing with the racism of white people.

Translation, People of Color want to get rid of their white feminist allies. As identity politics take center stage, as planned by our own leaders since 1965, it’s coming time for all white people to go… not just white men. White feminists are buying into this effort wholesale, fantasizing about holding little reeducation camps without noticing that Blacks are segregating ALL whites away from them by doing so.

Fuck You, Daddy! is about to become Fuck You, Whitey!

www/awarela.org This document was created and revised by AWARE-LA through a cyclical process that included small group dialogue, brainstorm, and discussion. It has been used by many to help explain why we do our consciousness raising work with the white community.

The acronym stands for Alliance of White Anti-Racists Everywhere-Los Angeles. How brainsick must one be to call herself a white anti-racist?

Enough to not realize her Allies of Color are quietly nudging her onto the same plantation as the white men she hates. Did Barbie notice, in those seven reasons above, that the phrase was “white privilege”, no longer “male privilege”?

If there’s one good thing about Communism, it’s what Commies do to their useful idiots when their usefulness is gone.