Coming to my attention a year late is Marc “Dr. Doom” Faber, an eccentric economist, low-quality prophet and awesome, kick-ass pundit. Doom was Converged out of his work in October 2017 for unrepentant race realism.

Market doomsayer Marc “Dr. Doom” Faber has launched a racially charged diatribe in his latest newsletter, alleging that the U.S. is great primarily because it is ruled by white people.

The eccentric Gloom, Boom & Doom report author, who often speaks on CNBC and other financial media, generally forecasting some type of market downturn, focused his latest comments on the racial conflicts happening around the country.

(A CNBC spokesperson said it will not book him in the future.)

How mature of them. The only thing worse than CNBC punishing a man for speaking well of its own white customers is the fact that many of those white customers probably couldn’t accept the compliment at face value:

“And thank God white people populated America, and not the blacks. Otherwise, the US would look like Zimbabwe, which it might look like one day anyway, but at least America enjoyed 200 years in the economic and political sun under a white majority,” he wrote.

“I am not a racist, but the reality — no matter how politically incorrect — needs to be spelled out.”

Reached for comment via email, Faber did not back away from his statements to CNBC.

Yes, this is how you do it. Speak truth and do not apologize. Doom still got deplatformed but that was the worst the SJWs could do to him.

“If stating some historical facts makes me a racist, then I suppose that I am a racist. For years, Japanese were condemned because they denied the Nanking massacre,” he told CNBC in an email.

In the newsletter, Faber’s comments address the confrontation in Charlottesville, Virginia, directly. Protesters clashed in August over a white nationalist rally called Unite the Right in Charlottesville, where officials were debating the removal of a Robert E. Lee statue from the University of Virginia campus.

The violence sparked a national debate over race and monuments that honor prominent Confederate figures that Faber decided to weigh in on.

Faber called the monuments “statues of honourable people whose only crime was to defend what all societies had done for more than 5,000 years: keep a part of the population enslaved.”

Ouch. Putting aside the fact that the War of Northern Aggression wasn’t about slavery, Faber has an excellent point. Most societies are at least partly feminized and women don’t accept equality. All men are either above them or below them, and the easiest way for a man to be sexy is to cut down all the men around him. This is the driving force behind slavery in all of its history and forms.

Per Wikipedia, Faber was subsequently asked to resign from the boards of Ivanhoe Mines, Sprott Inc. and NovaGold Resources. U.S-based Sunshine Silver Mining Corp, Vietnam Growth Fund managed by Dragon Capital, and Indochina Capital Corporation also dismissed him, Faber told Reuters. CNBC, Fox Business, and Bloomberg TV said that they do not plan to book Faber in the future. Faber continues to stand by his remarks.

His article isn’t available on the Internet but Business Insider published the relevant excerpt:

In the October edition of his report, which is available only in print and was seen by Business Insider, Faber focused on the economic policies of major governments.

In a section of the report discussing “Free Markets and Capitalism Versus Socialism,” Faber variously decried the tearing down of Confederate monuments as well as what he called the “liberal media” and New York City’s “righteous socialist” mayor, Bill de Blasio.

Faber said contemporary society focused too much on issues like the monuments rather than on issues such as the growing amount of outstanding debt and “unfunded government pension liabilities.” The report then went into an aside regarding his thoughts on the Confederate monuments.

I don’t want to enter into a serious discussion of the tearing down of monuments of historical personalities, but I cannot omit mentioning how the liberal hypocrites condemned the Taliban when they blew up the world’s two largest standing Buddhas (one of them 165 feet high), situated at the foot of the Hindu Kush mountains of central Afghanistan, in 2001. But the very same people are now disturbed by statues of honourable people whose only crime was to defend what all societies had done for more than 5,000 years: keep a part of the population enslaved. And thank God white people populated America, and not the blacks. Otherwise, the US would look like Zimbabwe, which it might look like one day anyway, but at least America enjoyed 200 years in the economic and political sun under a white majority. I am not a racist, but the reality — no matter how politically incorrect — needs to be spelled out as well. (And let’s not forget that the African tribal heads were more than happy to sell their own slaves to white, black, and Arab slave dealers.)

Well, THAT clears the picture. He didn’t just thank God for White America, he outed the SJWs as hypocritical terrorists and remembered that Black Americans were originally sold into slavery by their own people. Doctor Doom bit the hand that fed him but it was likely coming anyway. Some of his economic predictions from Wikipedia:

Faber is credited for advising his clients to get out of the stock market before the October 1987 crash.

So, he did have accomplishments early in his pundit career.

In 2009, Faber predicted with 100% confidence that the Federal Reserve’s policy of keeping interest rates near zero would lead to hyperinflation approaching levels seen in Zimbabwe. Zimbabwe’s inflation rate reached 89 sextillion percent in a previous report.

It seems Faber also accurately predicted the 2010 housing bubble. What he didn’t predict was the lengths the Obama administration went to in order to prop up those insolvent banks. While the S&P 500 Index gained 50%, I worked five different jobs to put food on my table.

After those impressive banking gains during America’s Second Great Depression, these statistics have been cooked beyond all possibility of accurately measuring economic reality.

On March 27, 2013, Faber said that the U.S. is creating nowhere-to-hide bubbles in many emerging economies such as Indonesia, Philippines, and Thailand (up four times from 2009 lows).

Those banking gains had to come from somewhere. Maybe Doctor Doom was a better predictor of “economics assuming no globalist intervention”:

Gold is a famous hedge against inflation and uncertainty. Per the following website, gold stayed high in 2015 until 19 June at $1,200. It then dropped steadily and didn’t rise back above $1,100 until 10 August. It stayed above $1,100 until 5 November, when it quickly but erratically dropped to around $1,060.

Faber has been long term bearish about the American economy for a number of years, and continues to be so. He concluded his June 2008 newsletter with the following mock quote: 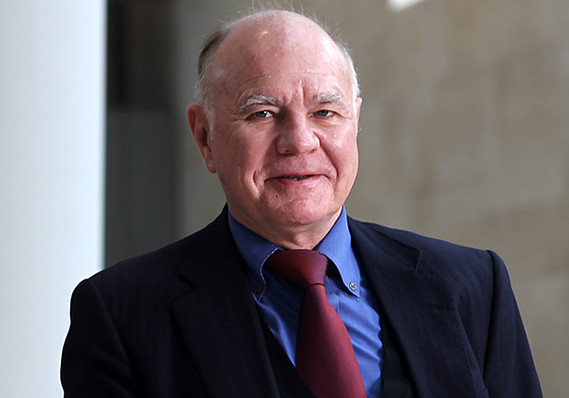 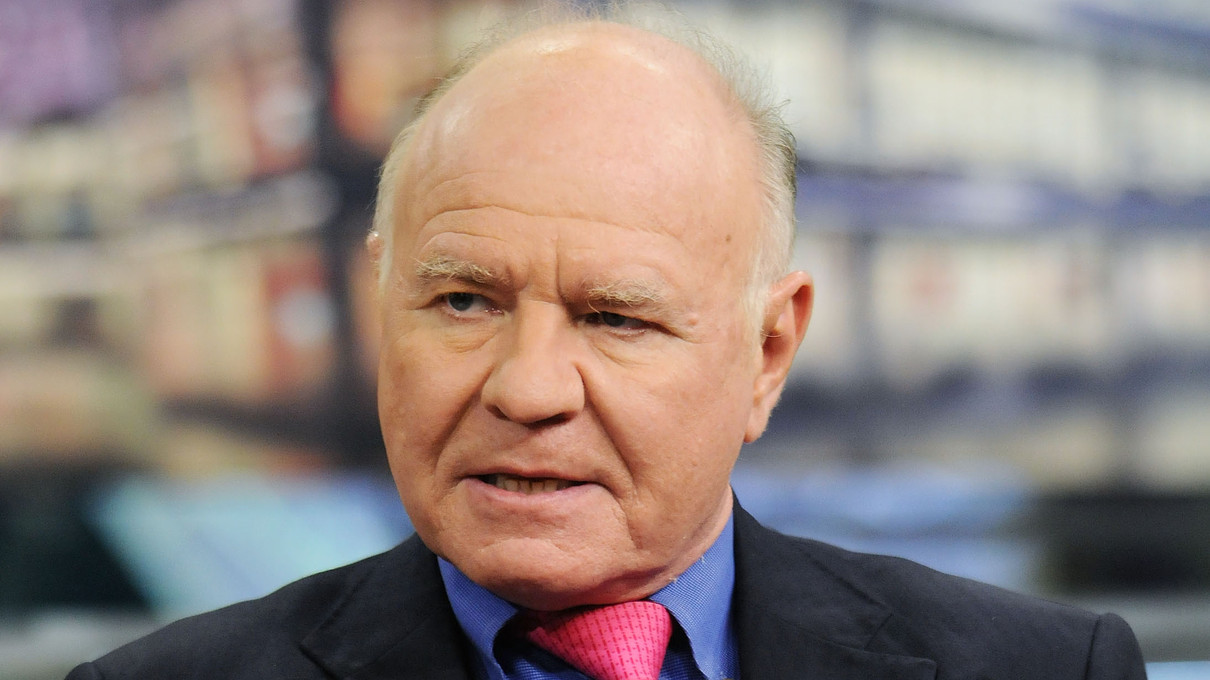 Oh, wait. Doctor Doom might not have been joking about the whores and ale. Not only is his left eye considerably more guarded than the right, look at those unequal determination lines between the eyebrow. Even his nose is unequal. When you have a face that is lopsided and not because of damage, it’s because there are two faces on the same skull. One trick to analyzing a face like this is mirroring. I began with this, the most front-facing pic I found: 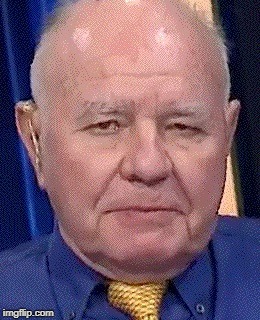 And then I copied one side of his face, flipped it and overwrote the other side of his face. My apologies for this being poor quality; Doom is not actually a fathead with respect to the outside world. 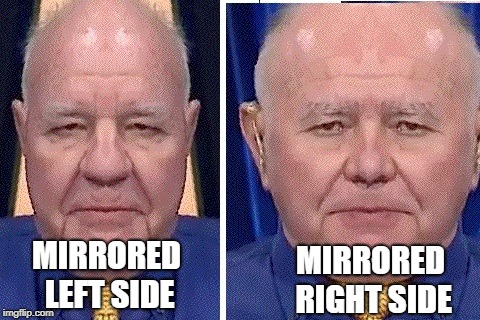 His personal life has more determination lines, thinner nostrils (less social energy), eyes practically buried behind squinty defenses and a lower corner to his mouth. His legendary pessimism comes from his personal life, not his professional life. Had his external outlook been pessimistic, he would likely not have wanted to become a talking head.

In closing, a couple awesome quotes via Fortune Magazine:

When Faber was asked about his opinions on the abilities of African Americans and their capacity to “deliver economic progress,” he simply replied, “May I suggest you travel extensively through Africa and you will find — hopefully the answer.”

When asked for comment on the Post report and the backlash over his comments, Faber told Fortune that, “If this is the only sin I committed in my life I would feel like a saint.”