MASCULINE FACES SEEN AS MORE COMPETENT THAN FEMALE ONES

People with masculine faces are perceived to be more competent than those with feminine features, which could adversely affect our choice of world leaders, according to a new study.

“Our” choice of world leaders, how optimistic. If the selection process ain’t nepotism & cronyism then it’s “Vote for Freebie” democracy.

Published in the journal Psychological Science, the study examined the “visual ingredients” of a person’s appearance that could convince others of their capability to be efficient and/or successful.

Locked behind a paywall, sadly.

Researchers at Princeton University used data from previous studies, where participants had rated a variety of different faces on how competent they thought the person was based on appearance alone.

By presenting these same faces to 33 volunteers as part of a new online experiment, and asking them to identify them as either male or female, the study’s authors identified a clear gender bias: people rated the more competent faces as male and the less competent ones as female.

They also found that the competent faces were generally perceived as being more confident and “masculine”.

This is going to sound awkward: I wish the book came with pictures so I could understand it. I’ll make a wild guess instead, that competence looks like Han Solo smirking.

In a second experiment, the researchers manipulated photorealistic images of male and female faces so that they appeared more masculine and asked 250 online volunteers to rate how competent they thought these people might be based on appearance.

Now a masculine appearance, we know what that is thanks to sexual dimorphism. AKA heteronormative biology.

It transpired that the most masculine faces were also viewed as the most competent.

The study’s authors have said the findings are significant because they reveal how gender bias may cloud our judgement when it comes to choosing world leaders.

A more competent female than this author would wonder why “masculine” is instinctively correlated with “competent”. Genetics? Experience? Both? But instead, penis envy strikes again. “Why do only boys get to look competent?” 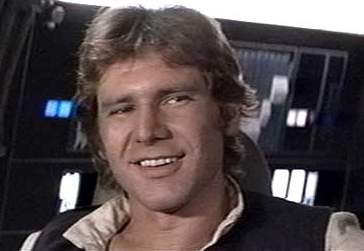