Two articles today, both illustrating how the world’s religions, and Christianity in particular, have been reduced to intercompatible, UN-recognized, faith-based NGOs. While these articles are from a Catholic perspective, the Protestant Church is also wholly invested in environmental activism. I remember driving past a local Lutheran church a couple years after giving up on it. There was a sign about the kids planting Earth Gardens to learn about caring for the environment.

God does not care about the environment. He has described, in graphic detail no less, how He will destroy it all. And why not? This reality is the diaper of our spiritual infancy. We aren’t going to live here forever and God did not exhaust His imagination with the creation of Earth. It was one week of effort, as He described it.

The Christian concern is for the souls of our fellow people. Environmental issues, the ones that aren’t crypto-globalist wealth redistribution conspiracies, are important only to the degree that they impact the welfare of humanity. If flattening the rain forest is the price of cheap food then God’s Will is for us to flatten the rain forest. Goodbye, three-spotted arroyo smelt fairy frogs! Science never knew ye.

Religious Leaders in Colombia Unite for ‘Prophetic Task’ of Environmentalism 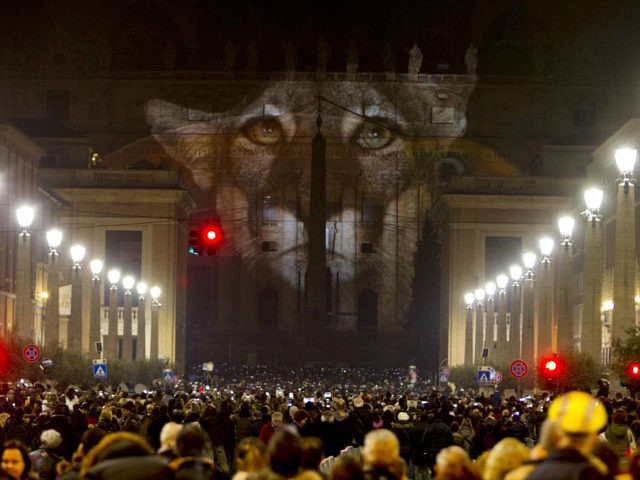 This photo is from the linked article. 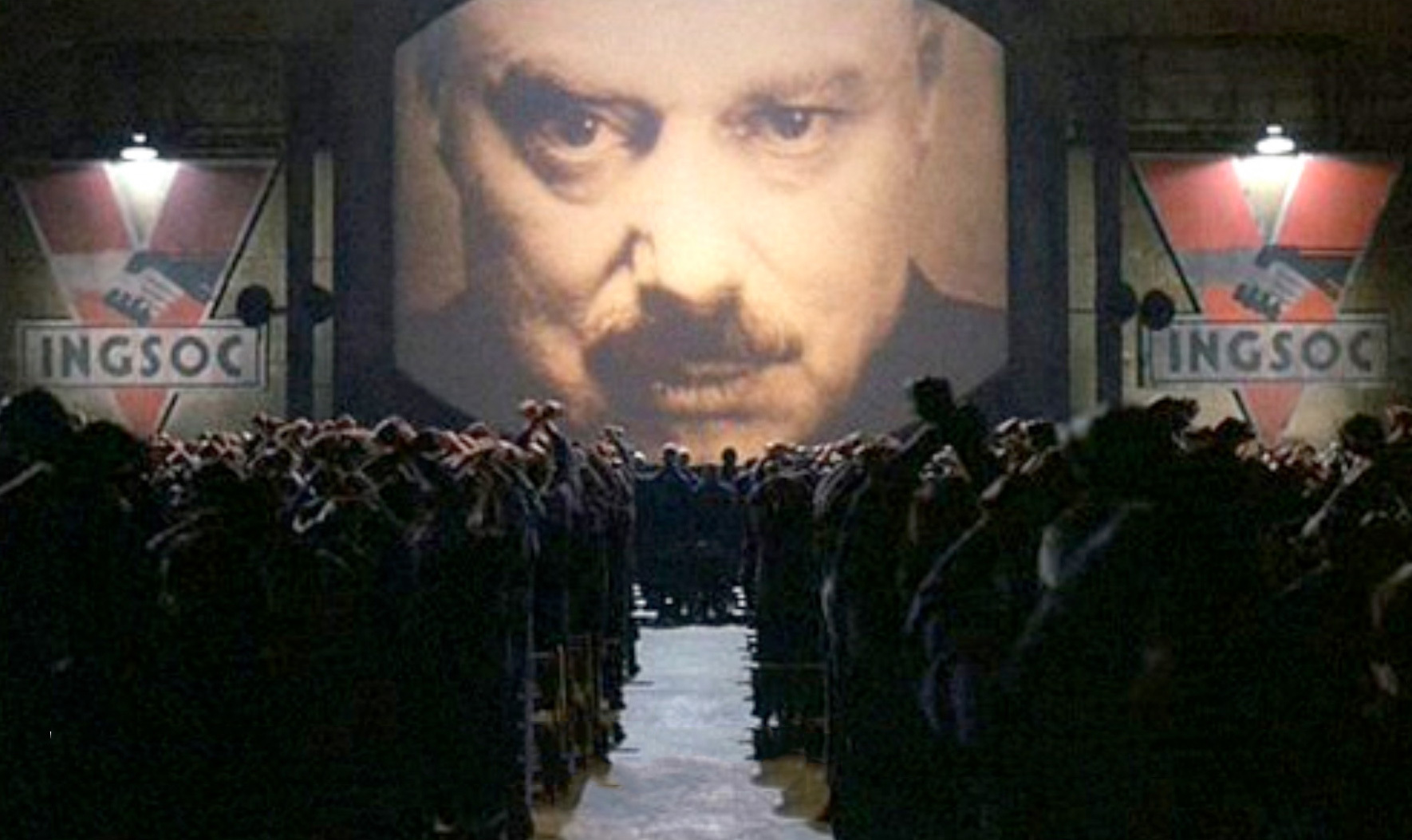 This photo could have been.

A group of leaders from different religious traditions in Colombia have united in a common quest to protect the tropical rain forests and the land rights of indigenous peoples.
Last week, Catholic, Anglican, Buddhist, and evangelical leaders, along with scientists and indigenous people, met for three days at the Jesuit-run Pontifical Xaveriana University and inaugurated a coalition known as the “Interfaith Rainforest Initiative.”

In a joint declaration at the end of the conference, the faith leaders embraced “the sacred task of curbing the environmental impact of climate change” especially as it affects the deforestation of tropical rainforests.

The article has a link to the published document but I can’t read Spanish.

This task “unites us with a concern and a commitment that transcends the frontiers of our religions and spirituality,” the declaration states.

Full stop. CHRISTIANS are saying that protecting the environment is more important that worshiping the correct deity? “I personally don’t think you should be sacrificing chickens to Baphomet but we’ll overlook that and coexist if you make a financial contribution to the world government in the name of Rainforest Biodiversity.”

This is exactly the paganism of the Roman Empire. You can worship any deity you want so long as you also worship Caesar.

“We believe that one of the most urgent issues in our country today is the protection of tropical forests and all those who have been born and grown up in them and continue to form part of the equilibrium of their ecosystem,” the signers stated.

The “prophetic task” of caring for creation, its flora, fauna, and its natural riches “is part of a global effort that is being developed with the support of U.N. Environment Programme and international cooperation,” the statement reads. 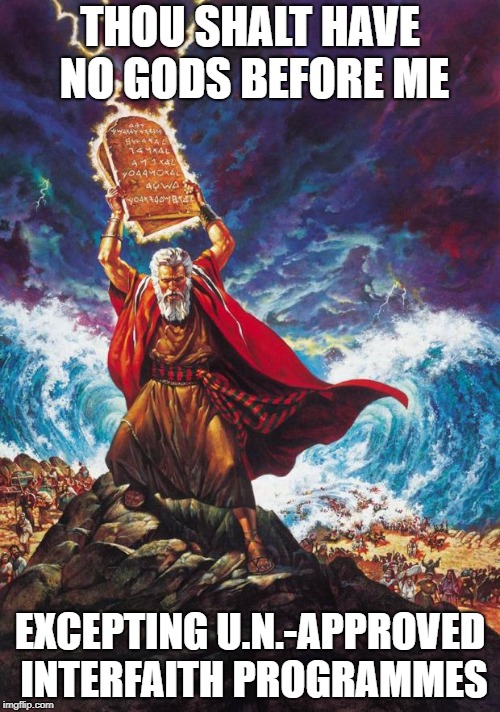 The leaders of the different faith traditions said they had been inspired by the 2015 encyclical letter Laudato Si, written by Pope Francis on the care of the environment.

“The earth, our home, is beginning to look more and more like an immense pile of filth,” the pope wrote. “In many parts of the planet, the elderly lament that once beautiful landscapes are now covered with rubbish.”

In that text, Francis also decried new environmental “sins” by which man disrespects nature, such as the destruction of “the biological diversity of God’s creation,” the degradation of “the integrity of the earth by causing changes in its climate,” as well as “stripping the earth of its natural forests or destroying its wetlands.”

I won’t say all Popes are antichrists but I will say this one is. His speeches are globalist talking points, when he isn’t ordering his own bishops to stop investigating child molestation accusations against clergy. That was the USCCB in a recent Baltimore meeting.

Per Scripture, the only sin that is against our selves is sexual sin. Frankie Boy might think about that the next time he announces a press conference to dialogue about how he is deeply, deeply thinking about being concerned for the people who are noticing all the clerical bugmen in the system.

In their declaration, the religious leaders assembled in Colombia said that faith traditions have much to contribute toward the care of the environment.

“We need to add a moral, ethical and spiritual dimension to the defense of tropical rain forests,” the statement reads. “And we need to spread that message among members of our religions and spiritual groups.”

“We are losing topical forests at a speed that has no precedent,” said Juan Bello, Colombia director for U.N. Environment. “We need new kinds of leaders who complement the work that governments and NGOs are already doing to prevent deforestation.”

A regional UN director is the spokesman for churches? China isn’t the only government trying to write “the State is you new god” into the holy texts.

In response to global warming, the idea of personal sacrifice resurfaces

He’s talking about our leaders making personal sacrifices, right? The people who want to save the rainforests are the ones who will be forced to give up their homes to live in recyclable cardboard housing at 1400 calories a day, right?

WASHINGTON, D.C. – A major scientific report by 13 federal agencies that concludes that climate change poses dire economic consequences to the United States and already is affecting the well being of people serves as a warning that demands action to protect the earth, Catholics working on environmental concerns said.

Personal response can encompass the simple or the complex, but some action is required of everyone if the consequences foreseen in the 1,656-page report are to be avoided, they told Catholic News Service.

You can be sure that every one of those 1,656 pages predicting the near future’s drastic, life-ending weather changes are completely without error… because the government said so? The same government that assured us in the ’90s that banning chlorofluorocarbons from our hair spray would be sufficient to prevent this? I want my CFCs back… AND my DDT, the only good thing we ever sent to Africa.

“We really have to wake up and get serious about tackling this issue, particularly reducing our energy consumption and reducing greenhouse gas emissions,” said Dan Misleh, executive director of the Catholic Climate Covenant. “We need to realize if we don’t get really serious about this soon our children and grandchildren will seriously suffer.”

Yes, let the living today suffer on behalf of a vaguely defined future people. Question: If  I refuse to have kids then do I get to enjoy all the benefits of all the suffering of my ancestors? Because your system is currently arranged to make ME suffer for YOUR kids.

The congressionally mandated Fourth National Climate Assessment, released Nov. 23 by the White House, projects that climate change will cost the country hundreds of billions of dollars a year by 2090. It points to worsening health, reduced farm production, stressed natural areas, lost work and classroom hours, and widespread destruction of coastal and inland property if carbon emissions are not reined in.

Dude, they’re called seasons. Winter rain cost my company two days of reduced productivity just this past week. It was not a disaster. Frankly, a little relief in the workload was welcomed. And I saved ten bucks on a car wash.

Do you know what else causes billions of dollars of lost productivity, stresses natural areas and reduces work & classroom hours? VACATIONS!

Elderly and poor people, children and minority communities are the most vulnerable, said the report, which was developed by more than 200 scientists and environmental experts from the U.S., Canadian and Mexican governments, national laboratories, universities, research institutions and the private sector.

If we eliminate the old… and young… and every minority… then we get… middle-aged white men, who by decree of the chilamony courts are never poor. Were 200 experts from a continent’s worth of governments, national laboratories, universities and research institutions truly needed to reach this conclusion? Don’t lie about the private sector being a willing participant in this. They’re the only people who know that the real causes of lost productivity and resources are… the existence of governments, national laboratories, universities and research institutions.

President Donald Trump dismissed the assessment, saying simply, “No, no, I don’t believe it,” in response to a reporter’s question about the projected economic impact of global warming. He claimed Nov. 26, without citing evidence, the U.S. air and water are “the cleanest we’ve ever been and that’s very important to me.”

Trump’s dismissive attitude is a legit example of heroic leadership in Current Year. The bar should not be that low but it is.

Trump’s response falls in line with a series of policy changes during his administration. New regulations and laws in at least 49 areas related to the environment – from vehicle mileage standards to emissions from coal-fired power plants – have been enacted or proposed since 2017, according to Harvard Law School’s Environmental Regulation Rollback Tracker.

They might as well shed that skin suit of “this isn’t about totalitarian redistributionist socialism”. It’s been stinking of rot for a long time.

“Earth’s climate is now changing faster than at any point in the history of modern civilization, primarily as a result of human activities,” the report said. “The impacts of global climate change are already being felt in the United States and are projected to intensify in the future – but the severity of future impacts will depend largely on actions taken to reduce greenhouse gas emissions and to adapt to the changes that will occur.”

This means that for the good of humanity, either Al “An Inconvenient Truth: I Invented the Internet” Gore will be forced to give up his three private jets and four mansions, or I’ll be forced out of my tiny apartment to live in a van by the river. Note: Al Gore’s 200 friends wrote this.

The U.S. Conference of Catholic Bishops acknowledged the challenges posed by climate change in a 2001 statement, “Global Climate Change: A Plea for Dialogue Prudence and the Common Good.”

The statement noted that climate change “is not about economic theory or political platforms, nor about partisan advantage or interest group pressures,” but rather “about the future of God’s creation and the one human family … about the human stewardship of God’s creation and our responsibility to those who come after us.”

Dude, seriously. That rotting skin suit of yours makes my eyes bleed. Throw it out already.

“We are brother and sister to one another. In that context, don’t you sacrifice for the one you love, especially if the one you love is hurting? That means we have to live differently. We have to do a radical shift,” Lasky said. [Father Michael Lasky, a Conventual Franciscan who serves as director of Justice, Peace and Care for Creation Ministry for the order’s Our Lady of Angels Province based in Ellicott City, Maryland.]

Apparently not, Father. Apparently, I sacrifice YOU for the one I love, which might be my pet crested gecko from New Caledonia. Because its homeland is endangered by the unprecedented amount of hot air being released from your hometown’s think tanks on the far side of the planet.

Don’t worry, our trashing your home and job and life will be nothing personal even though you’re an Evil Man for what you’re unknowingly doing to the environment.

8 thoughts on “Environmentalists Unify the Church”