Contra all the headlines flying around, I’m not convinced the FBI has categorized the Proud Boy organization as an extremist group. All the journalists are claiming that based on a leaked memo from the Clark County, Washington Sheriff’s Office. I looked on the FBI webpage and the search function turned up no results for Proud Boys at all. Very curious… but I am speaking of the journalists’ overreaction to this not-confirmed news. The FBI willingly admitted to classifying the Black Identity Movement as extremist last year so they aren’t necessarily the SPLC’s toady.

So why is a country sheriff breaking this story and why is the lamestream media latching on so quickly to the notion that Proud Boys have been denounced by the FBI?

Ah… the Proud Boys allowed girls into their clubhouse.

Most commonly seen scrapping in the streets with Antifa, the Proud Boys have now been designated as an “extremist group with ties to white nationalism” by the FBI.
According to a document from the Clark County Sheriff’s Office in Washington state, the FBI has labeled the Proud Boys an extremist group, and “warned local law enforcement agencies that the Proud Boys are actively recruiting in the Pacific northwest.”

“Proud Boys members have contributed to the recent escalation of violence at political rallies held on college campuses, and in cities like Charlottesville, Virginia, Portland, Oregon, and Seattle, Washington,” the report continued.

The report stemmed not from an investigation into the Proud Boys themselves, but from the association between a female Clark County deputy and the group, which was found to violate sheriff’s office policy. Antifa groups had circulated a picture of the deputy in a Proud Boys sweater, and threatened to reveal her personal details.

Looks like New York Antifa are sore losers. They went hunting for a weak link and found one. Here’s a better picture of Erin Wiley: 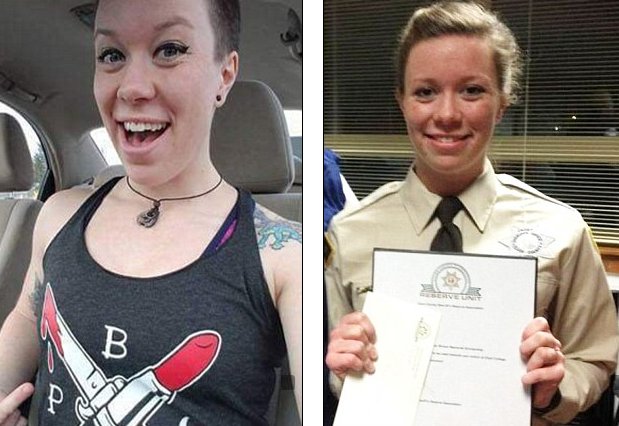 Thousand cock stare. We don’t have to feel bad about her being fired from the Sheriff’s office. Hmm, she has hair in the right photo. That may have been a picture from her cadet days.

The FBI told The Guardian that it would not “directly address the designation,” adding that it “regularly assesses intelligence regarding possible threats” from a multitude of groups. Proud Boys founder Gavin McInnes told the Gateway Pundit that he thinks “it’s just local cops trying to cover their asses if she sues” for being unfairly disciplined.

A fraternal organization, the Proud Boys was founded in 2016 by McInnes. Soon after, its uniform of a black and yellow Fred Perry polo shirt began showing up at protests and rallies across the country, including the deadly Unite the Right rally in Charlottesville, Virginia, last August.

Excellent reporting by rt.com! And what they found is the FBI did NOT state the Proud Boys were an extremist group even when asked.

So, what happened? Who’s the broad? Let’s look at the leaked internal memorandum linked to in the article. The memo is dated 10 August 2018, before any of the Proud Boy shenanigans in NYC. And it’s only breaking now that the PBs are allegedly extremists per the FBI?

Probationary Deputy Erin Wiley was fired for her off-duty conduct, to wit: associating with a Proud Boy without disclosing it on official documents between 2017-2018. She was accused of… designing and selling women’s apparel for them. The “Proud Boys’ Girls” line of clothing.

Not a good look for a “fraternal organization”.

The Columbian Newspaper learned of Erin’s Proud Boys and Proud Boy Girls affiliation and contacted the Sheriff’s Office. The Columbian submitted on July 2, 2018, a formal public disclosure request for Erin Willey’s employment information and anything the Sheriff’s Office had related to the Proud Boys. In the process of responding to the Columbian’s public disclosure request, Undersheriff Mike Cooke learned that the newspaper staff had received from a source, a side by side photo of Erin wearing Proud Boy Girls apparel and also a photo of her wearing a patrol uniform.

This investigation later determined that Erin’s Graham Jorgensen was the likely source of the Columbian’s photo and that he sent this photo as a form of retaliation, because Erin ended their relationship.

Dayumn. We know who the bitch was in THAT relationship. Erin’s boyfriend sent her pictures to a newspaper to get her fired, and the Sheriff’s office was so excited at the prospect that they accused the entire organization.

But… perhaps not without cause. Poking around, I discovered Jorgensen had an arrest for domestic violence/stalking in May. That was probably Erin.

The information provided by this analysis is not meant to outline every detail known about Erin Willey’s private or professional life. This review will not explore Erin’s political, personal beliefs.

That makes this memo very not-authoritative when it claims the FBI has imposed an extremist designation.

The photograph appears to show Erin Wiley posing for a selfie style picture wearing a black hoody style sweatshirt with a Proud Boy Girls logo. The Proud Boy Girls logo is a lipstick and a switch blade knife crossing each other to form an X. There is blood dripping off of the knife. The symbol has been interpreted by activists on both sides as a way for an individual or group to communicate their solidarity with the League of the South (LOS). a far right southern nationalist group.

Man, that’s weak. Crossed ‘whatevers’ is an incredibly common design. Although the bloody knife is not good for her in any context. Here’s the LOS symbol:

Crossed just-about-anything could resemble that. Including, apparently, lipstick.

At this time we do not know if the Proud Boy Girls intended their logo to form an as a means of showing that solidarity with the LOS, or if it was just a coincidence. There are also the letters PBG representing Proud Boy Girls. And Finally the logo contains a picture of what is generally viewed as a cartoon style heart.

For shame. The author is trying to kiss up to the SPLC, or somebody. The memo goes on but it’s only relevant to Erin’s employment situation.

Every time the memo mentions the FBI, it mentions the SPLC. Vancouver/Clark County being next door to Portland, I think this is simply an Antifa point-and-shriek that took off. I can believe the FBI would put the Proud Boys on an “extremist” list but only when the FBI actually says so.

As weak as this citation of FBI behavior is, it was sufficient to convince Gavin McInnes, founder of Proud Boys, to shed his skin and slither away.

In his final appearance as the group’s public face, McInnes argued that he “was never the leader, only the founder” and that the term “stepping down” cannot apply to him.

Bullshit. He was its spokesman, its public face.

Regarding his motivations for ditching the group, McInnes said that he was told by his lawyers that him disowning the group could help “alleviate sentencing” for nine members of the group who were arrested by the NYPD following a brawl with Antifa in October. The clash erupted outside the NYC Republican headquarters with both sides engaging in acts of violence. Three left-wing activists were subsequently arrested on misdemeanor assault charges.

Not credible. The court would consider McInnes a third party whose post-arrest conduct was irrelevant to the case in question. Besides, they’re likely to go free because they were charged with headline-grabbing “rioting” instead of simple assault. For more, I covered that incident on my blog:

McInnes said that, while he was following the lawyers’ advice, he was doing “all of this reluctantly,” blaming “terrible journalism, rumors and lies” for penetrating the court system and demonizing the group.

Bullshit he’s doing this reluctantly. How could he attend the political rallies he did without expecting “terrible journalism, rumors and lies” to try a few hatchet jobs at his expense? Refusing to stand his ground on this, and trying to whitewash the surrender with “it’ll help our guys in jail” lying is going to burn his reputation more completely than anything Antifa could have done. Similarly, I think McInnes now has more to fear from the guys with “Proud Boy” tattoos than the feminazi footsoldiers.

Couldn’t happen to a more deserving “leader”. I suppose the Proud Boys will now fall apart, their reputation tarnished by some aggressive thugs and their leader hitting the fire escape at the first hint of a Federal case against him.

3 thoughts on “Proud Boys Not Extremists per FBI”