China has come out with a new State TV news anchor, an artificial intelligence based on a real guy. Who can pass up the chance to read the face of a computer? Of course, the computer’s image is whatever it’s programmed to be but we can see what Party official think makes a good news anchor. Usual disclaimer for me reading a non-white face.

For example, I was expecting a female. It makes good sense to automate a female talking head, as there’s no loss of IQ, the boobs always stay perky, you don’t have to pay her and the network can sell royalty-free “action figures”. The selection of a man is a good traditional/patriarchal indicator, or rather, the PRC Party has yet to embrace feminism at the upper levels. 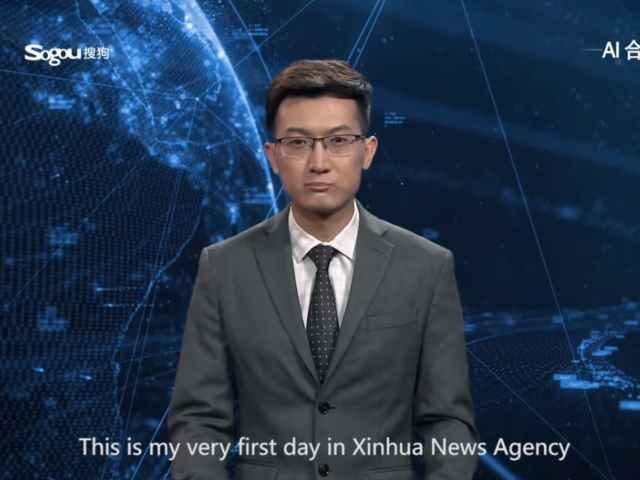 “Hello everyone. I’m an English artificial intelligence anchor. This is my very first day in Xinhua News Agency. My voice and appearance are modelled on Zhang Zhao, a real anchor with Xinhua,” declared the A.I. anchor in a video released by Xinhua. “The development of the media industry calls for continuous innovation and deep integration with the international advanced technologies. I will work tirelessly to keep you informed as texts will be typed into my system uninterrupted. I look forward to bringing you the brand new news experiences.”

The face shape–broad head and cheeks, narrow chin–has a number of names but is associated with loyalty and success in business. The middle third of his face is prominent, indicating ambition and status. (This mainly achieved by his haircut.) I’ve heard this face shape is highly prized in Chinese culture.

The eyes have the drooping canthus (hard to see in this pic) that indicates good observation skills and is generally highly valued in Chinese physiognomy, being more concerned with success in life than personality traits. Dramatic eyebrows give the viewer an impression of confidence. Chin and eyeglasses are fairly neutral. Because eyeglasses aren’t needed on an AI construct, they were probably added to give an impression of intelligence. Intelligence is correlated with near-sightedness; this is often exaggerated in media to the point of super-genius being demonstrated with the proverbial coke-bottle glasses.

Nose is straight and thin, which denotes interest in logic and technical subjects over people, which is not a nose one would expect a journalist to have. But the nostrils aren’t pinched so he’s not avoidant to people, either.

I was expecting the ears to have larger earlobes, which is associated with wealth in Chinese physiognomy because wealth was originally displayed with earrings. (This is why stereotypical Buddha’s ears have earlobes so large, they sometimes resemble bananas.) So, the designers probably wanted to give the impression of modest economic means. The rounded shoulders bulked up by a good suit would confirm that, I think.

The designers included the habit of most people to be more guarded in expression on the right (external) side of the face than the left (internal). The pull of the lips to the right is regularly associated with this.

Overall, Robo-Xinhuan is an ambitious, reliable salaryman who hasn’t quite attained his predicted level of success.