Yet another of America’s leaders chooses to erase the South’s legacy because dem Evil Southerners were black-hearted slavers! 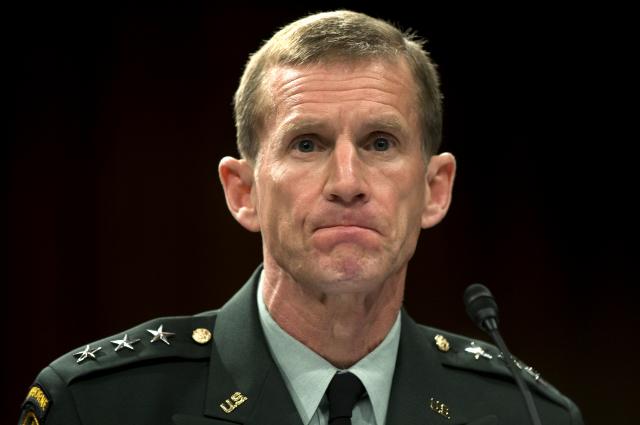 McChrystal’s physiognomy is what one would expect of a military commander. Aggression and concentration lines all over the forehead, small upper eyelids combined with flat lower eyelids for a very rational/impersonal perspective, expressionless low eyebrows that follow face contours, face is weathered and bony in place of the bloated indolence of too many Americans these days. Good jawline. His ears break the mold; those Dumbo-sized models indicate extreme nonconformity. Indeed, McChrystal had a reputation for speaking his mind. It got him both promoted and fired, as unpolished truths are wont to cause. I could trust a face like that to lead me in combat.

Alas, he threw that trust away along with his West Point keepsake, a picture of Robert E. Lee gifted to him by his young wife, because he’s newly ashamed that Lee “fought for slavery”. Perhaps he’s spent too much of retirement hanging around the Ivy Leagues; bad company corrupts good character, after all, and the mind goes soft with age.

Anyway, here’s McChrystal spouting the Leftoid party line in his own words:

At 63, I Threw Away My Prized Portrait of Robert E. Lee

I was raised to venerate Lee the principled patriot—but I want no association with Lee the defender of slavery.

by Stanley A. McChrystal

On a Sunday morning in 2017 I took down his picture, and by afternoon it was in the alley with other rubbish awaiting transport to the local landfill for final burial. Hardly a hero’s end.

The painting had no monetary value; it was really just a print of an original overlaid with brushstrokes to appear authentic. But 40 years earlier it had been a gift from a young Army wife to her lieutenant husband when the $25 price (framed) required juggling other needs in our budget.

The dignified likeness of General Robert E. Lee in his Confederate Army uniform had been a prized possession of mine. I’d grown up not far from the Custis-Lee Mansion, and at West Point, Lee, the near-perfect cadet, Mexican War hero, academy superintendent, and, finally, the commander of the Confederacy’s Army of Northern Virginia, cast a long, ever-present shadow. Later, in Army quarters from Fort Benning, Georgia, to Fort Lewis, Washington, the painting reflected my fascination with leadership, and it spoke of duty and selfless service.

…A mythology grew around Lee and the cause he served. For many, Lee’s qualities and accomplishments, already impressive, gained godlike proportions. This was the Lee I first came to know: a leader whose flaws and failures were sanded off, the very human figure recast as a two-dimensional hero whose shadow had eclipsed the man from whom it came.

But as time passed, the myth was reexamined. The darker side of Lee’s legacy, and the picture in my office, now communicated ideas about race and equality with which I sought no association. Down it came.

Bookmark that. You’ll see it again, at the end.

At age 63, the same age at which Lee died, I concluded I was wrong—to some extent wrong about Lee as a leader, but certainly about the message that Lee as a symbol conveyed. And although I was slow to appreciate it, a significant part of American society, many still impacted by the legacy of slavery, had felt it all along.

That’s a lie. Nobody is still impacted by the “legacy of slavery”. It’s been 150 years; everybody who wants to let the past die already has. Everybody who doesn’t is a grievance-mongering parasite.

Most accounts of Lee as a man, and a leader—his physical presence, demeanor, valor, and apparent serenity—reflect almost quintessentially desirable leadership traits. But staring into a bright light makes it hard to see clearly. More than most, Lee is portrayed either in a glare of adulation or, more recently, under a dark cloud of disdain.

At West Point, Lee and the other Southern heroes became icons whom other cadets and I instinctively sought to emulate. In a painful contradiction, they also betrayed the oath we shared, took up arms against their nation, and fought to kill former comrades—all in the defense of a cause committed to the morally indefensible maintenance of slavery.

Another lie, which McChrystal will disprove himself later on. Lee left the USA military honorably as his competing loyalties were forced into confrontation. He changed uniforms with honor and for as long as he wore any particular uniform, he did right by it. Anybody who wants to claim Robert E. Lee was an oath-breaking traitor has a big hill of that’s bullshit to climb.

The death in 1857 of his wife’s father, George Washington Parke Custis, caused Lee to take extended leave from his unit in order to settle family affairs. That process involved more than executing Custis’s last will and testament. The slave-worked estates were poorly run and heavily in debt, and the professional soldier found himself in an active role within the landed, slave-owning gentry for which the South was known.

Lee’s own statements on slavery are conflicting, but his overall record is clear. Although he repeatedly expressed his theoretical opposition to slavery, he in fact reflected the conventional thinking of the society from which he came and actively supported the “peculiar institution” of slavery. Well before joining the Confederacy, Lee loathed abolitionists, and his feelings hardened as the Civil War dragged on.

The abolitionists wanted instant emancipation; most Southerners wanted to phase out slavery in order to prevent economic collapse. Tsar Alexander II’s disastrous emancipation of the serfs is relevant here.

From as far back as 1859, Lee’s personal treatment of slaves has been a public issue. Although accusations that he beat his slaves are impossible to prove after 150 years, their veracity is arguably beside the point. Lee was a willing and active participant in a society and economy that rested on slavery, and he fought ferociously to defend it. Lee was a Southerner, and efforts to depict him in opposition to slavery run contrary to his actions.

The veracity of accusations is NEVER beside the point and accusations that “are impossible to prove” are worthless. This kind of statement is far, far beneath a general of McChrystal’s background.

The road to America’s Civil War, and Lee’s fateful decision to join the Confederacy, was a long one. Pressure between the North and the South grew over decades, but the final straw for most in the Deep Southern states was the November 1860 election of the Republican candidate Abraham Lincoln of Illinois. For Lieutenant Colonel Robert E. Lee, then commanding the 2nd United States Cavalry Regiment at Fort Mason, Texas, the immediate challenge was to lead, and to carefully manage, a mass of officers and soldiers who were individually challenged to choose between loyalty to their state, their nation, and the new Confederacy that might arise. Outside events threatened to rupture long-held loyalties and produce an assault on the very premise upon which the United States had been created some eight decades earlier.

As I mentioned above, this is where McChrystal debunks his own accusation against Lee of oath-breaking and betrayal. Political forces beyond any one man’s control forced questions of loyalty that had not previously existed. There is no treachery in this.

As pressures mounted, Lee read Edward Everett’s The Life of George Washington as if for guidance from the nation’s first president, spending these months meditating on where his own obligations lay. Was his duty, as he had sworn, to the United States, or, more basically, to its Army? Or did he owe allegiance to older ties to his beloved Virginia and, if it should secede, to the South? For Lee, the choice could not have been entirely the product of political analysis; that’s not how he functioned. Family, friendships, and visceral ties to the land and society from which he came all entered the calculus.

The example set by Robert E. Lee has never been more important or relevant. That, I claim, is why McChrystal threw out his family heirloom. He didn’t want to be reminded of what America once was or the price that restoring America will be. Instead of following Lee’s example of taking up arms in defense of his home, Stanley McChrystal has decided to “Let the past die. Kill it if you must,” to quote a villain so lame I can’t remember his name.

From his earliest days, Lee’s conduct, his diligence, and his willing sacrifices were rooted in fulfilling responsibilities he set for himself, and in meeting the expectations of others. It was a persona he crafted carefully and projected intentionally. It was not a false depiction, but instead it was remarkably accurate in reflecting the very essence of the man. For Lee, the torture came when the institutions and values to which he felt obligations came into conflict. For the first time in his life, he could not simultaneously meet all the commitments he’d made. In simply tying his decision to the course chosen by his native Virginia, he essentially passed the most important moral decision of his life to the popular vote of others. Soon he would find himself supporting the greatest evil in American history, slavery, and not only opposing, but ultimately trying to destroy, some of the very institutions and ideas he’d held dear.

Lee tied his decision to his home and his people. Not to some poorly defined mob rule.

This isn’t about slavery or the Civil War. This is about Gen. McChrystal looking at today’s destruction of the American people, the American land, the American Church and the American way of life, and throwing out the memory of a man he once admired because he himself is now faced with the exact same decision… but unlike Lee, McChrystal has decided against protecting his people and lands.

Or as McChrystal said it, above: [the] picture in my office now communicated ideas about race and equality with which I sought no association. Down it came.

4 thoughts on “Retired Gen. Stanley McChrystal Cucks Out On America”