He’s the director of U.S. Citizenship and Immigration Services, the agency regulating lawful immigration into the USA. Among other duties, Cissna oversees the H1b “Subcomtinental Hindu Indians who can’t speak English are White Bread Americans, too” program. Not the sort of official you often see in the news and that’s theoretically a good thing; it’s the duty of bureaucrats like him to implement policy, not dictate policy.

Kudos to Cissna, he’s been implementing some Trump into the butthurt backsides of Big Tech. 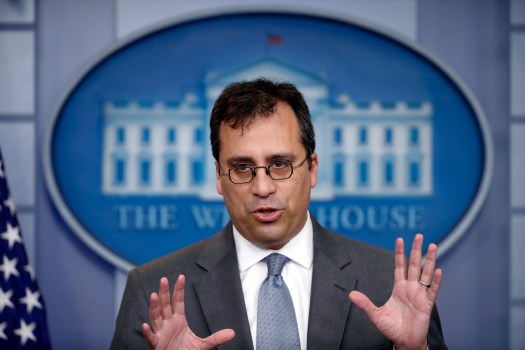 Technology executives, including Apple CEO Tim Cook and Salesforce co-CEO Marc Benioff — have urged the government to back off on tightening immigration policies for foreign workers following aggressive talk from the nation’s immigration chief.

U.S. Citizenship and Immigration director Francis Cissna, talking to a group pushing for reductions in numbers of foreign workers and immigrants, cited “all sorts of fraud and abuse” in the H-1B program that many Silicon Valley companies rely on for highly skilled workers and “across all these programs.”

The H-1B visa, intended for foreign workers doing specialized jobs has become a flashpoint in the immigration debate, with firms arguing it should be expanded beyond the annual 85,000 new visas so they can acquire the world’s top talent, and critics pointing to reported abuses and asserting the visa is used to replace Americans with cheaper, foreign workers.

The critics are right. Come on, which nation leads in top-talent tech? USA. But if you need numbers:

I don’t call Subcontinental Indians H1bbies for nothing.

Cissna said he wanted elected representatives to take action on the H-1B.

“I would really love it if Congress would just pass a one-sentence provision that would just prohibit American workers in being replaced by H-1B workers,” Cissna said in a talk last week to the Center for Immigration Studies, at the National Press Club in Washington, D.C.

People trying to “game” the immigration system is an “eternal problem” for officials, he said.

Cissna outlined actions his agency has taken — some to satisfy President Donald Trump’s call for better screening of immigrants, he said — to crack down on potential abuse of the immigration system. Citizenship and Immigration has expanded visits to sites where workers on H-1B and other visas are employed, for example “to see if the worker is really there, to see if the business really exists,” he said.

That is an abominably low standard of compliance.

The agency also changed tactics in checking up on immigrants’ claims, interviewing more people on employment-based green cards after historically focusing on those with marriage-based green cards, Cissna said.

Hmm, this is a small sample size but the thirst for foreign brides slowly dropped until Trump arrived on the political scene.

U.S. businesses employing foreign workers have been scrambling to push back against changes to U.S. immigration policy that have flowed from Trump’s April 2017 “Buy American and Hire American” executive order.

Sec. 2. Policy. It shall be the policy of the executive branch to buy American and hire American. …

(b) Hire American. In order to create higher wages and employment rates for workers in the United States, and to protect their economic interests, it shall be the policy of the executive branch to rigorously enforce and administer the laws governing entry into the United States of workers from abroad, including section 212(a)(5) of the Immigration and Nationality Act (8 U.S.C. 1182(a)(5)).

Any alien who seeks to enter the United States for the purpose of performing skilled or unskilled labor is inadmissible, unless the Secretary of Labor has determined and certified to the Secretary of State and the Attorney General that—

(I) there are not sufficient workers who are able, willing, qualified (or equally qualified in the case of an alien described in clause (ii)) and available at the time of application for a visa and admission to the United States and at the place where the alien is to perform such skilled or unskilled labor, and

(II) the employment of such alien will not adversely affect the wages and working conditions of workers in the United States similarly employed.

That explains the “jobs Americans don’t want to do” rhetoric. The betrayers can’t argue that Americans are unable or unqualified to do typical H1bbie work so they complain we aren’t willing. At their offered wages & working conditions, few people with a choice would be.

Back to the main article.

The CEOs attacked what they called “inconsistent government action and uncertainty,” saying it “undermines economic growth and American competitiveness and creates anxiety for employees who follow the law,” according to Fortune, which published a copy of the letter.

The letter also contained a warning about the administration’s proposed work prohibition for spouses of H-1B holders.

“These spouses are often highly skilled in their own rights and have built careers and lives around their ability to contribute to companies here,” the CEOs said. “Other countries allow these valuable professionals to work, so revoking their U.S. work authorization will likely cause high-skilled immigrants to take their skills to competitors outside the United States.”

Shameless lying. Men marry down, women marry up. That is normal human behavior. The corporate scientist does not fall in love with the boardroom shark.

Inconsistency on immigration policy will deter foreign citizens from attempting to move to the U.S., the CEOs wrote.

“Few will move their family and settle in a new country if, at any time and without notice, the government can force their immediate departure – often without explanation,” they said in the letter. “As the federal government undertakes its legitimate review of immigration rules, it must avoid making changes that disrupt the lives of thousands of law-abiding and skilled employees, and that inflict substantial harm on U.S. competitiveness.”

They are not supposed to settle here with their families. H1b is supposed to be a TEMPORARY work visa. Not a path to citizenship!

In his talk, Cissna suggested a more comprehensive immigration crackdown is coming.

“On the things we’re doing on H-1Bs and all that, the worker visas, we haven’t really done that much yet,” Cissna said. More investigative interviews are “almost certainly” on the horizon, he indicated.

“So you could have a person here for a dozen years and we never talk to them,” he said. “I don’t think that’s prudent.”

Hot damn, a Federal bureaucrat who cares about doing his job right. There’s going to be more of that attitude, too, as the Commiefornia Deep State intentionally runs foul of the Federal Deep State. I’m not using hyperbole when I say Sacramento & friends’ insistence on mass immigration at all costs had already led them to openly defy and sabotage Federal border control efforts, obstruct federal law enforcement from performing their primary duties and seek political and economic ties with foreign powers considered by the Federal gov’t to be urgent national security threats. That threatens the power bases of many little fiefdoms and thus far, only Trump Derangement Syndrome is preventing a massive bureaucratic backlash.