I’m a backer of the Alt-Hero: Q project of Vox Day’s. While I’ve criticized his early comic ventures for being based around Kung Fu Princesses, which is First-Wave Feminism in my book, the simple fact is there’s nobody else in today’s publishing industry that gives even a first thought to patriarchy and good storytelling, let alone relevance to current events like illegal immigration. AH:Q looks like quality and its protagonist does not have boobs so I gave it my backing.

Crowdfunding website IndieGoGo shut down Vox Day and Arkhaven Comics’ Alt-Hero: Q crowdfunding campaign. The comic book series which is being written by Chuck Dixon with art by Hélix Haze and colors by Arklight Studios had trended #1 on the site when it first launched.

While the main IndieGoGo page has been suspended, backers for the project also received emails indicating the campaign had been shut down and transactions had been refunded, and once again stated the campaign didn’t comply with IndieGoGo’s Terms of Use.

I have trouble believing that this was not IndieGoGo’s plan from the moment they heard Vox Day was associated with the project but this is plausible:

The termination of the campaign comes after Bleeding Cool ran an interview with Vox Day. In a livestream, Vox Day believes Bleeding Cool readers lobbied IndieGoGo to get the Alt-Hero: Q book pulled from IndieGoGo.

“We’ve got everyone’s email addresses and so forth, so if we have to set up our own crowdfunding platform, we will do so. However, in light of the fact that Indiegogo has done this retroactively, we are already looking into the legal aspects of their actions. I am not yet aware of any reason, in fact, I do not even know if the scheduled payment for the campaign was delivered on schedule or not two weeks ago. I assume not, but I won’t be able to confirm that until tomorrow.”

Vox also indicates he’s spoken with a lawyer and is likely to take action against IndieGoGo.

“I’ve already talked to The Perfect Aryan Male, the architect of our lawsuit against GT Interactive. Suffice it to say that the band is back together!”

“Looking into legal redress. If we have a good case, we will pursue it.”

Unlike Leftoids, I know VD isn’t joking when he says that. Watching the SJWs go after him is like watching a self-cleaning mousetrap. They accuse him of being a cruel, cold-hearted sadist who won’t play fair with them and every time he proves them right, they double down as if success will scare him back onto the plantation that they kicked him off of a decade ago. Yo, you Sick Joke Wankers, why don’t you quit while you’re still behind? *GQ munches popcorn as another wave REEEs into the mousetrap* 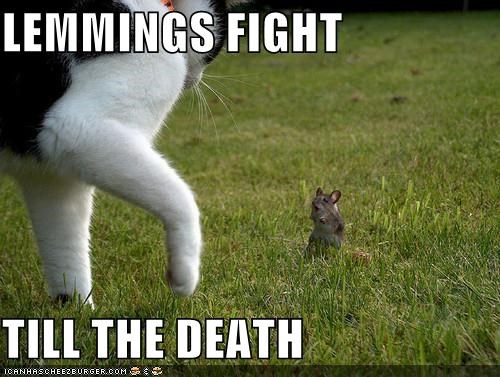 As soon as VD connects with me on the next wave of crowdfunding, I’ll be upping my commitment by tapping my entertainment budget. The ride never stops and in this circus, the show isn’t started until the fat lady sings.