Stay away from the Reddits or you’ll find stuff like this: 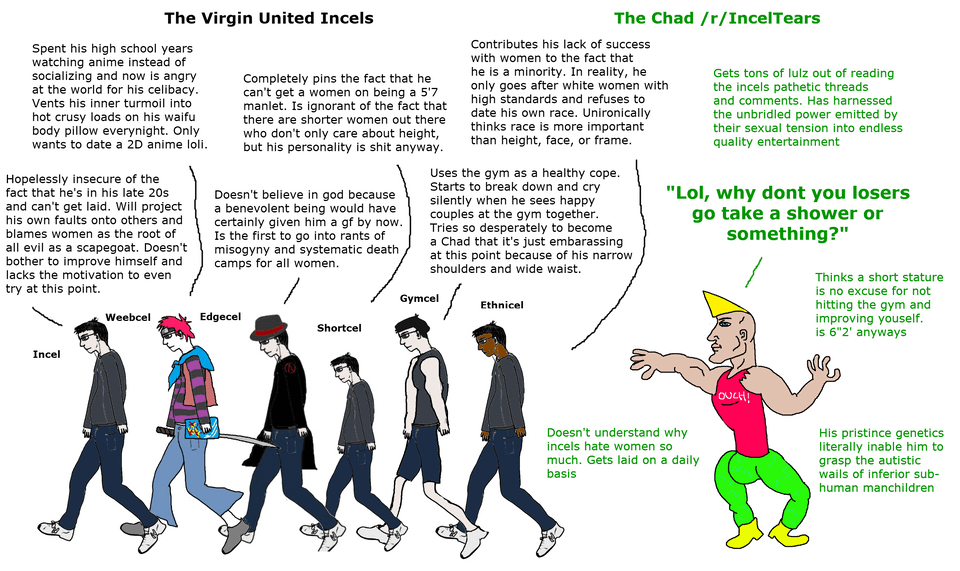 Pic credited to RampageRiley98 in April 2018. One thing I envy the Left for is their opportunity to live exclusively among like-minded people, where members can be honest with their beliefs and need not routinely listen to their enemies explaining what all is perceived wrong with them. I don’t embrace Leftism to get that because the cost would be my soul, my freedom, my emotional stability and Newton’s Third Law.

Similarly, the ‘problem’ with incels is not that they cannot get sex. It’s that the price of sex, either in dollars or opportunity costs or mental health, is too high. But regardless, let’s see what truth there is in RampageRiley’s Incel profiles:

Hopelessly insecure of the fact that he’s in his late 20s and can’t get laid. Will project his own faults onto others and blames women as the root of all evil as a scapegoat. Doesn’t bother to improve himself and lacks the motivation to even try at this point.

Don’t be too quick to blame the incel for having faults. The demands never stop and the rewards never come. Guys who reach the point of realizing that work ethic & emotional stability are the reasons they’re sexless are in a bad place. Were they motivated to fix these problems, chicks would be lining up at their Death Row prison cell. But no, they’re emotionally stable.

Society is stupid to punish the men who do right.

Doesn’t believe in God because a benevolent being would have certainly given him a gf by now. Is the first to go into rants of misogyny and systematic death camps for all women.

This one made me angry. Yes, there’s a type of incel who ended up that way because he trusted God as represented by the Churchians. The punishment for these false priests cannot be too harsh.

Completely pins the fact that he can’t get a woman on being a 5’7″ manlet. Is ignorant of the fact that there are shorter women out there who don’t only care about height but his personality is shit anyway.

This is a thing. It annoys me because I’m 6’3″ and a total zero with women. I think that was mainly because social media first became a thing for my generation and I was never on social media.

In hindsight, the red flag was young women adopting smartphones faster than nerds.

Uses the gym as a healthy cope. Starts to break down and cry silently when he sees happy couples at the gym together. Tries so desperately to become a Chad that it’s just embarrassing at this point because of his narrow shoulders and wide waist.

Why is a guy like this being mocked? It says much about society’s attitude towards unsexy men that a guy who tries & fails is lumped together with those who don’t try at all.

[Attributes] his lack of success with women to the fact that he is a minority. In reality, he only goes after white women with high standards and refuses to date his own race. Unironically thinks race is more important than height, face or frame.

Race ought to be more important. Mudsharking women cause nothing but trouble.

The ethnicel sounds like an American Hindu specifically. While I despise their trespassing in North America, India isn’t nicknamed “Cuckistan” for no reason. No surprise that a Hindu would accept even a bitchy fat white skank over the literal ball-busters of the Ganges.

Gets tons of lulz out of reading the incels pathetic threads and comments. Has harnesses the unbridled power emitted by their sexual tension into endless quality entertainment.

The men who enjoy schadenfreude like this are the kind of men who try to forget their own misery by wallowing in the misery of others. Not the guys busy enjoying women.

His pristine genetics [prevent him from grasping] the autistic wails of inferior subhuman manchildren.

This one’s hilarious. Women instinctively breed with only the genetic best of men because otherwise, evolution wouldn’t be true. And we know evolution is true! Therefore, we should allow ourselves to be cuckolded by sociopaths and cruelty artists for the genetic good of humanity because chicks dig jerks.

In conclusion, nothing to see here. Incels are still hated for being unsexy by bitter men who got married thinking marriage meant wifey wanted to touch his body. The Chads themselves are oblivious to this noise, only asking themselves “who do I fuck next?” and “why does it hurt to pee?”

It hurts because unlike the incel, Chad paid the price for getting laid.