LONG BEACH (AP) — California State University, Long Beach, will move its half-century-old “Prospector Pete” statue away from a prominent place on campus because of the impact the 1849 gold rush had on indigenous people.

A new record! We couldn’t go one paragraph into this Leftoidism without encountering rank hypocrisy. Why was the 1849 gold rush bad for the indigenous people? IMMIGRATION! MASS IMMI-FUCKING-GRATION!

Following the Treaty of Guadalupe Hidalgo (February 2, 1848) that ended the war, the westernmost portion of the old Mexican territory of Alta California soon became the American state of California, and the remainder of the old territory was then subdivided into the new American Territories of Arizona, Nevada, Colorado and Utah. The lightly populated and arid lower region of old Baja California remained as a part of Mexico. In 1846, the total settler population of the western part of the old Alta California had been estimated to be no more than 8,000, plus about 100,000 Native Americans, down from about 300,000 before Hispanic settlement in 1769.

Is this why liberals love Mexican immigrants, because the Mexicans were genociding the locals before whites got the chance? More:

In 1848, only one week before the official American annexation of the area, gold was discovered in California, this being an event which was to forever alter both the state’s demographics and its finances. Soon afterward, a massive influx of immigration into the area resulted, as prospectors and miners arrived by the thousands. The population burgeoned with United States citizens, Europeans, Chinese and other immigrants during the great California Gold Rush. By the time of California’s application to the US Congress for statehood in 1850, the settler population of California had multiplied to 100,000. By 1854, over 300,000 settlers had come. Between 1847 and 1870, the population of San Francisco increased from 500 to 150,000. California was suddenly no longer a sparsely populated backwater, but seemingly overnight it had grown into a major US population center.

Maybe mass immigration isn’t such a good idea for the locals… but then, why is CSU Long Beach removing a ‘symbol of oppression’ while supporting the exact same oppression themselves?

Back to the original article:

A statement on the university website said the gold rush was “a time in history when the indigenous peoples of California endured subjugation, violence and threats of genocide.”

According to the university, the bronze statue formally named “The Forty-Niner Man” evolved from the creation of the original college in 1949 and founding President Pete Peterson’s references to having “struck the gold of education.”

The statue, unveiled in 1967, shows a rugged-looking, bearded man sitting on a rock. It features no gold mining or panning tools. 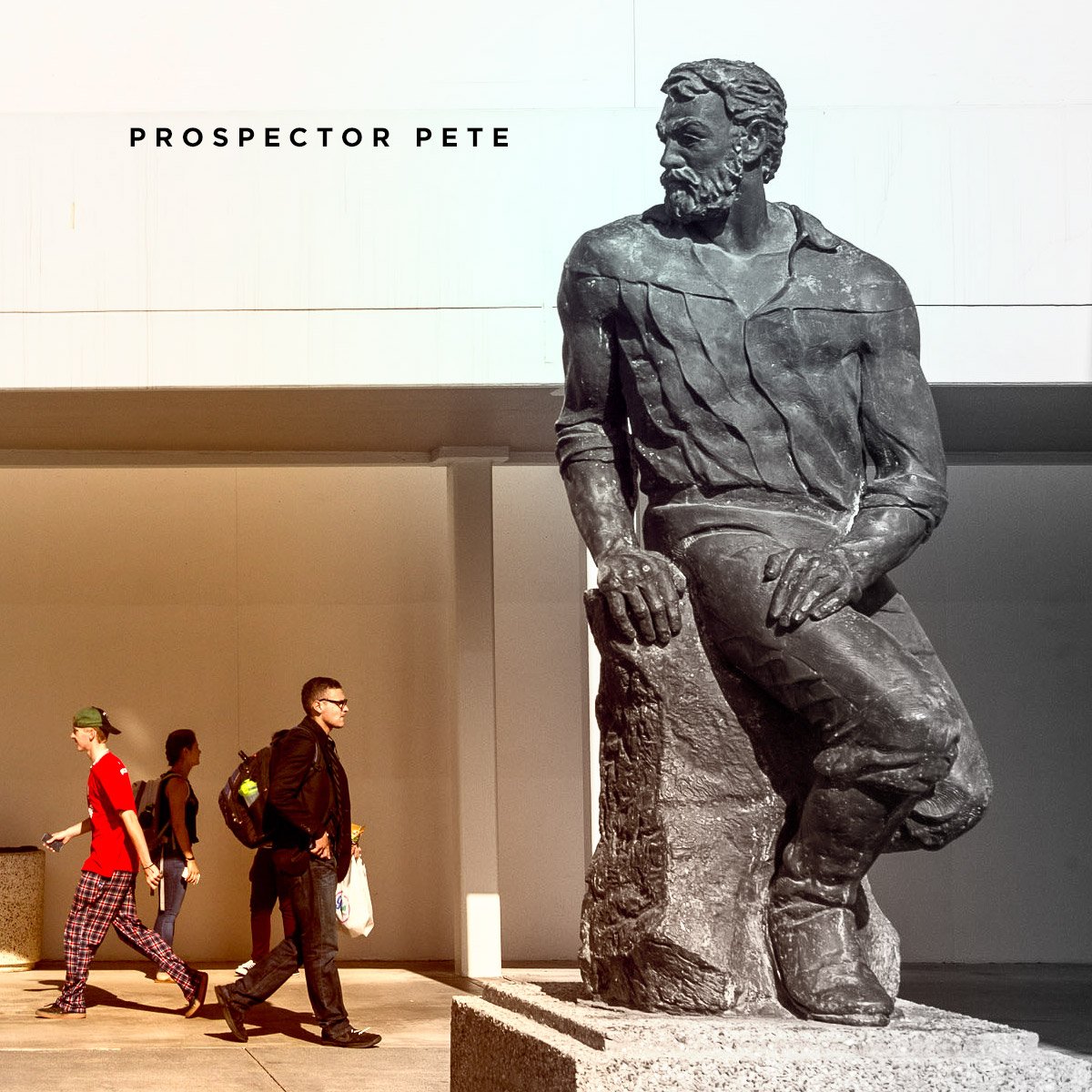 Perhaps they mean this Pete:

OHMIGAWWWWD! Misogyny! The wimminz kneel to the hunky white man!

In recent years, university athletics have moved away from the college’s traditional “49er” and “Prospector Pete” sports team and mascot names in favor of the nickname “Beach.”

Wait up, “Beach” is his new name? That’s racist against white men!

The university said the statue on a plaza will be retired to a campus area dedicated to alumni, but no further details were provided.

“No further details available” seems to happen frequently with these statue removals.

University President Jane Close Conoley announced the decision in an email Thursday after more than a year of controversy over whether the statue should be removed, the Long Beach Press-Telegram reported .

The campus about 20 miles (32 kilometers) south of downtown Los Angeles was once the location of an ancient village of the indigenous Tongva people.

The newspaper said the university’s Associated Students organization worked since September 2017 on a resolution to move the statue.

The resolution , which passed in March, said that prior to the gold rush era “the people of the Tongva Tribe were enslaved by settlers to build missions in the greater Los Angeles area” and were forced to assimilate.

There’s a brief timeline of the Tongva at the following link. As I expected, the Tongva were no strangers to initiating violence against the newcoming Spanish & Mexicans. By 1849, they had no villages or land of significance.

I did find institutional hostility towards them in the early days of California statehood but that would be government persecution of them, not the gold rushers persecuting them. Oppressive gov’t is a bitch, eh, liberals?

It added that more than 80 percent “of the Indigenous American population were killed in the twenty years following the gold rush era due to malnutrition, enslavement, murder.”

So, that 80% figure is for all California Indians between 1832 and 1870 and the majority of casualties were from smallpox and related diseases rather than “malnutrition, enslavement, murder”. No rounding up the Tongva tribe in concentration camps.

Malnutrition and murder were hardly unheard of among the 49ers themselves.

In place of the statue, the resolution said, should be “a recognition of our shameful previous association with prospectors.” It suggested a plaque.

These God-damned race traitors can turn in their American citizenships right now. If you’re ashamed of America then America is ashamed of you! How dare they hate on people trying to honorably improve themselves, at great risk, for their own eventual benefit! It’s a safe bet that some of these resolution drafters at a major California university are direct descendants of 49ers. They hate their own people.

Earlier this month, a statue depicting an American Indian at the feet of a Spanish cowboy and a missionary was removed from the city of San Francisco’s 1890s-era Pioneer Monument near City Hall.

Which begs the question, are these jokers tearing down their own statue because it’s what the cool kids are doing or because they fear the consequences of not following the Narrative? Or, because they want white America to disappear in shame “by any means necessary”?

More to come but I need to do some transcription.

One thought on “#Me Tear Down Statues, Too!”