Alameda County police have arrested a knife-wielding man who reportedly attacked congressional candidate Rudy Peters with a switchblade after making “disparaging remarks” about the GOP.

The suspect in the assault on Peters, who was only referred to as “a political candidate for a local congressional seat” in the Alameda County Sheriff’s Office report, has been identified as Farzad Fazel, 35.

The incident unfolded on Sunday as Peters, who is vying to represent California’s 15th congressional district in the House of Representatives, was visiting the Castro Valley Fall Festival. Police was alerted to the attack in one of the vendor booths at about 3:45 pm. As officers rushed to the scene, the alleged stabber had already fled.

Very common to see political booths at a local fair. They’re usually harmless, although the anti-abortion ones can be gross.

Citing accounts by eyewitnesses, police say that Fazel had been leveling “disparaging remarks” at Peters over his political affiliation and bashing other Republican officials

A verbal argument preceded a physical altercation, during which the suspect allegedly pulled out a knife and attempted to thrust it into Peters. According to police, “no serious injuries” have resulted from the incident. The outcome of the brawl might have been worse had the switchblade not malfunctioned.

Fazel was on a run not for long and was located and apprehended “a short time later” with the switchblade in his possession. He was taken into custody and charged with felony assault, criminal threat, brandishing a weapon and possession of a knife.

California isn’t as bad as the UK (facepalm). Most knives are legal here but the switchblade variety isn’t.

Peters is running against Eric Swalwell, the Democrat who currently represents the district. Swalwell praised the police for their swift action while denouncing the attack.

I strongly suspect Arab; cross-racial lines make a physiognometric read unreliable. Smooth forehead and low ears indicate impulsivity, as one would expect given the situation, but modestly-lidded eyes and tight ears indicate conformity. Jaw is masculine enough for this kind of direct action. Smirking for his mugshot is a good indicator of poor conscience, confirmed by his carrying an illegal knife when a legal one would be just as good (better for him, since straight knives can’t fricking malfunction). Conclusion, this kind of guy would normally be running a small business employing his cousins.

So, he isn’t a deranged loner and I suspect this was a crime of passion not calculation. He mouthed off to a political rival, probably lost the spat, forgot he now lives in ‘Murica not Pakistan and tried to slit the guy’s throat because why not. Now he’s smiling in police custody because his tribe is proud of him.

We’ll see what punishment he gets for this political assassination attempt. Kudos to the Alameda cops for a fast takedown.

Since we’re here, let’s look at the candidates.

HAHAAA! Trump Derangement Syndrome! No wonder the Muzzie turdfuck is smirking. I must give Peters respect for going MAGA style in Alameda County. That takes guts. I can’t decide if that’s a nervous cuckservative grin or he’s not used to smiling for the camera. His jaws & jowls suggest he can play hardball. But his eyes are hooded–that flap folding down in the upper corners–which indicate he’s suffered long-term stress. A bad frivorce is a good guess. *checks* I think Peters is the first politico to not have a picture of his wife & kids on his campaign website that I’ve ever encountered. That suggests my frivorce theory is accurate or maybe, he’s merely smart enough to not put up easy pics of his family for Antifa to hunt down. Prescient of him, if so.

I’ll be watching Peters for this election cycle with interest. Best wishes, Rudy! 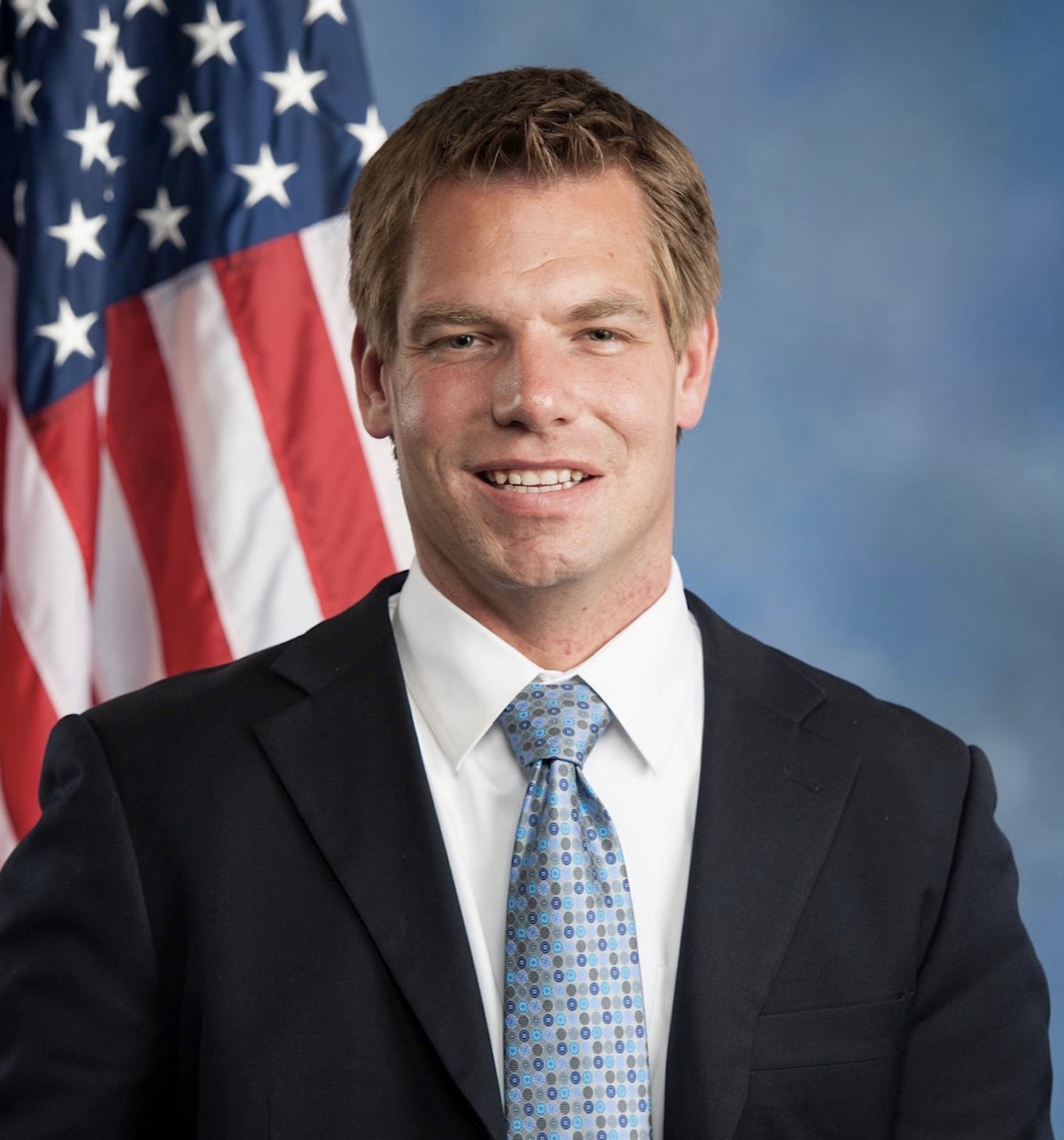 Eric Swalwell. His background per Wikipedia is textbook Leftoid career politician. Large ears and upturned nose suggest good sociability. Those brow lines indicate much more determination than is normally found in such politicians. Cthulhu will eat him sooner than he expects because that determination will inevitably lead him to violate the Narrative at some point. Or maybe not; that same determination means he’s a true believer in the Narrative. He’d probably be a rising star if being born white & male wasn’t holding him back.