I’ll be letting the pictures/videos do most of the talking on this but first, this followup on the vandalism of Confederate statue Silent Sam.

University of North Carolina at Chapel Hill police charged a professor with simple assault during the toppling of a Confederate statue on campus, the school told Campus Reform on Wednesday.

According to the arrest report obtained by Campus Reform, Dr. Dwayne Dixon, Teaching Assistant Professor at UNC’s Asian Studies Department, received a criminal summons for simple assault and warning of trespass on August 30 after the “Silent Sam” Confederate statue toppling on August 20. Dixon is due in court on Sept. 27.

Patrick Howley, editor-in-chief at conservative BigLeaguePolitics.com alleged in a tweet that the professor assaulted him, directing readers to a video showcasing the alleged attack. The video was uploaded to YouTube by Big League Politics Reporter Peter D’Abrosca.

According to the UNC Police incident report, which Campus Reform also obtained, Dixon struck Howley in the face and head.

The Durham County Sheriff’s Office had arrested Dixon on Aug. 18, two days before the UNC rally, charging the professor with going armed to the terror of the people and carrying a weapon at a public gathering, both misdemeanors, reported The Herald Sun. Dixon was carrying a semi-automatic rifle with at least three 30-round magazines, according to the police. The professor was released on $5,000 bail.

Da funk? In California, he would have passed the room temperature challenge for a stunt like that.

UNC police charged 18 individuals in connection with the “Silent Sam” protests on Monday, Aug. 20, Saturday, Aug. 25, and Thursday, Aug. 30, UNC spokesman Randy B. Young told Campus Reform. The school termed Dixon’s involvement a “personnel matter” and did not respond to additional inquiries regarding whether Dixon has tenure, whether he still teaches, or is on paid leave.

Good that cops are making arrests. I’d worried the investigation would have been all talk and no perp walk. The Herald Sun has more:

The Durham County Sheriff’s Office has arrested one man and is looking for at least four others it says carried a semi-automatic rifle, an ax and other weapons this month in anticipation of a march by white supremacists in downtown Durham.

On Sunday the Sheriff’s Office arrested Dwayne Emil Dixon, 45. He was charged with two misdemeanors, having a weapon at a public assembly or rally and going armed to the terror of people.

Dixon was among the hundreds who gathered downtown Aug. 18, in response to a rumored white supremacists rally. A rally never materialized, but the response resulted in an hours-long demonstration in front of the old Durham County courthouse on East Main Street.

Dixon was seen carrying a semi-automatic rifle loaded with a 30-round magazine and carrying at least two other magazines, said Maj. Paul Martin.

The charges were later dropped despite evidence like this: 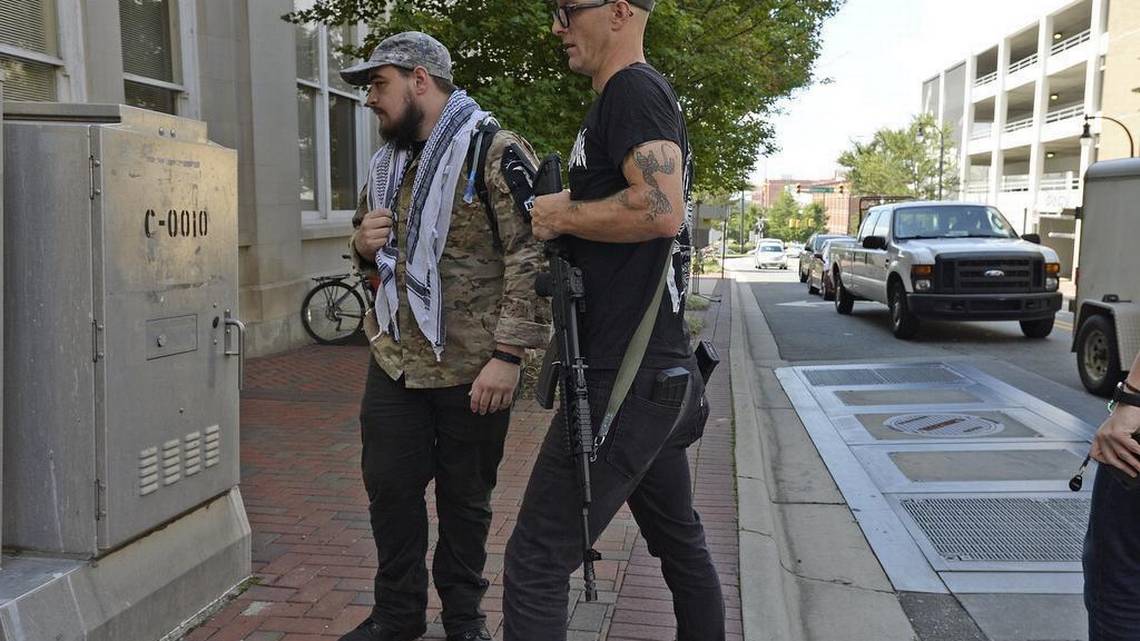 Some more pics of Prof. Dixon of UNC Chapel Hill: 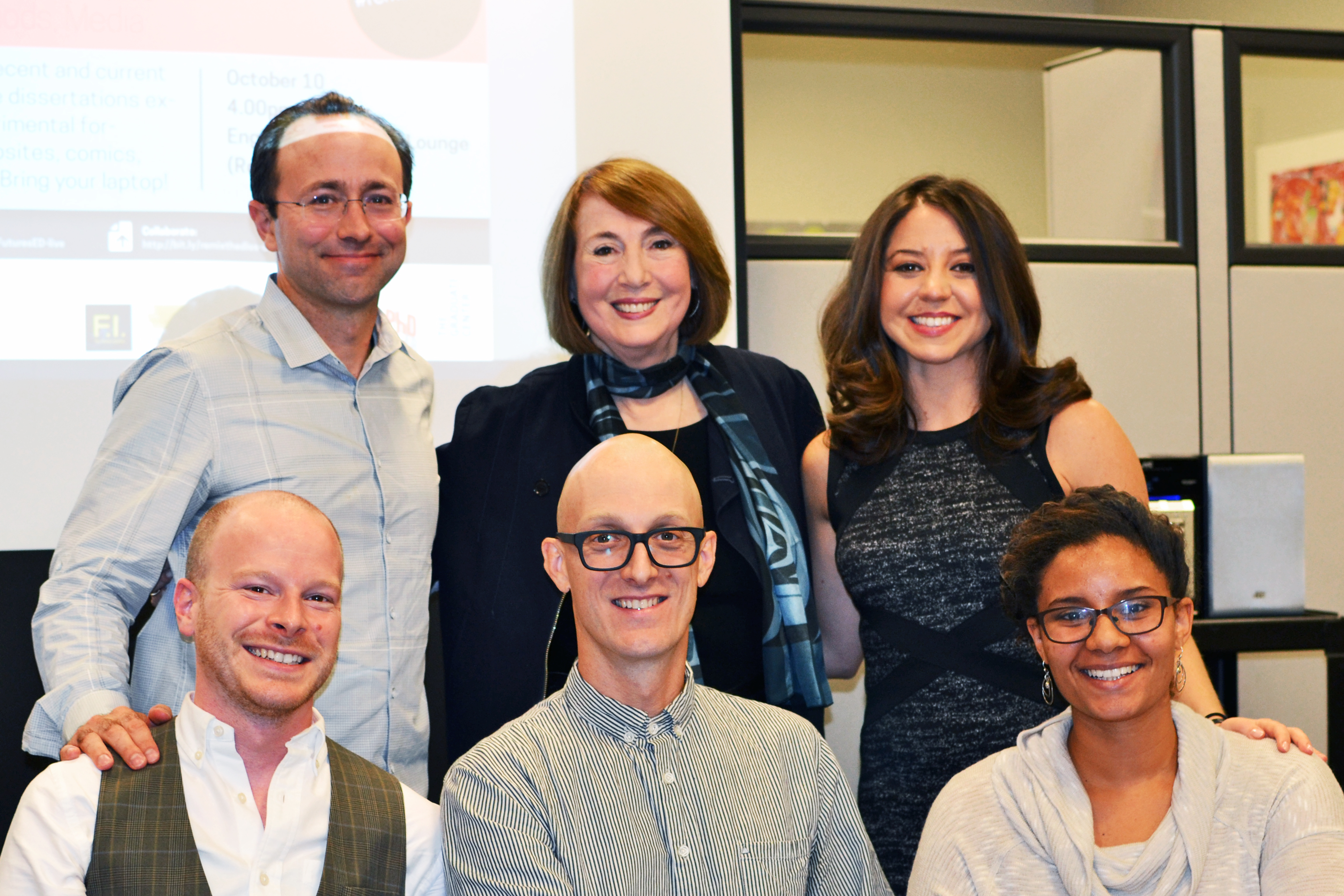 Dixon is bottom middle. This picture is from CUNY in New York, a Futures Initiative something-something panel in 2014 or thereabouts. His bio from there:

Dwayne Dixon recently completed his PhD in Cultural Anthropology at Duke University and is a visiting instructor in Duke’s Asian and Middle Eastern Studies Department. His research is focused on young people in Tokyo and their relations to globalized urban space, their use of visual technologies, and their understandings of self amid changing conceptions of adulthood and limited economic possibility.

Sounds kinda Deep-State-ish and a university “Futures Initiative at CUNY” sounds like Soros funding. I was surprised to discover he was a Japanese enthusiast–his wife is Japanese–when he’s so politically opposed to ethnic nationalism. Not to mention, spending years bouncing around North America’s East Coast participating in organized protests and militia-type activities.

But then, taking a Japanese wife could be construed as a symbolic attack on Japanese ethno-nationalism. 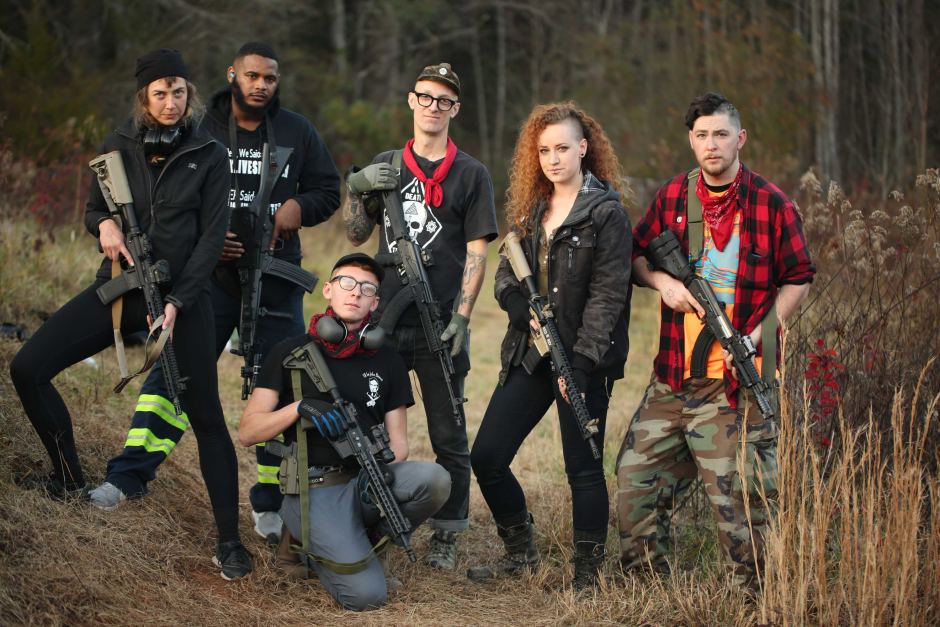 A group photo of the North Carolina chapter of the leftist Redneck Revolt group. Being the central figure suggests he’s the leader. It’s like the Seventies never stopped for some people and that’s a very bad thing. 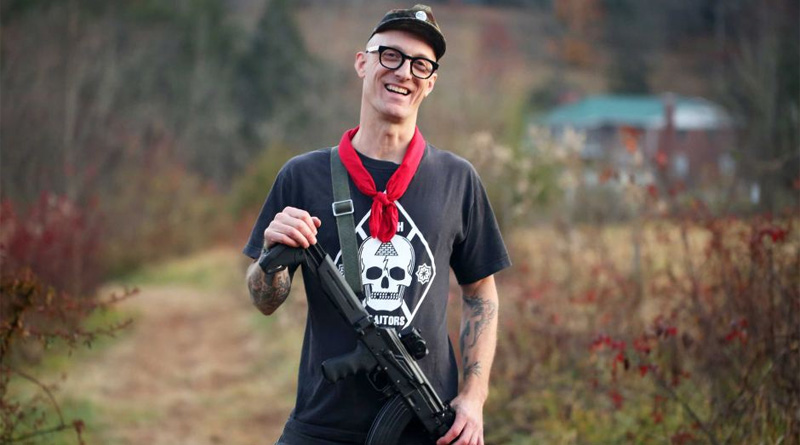 Black shirt with red bandanna is a common uniform for Antifa, as demonstrated in the following pic of an Oklahoma chapter (no known relation with Dixon): 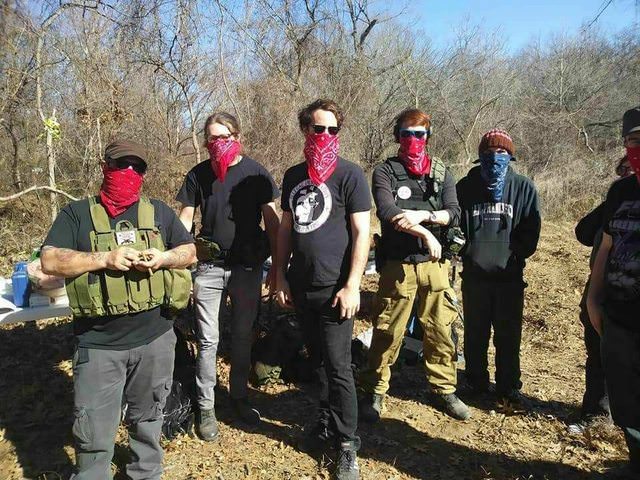 These boys are smarter than Dixon because 1. They covered their faces and put their rifles away when posing for the camera and 2. no women.

Dixon’s philosophy for the use of lethal force is captured in a video he made, hosted at the following link:

Dwayne Dixon explains why the left is willing to use violence.

When the Left uses violence, in the rare instances that it happens, it’s resistance. When those actions are taken it’s because some other kind of threat has already materialized and therefore, that danger coming from far-right action justifies or necessitates some kind of intervention with force, with bodies actually engaging and trying to interrupt that danger that’s now encroaching on specific bodies.

I really want to make a distinction between attacking and destroying infrastructure or inanimate objects, and what happens to people. And in that way I would then ask us to consider how it is right-wing or far right or how fascist violence gets used.

There’s an ideology already of exclusion and so in order to exclude people, you’re going to have to push them out, and that’s already necessitating force. You have to constrain them.

Translation, we’re victims even when we’re shooting you in cold blood, and if you oppose illegal immigration then you’re forcing us to shoot you. It’s all your fault, you see. Oh yes, we’ll be seeing Dwayne Dixon in the news again.

Big League Politics has more to say about Dixon. Remember James Fields from the first Charlottesville protest, who infamously drove his car into a crowd? Dixon claimed on video that Fields did that while trying to get away from Dixon brandishing an AR-15 at Fields. Link below, but when I viewed the clip it looked like Dixon was reading a statement that may or may not have been his own. A cursory review of the journalist’s work makes me think he’s the sort of shock-jock ambush reporter that I would not have patience for, either.

Although in a humorous twist, in one of the linked videos below the journalist filmed Dixon wearing a surplus German uniform complete with national flag. He really does look like a skinhead, although I doubt a true skinhead would take an obviously ethnic wife. Or still be on the payroll of a major university after posing with his rifle and would-be terrorist buddies and being arrested for wandering the streets of Durham with a rifle in his hands searching for political opponents.