Treacherous judge Susan Backus turns out to not be the worst offender in the Muslim terrorist incident in Taos County, New Mexico. From Fox News:

Child abuse charges against them were dropped because prosecutors missed the 10-day limit for an evidentiary hearing to establish probable cause.

During a separate hearing Wednesday, Judge Jeff McElroy dismissed the same charges against fellow defendants, Siraj Ibn Wahhaj and Jany Leveille. However, charges leveled against them on Friday, in connection to the death of a missing 3-year-old boy, remained.

Note, McElroy was on the case because Backus recused herself. Not remarkable given the number of death threats she’d been reportedly getting.

And the compound has already been bulldozed. That’s too fast. No prosecution or legal defense has yet been confirmed for the trial and surely they would want to see the place for themselves? Not that there’s going to be a trial, apparently, but how did authorities know that two weeks prior? For demolition details:

This is Judge Emilio Chavez. A judge with a recent history of unethical conduct according to the Santa Fe New Mexican:

The New Mexico Supreme Court on Wednesday reprimanded a state district attorney and a prosecutor-turned-judge for their misuse of subpoena power.

The disciplinary cases against 8th Judicial District Attorney Donald Gallegos of Taos and former prosecutor Emilio Chavez stem from 94 subpoenas Chavez issued in 2012 and 2013 without the approval of a judge or grand jury to gather information in criminal investigations before charges were filed. …

“What we have is a direct abuse of subpoena power,” Slease said.

Such subpoenas were used to identify suspects in an armed robbery at an electric cooperative in Taos on April 10, 2013, but attorneys representing the suspects objected to the practice.

Quashing the indictment of one suspect, a district judge ruled Chavez “had no reasonable basis in law” to issue the subpoenas.

That is deadly serious. As a prosecutor, Chavez illegally issued subpoenas and as a direct result, criminal indictments had to be thrown out along with the tainted evidence? How does this guy still have a gov’t job?

The disciplinary case resulted in two separate panels issuing conflicting findings and recommendations for the two men — one calling for dismissal of the charges and another recommending reprimanding Gallegos and censuring Chavez. …

Attorneys representing Chavez and Gallegos previously argued that the use of subpoenas by prosecutors during investigations, such as the probe into the co-op robbery, is a legal gray area.

Vigil said the court was “impressed by the lack of any bad motive” by Gallegos and Chavez.

But the justices determined both men had violated the rule of professional procedure for attorneys that prohibits the use of “methods to obtain evidence that violates the legal rights of a third person.”

The court also determined Gallegos violated the rules of professional procedure by failing to properly supervise Chavez when he was issuing the subpoenas in question.

The reprimands are deferred and will be withdrawn after one year if the men do not violate the rules of professional conduct during that time.

The court also waived costs of the proceedings for both men.

Translation, there was a power play behind the scenes. Chavez is still a judge so the bad guys won. I’ve no idea how needing a judge or grand jury to approve a subpoena can be a “legal gray area”.

*GQ digs* Aha. The fact of the reprimand being deferred and eventually withdrawn is how Chavez managed to keep his judgeship despite ethics violations. You can catch some on that internal drama here:

On the right is Chief Judge Jeff McElroy. He beat out his predecessor on the left, a poorly shaped skin suit called Andria Cooper. She has no part in this but damn, that ugly, stretched-out, crazy-eyed, “more miles of cock than wiring in the municipal power grid” look. The pink ribbon on her flat chest next to the Cross pendant doesn’t help.

Anyway, McElroy helped Chavez get his judgeship per the preceding link. McElroy is also a Sodomite so there may be additional “ethics violations” between him and Chavez. McElroy’s previous lover, Enrique Noguera Tinoco died between 2013-17. I don’t involve my targets’ children often but this exception is important:

Happy Birthday Dad!
Today was my dad’s (Jeff McElroy) 59th birthday! This reminds me that we’ve been an “official” family for almost 15 years. YAY ADOPTION! On a side note, August 3rd was my other father’s (Enrique Noguera Tinoco) birthday

McElroy is a sexual deviant who managed to adopt an innocent child into his web of deviancy. That puts the next article in perspective:

The order late Tuesday afternoon came from Judge Jeff F. McElroy, who signed the writ on behalf of Judge Sarah C. Backus, the judge assigned to the case.

The alternative writ requires Taos County Clerk Anna Martinez to begin issuing licenses, or explain why she won’t during a hearing scheduled for Sept. 5.

KOB-TV reported that Martinez would not contest the order and begin issuing marriage licenses to same-sex couples on Wednesday.

A web of feminism, sodomy and anti-Americanism begins to form. This is as far as I can go with public sources from a distance. There is some serious institutional rot in Taos County.

On a closing note, notice anything strange about these mug shots of the Muzzie wives? 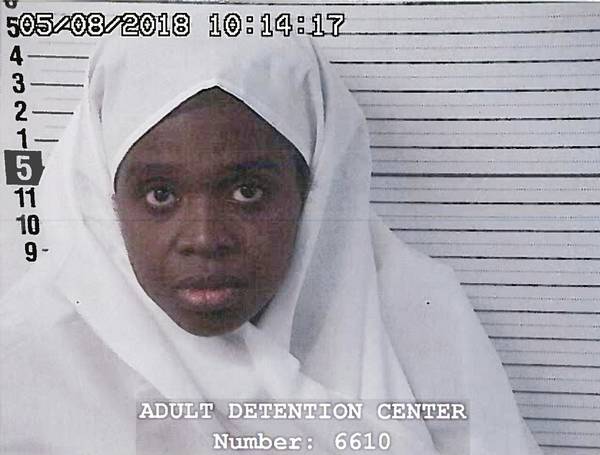 They’re wearing head coverings for mug shots. The second picture in particular is nearly worthless as an identifier. The rot in Taos County goes far beyond the Chief Justice being a flaming homosexual child violator.

2 thoughts on “The Taos Judges Who Pardoned Terrorists”