There is ongoing debate on whether married men can be considered MGTOW. On one hand, they can certainly learn to put their self-interests above those of, as God would say, their lesser halves. On the other hand, they’re literally married to the System of wives, kids, threatpoints and the public-education-industrial complex. That understandably crimps one’s style, especially if wifey is pleasant enough that one isn’t interested in missing persons and insurance money.

But the following is definitely NOT a married man going MGTOW:

A Scottish dad reported missing by his partner of 27 years turned up in the US married to a secret lover.

Malcolm McGregor’s family called in cops after he vanished from the home he shared with childhood sweetheart Cheryl Cowie, 37, in Motherwell, Scotland. The town is about 15 miles southeast of Glasgow.

But the shameless McGregor was seen beaming in wedding snaps after fleeing to Utah to marry new wife Bell Valek after wooing her on Facebook.

Do you see the red flag?

But Cowie was horrified after it emerged he’d jetted 4,500 miles to Utah and was now shacked up with his new wife.

Friends told of Cowie’s anguish after seeing the marriage pictures showing him cozying up with his missus, who has taken his surname.

One friend said: “It’s just awful. It must have been devastating for Cowie to see those pics.”

“Malcolm and Cheryl are childhood sweethearts. They’ve been together for over 20 years — they met at school. They have two kids and seemed like the perfect family.”

Ah, there’s the red flag. I’d wondered why there was a sonic boom last week with no fighter planes around. It was a sonic REEEE!

The article has little more to say but let’s look at some pictures for the physiognomy.

Ah, young love. They both have rounded eyebrows and fleshy noses, suggesting open, carefree personalities. They even have the same… chin… so, similar testosterone levels?High cheekbones are associated with dominance.

Does she look drunk to you? 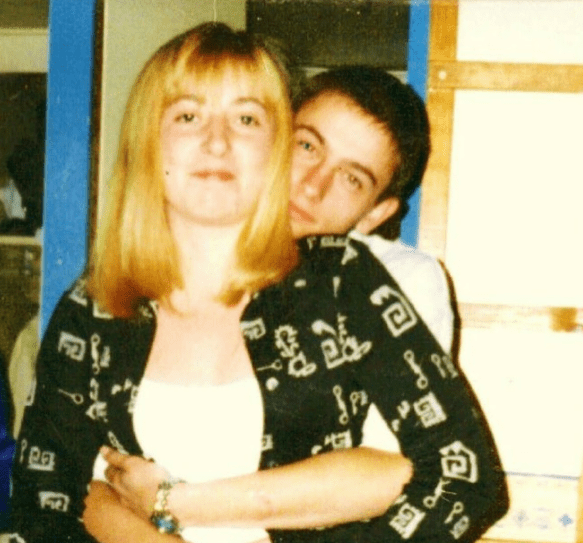 Uh-oh. The romance is gone. He’s trying to hold on to her

Cheryl Cowie today. Her effort to smile for the camera barely cancels out her thinned-lip bitch face. Her jowls can confirm. Either she scowls a lot or she has a lifelong habit of gum-chewing.

This is the best recent picture of current McGowan I can find. Notice the eye flaps hanging over his eyes? That’s a good indicator of long-term stress. I see he’s tried to project more masculinity by growing a goatee but he isn’t managing it well. That’s not because he’s a nerd who thinks grooming is an unproductive habit so I’d guess his personality is a little careless and he tends to give 90% of his effort rather than 100%. The goatee itself is about 90%.

I’ll assume his new wife, Bell Valek, has not had Botox or plastic surgery. She’s undeniably ugly… problem glasses and hoop earrings so not a virgin. Her full lips have a good “cupid’s bow”, that divot under the nasal septum, so she probably has a strong sex drive. Her nose seems bulbous, not just fleshy, which indicates wealth (more specifically, a preoccupation with money which McGowan probably didn’t bring with him).

Cheryl Cowie probably turned McGowan’s life into an insufferable Blue Pill hell. He found a mistress, Valek, who is financially secure and wants a boy toy. McGowan, unable to free himself from or endure the loveless marriage, took the offer to start a new life. This makes him a “kept lover” but looking at the stress indicators, he saved his life getting away from that cow Cowie.

He’s still thirsty, however. Still eager for female approval. Unable to act independently, which makes this not a MGTOW story. Had he packed up, vanished and reappeared living in a boat or trailer in a different country, that would have been MGTOW.

A man can’t self-actualize until he cuts the apron strings. You aren’t free if a new woman is rescuing you from the old woman. (Game wardens call that poaching.) I hope Valek is kind to McGowan; there is hope because she is now Mrs. McGowan; but McGowan himself does not have the strength of character to break free from the Gynocracy.

Going MGTOW is a true achievement requiring fortitude and discipline. There’s a lot of hardwiring and habit that a guy must break through to “merely live poolside”.