I support the Drug War because the people who use recreational drugs are the same people who commit other crimes and drug possession is the easiest to prosecute. The San Francisco Gate newspaper inadvertently proves this wisdom:

SEATTLE – Washington state’s penchant for getting high is trashing the place.

Plastic “doob tubes” and small Mylar bags used to package pot are moldering in gutters, bleaching out in landfills and bobbing in waterways.

Concentrated nutrients and fertilizers left over from cannabis growing operations are being dumped in public sewers and making their way past wastewater treatment plants into Puget Sound. And millions of pounds of weed harvest waste that could be composted are instead getting trucked to landfills.

This, in a part of the country that prides itself on being environmentally friendly.

“We’re seeing a lot of marijuana packaging in our public spaces,” said Heather Trim, executive director of Zero Waste Washington, which organizes litter cleanups. “Cannabis packaging is adding to our load, which then gets washed into our lakes and Puget Sound.”

What a surprise: Habitual users of recreational marijuana are litterbugs. One might think they’d be more law-abiding now that there’s one less law to abide by but alas. 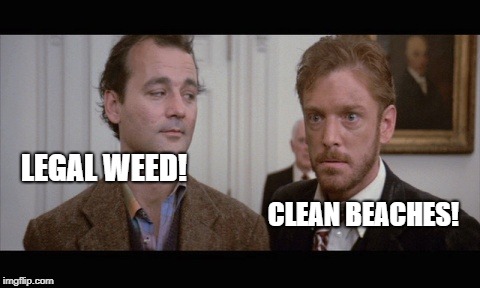 Pre-rolled joints, for example, spiked in popularity by 67 percent in just one year, according to BDS Analytics, a cannabis industry data firm. They are sold for as little as $2 and come in small plastic containers. But doob tubes usually cannot be recycled, even when made of recyclable plastic, because their small size means that they fall through the grates of the recycling machines.

We can solve this problem with either buckets or punitive, anti-business legislation. Decisions, decisions….

The state requires that landfill-bound harvest leftovers be ground up, mixed with other garbage, bagged and held for days to render it unusable by scavenging smokers. Some rural growers compost their plant waste on site, but Trail Blazin’ Productions is in an urban environment near a methadone clinic. On-site composting is not feasible.

“We keep our garbage in our facility until collection day so the addicts can’t get at it,” [Danielle Rosellison, president of the Cannabis Alliance] said. “We grind it up, mix it 50 percent with stuff like our office garbage and pour bleach or contaminant in there, as well.”

That’s disgusting. See how addictive weed is? See how badly it warps human behavior? Addicts will crawl through dumpsters and smoke anything that looks like devil’s lettuce EVEN THOUGH IT’S NOW LEGAL. I was promised all through the ’80s and ’90s that pot was addictive only because it was illegal. Legalize it, they said, and people will calm down and only smoke recreationally and it was harmless anyway. Lies.

Those poor cancer patients, freebasing cat turds from the landfill because they thought it was a used roach. Weed was too illegal, now it’s too expensive, next it’ll be our newest civil right. You know what we should do? We should teach schoolkids how to root through agricultural waste and identify what’s healthy to consume. They’ll thank us when it comes time to pay back those $100k student loans.

The Hollingsworth Cannabis Co. sells about 40 pounds of marijuana per month, whether as flower or oil. While it uses solar power and compost its plant waste on site, it cannot pay more for packaging. Consumers balk at paying the retail markup.

“I am sitting here looking at all the packaging that goes into weed. Put a pound of weed into a jar, break it down into one-gram units – that’s 454 single jars, tubes, bags,” co-owner Joy Hollingsworth said. “I don’t think there is any true way around this problem, the way the laws were produced in Washington” – specifying the weights in which marijuana can be sold.

I don’t think anybody in authority thought about legalizing weed harder than “Dude, like, we pass this law and won’t get busted or nothin’ no more. Pass me the bong.”

Alex Cooley is co-founder of cannabis operation Solstice and founding president of the Cannabis Alliance. He said the sustainability focus of many cannabis companies has waned as competition has increased. “I’ve never sold so much cannabis for so little money,” he said. “As a result, we’re focused on pennies, and packaging is a big area that is easy to be cut.”

In Washington state, there are more than twice as many producers and processors as retailers, leading to intense competition for shelf space in shops that display marijuana products in glass cases like jewelry.

Everybody wants to grow it. Nobody wants to market it. Hmm. Even Colombian drug lords know better than to use their own junk. But to be fair, this may be the result of restrictive zoning laws.

Consequently, “the packaging is as important to consumers as the product itself,” said Jason McKee, general manager of Ganja Goddess, a retail pot shop in south Seattle.

Therein lies the problem. Many states are studying Washington’s laws to create a safe supply chain. But they, like consumers, are not focused on the combined effect of sending hundreds of millions of plastic tubes and Mylar bags into landfills every year. What’s more, many consumers mistakenly try to recycle that packaging.

“We have all these materials coming online that are not recyclable, and they’re causing contamination in the recycling system,” Trim said. “People assume that they are recyclable and feel that they should be recyclable. But they are not.”

The only viable option, Cooley said, is to make sustainable, recyclable packaging a regulatory requirement for the industry. But some fear that legislating higher production costs could bankrupt cannabis farmers who have difficulty accessing capital.

Leftoids gonna swim left. You can’t afford sustainably recyclable packaging because your product is taxed at 25% ($315m of 1.4b) and not allowed to be sold in bulk. This is obviously the fault of TOO FEW regulatory burdens.

Get woke, get stoned, go broke.

5 thoughts on “Choose the Form of the Destructor 2!”