I spent the weekend in my kilt watching the Scottish Heavy Athletics and buying a new belt for my kilt because I outgrew the old one–all muscle from the gym, at least, but what’s a guy to do when the weight for height is 56lbs?

(Not me, not the Monterey event)

While there, I got sold on some gourmet mustard. The guy had a spicy variety he’d tamed with vinegar and citrus and I thought to myself, “vinegar? Seafood”. So I bought it, baked some rainbow trout with a Parmesan crust, spooned the mustard on as a spread and it was really good. Not too spicy, kept the trout from tasting dry, a hint of orange flavor to the flesh and not a gram of added sugar!

I’m going back to the fairground next weekend for “Monterey Baconfest”. Honestly, I didn’t even know Baconfests were real. Gonna load up on bacon, some precooked burger patties, add a chipotle mustard I bought at Scottishfest and have gourmet bacon cheeseburgers for work-lunch for a solid week. A different bacon every day!

I haven’t had this much fun eating as a bachelor since a couple years ago, when I impulsively bought 20lbs of assorted steaks for an entire summer of cookouts. Pre-seasoned peppercorn is awesome. *checks* Hey, they’re still in business. If you’re a barbecue-dude near Fresno or Medford then try http://pacificprimefood.com .

And they say MGTOWs don’t know how to have fun!

On a related note, did you know that one way to curb invasive species is to eat them?

Can We Really Eat Invasive Species into Submission?

A story of Bolivian farmers who began eating the endangered yet invasive species named “Paiche”, the world’s largest freshwater fish at a weight up to 400lbs. 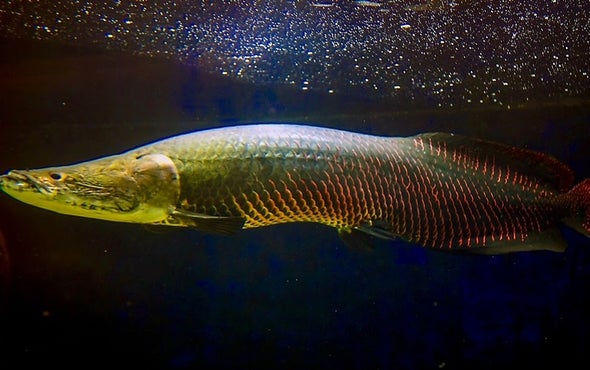 Seems the bugger got flooded out of its natural habitat and began consuming all the other freshwater fish it could find. Bolivians retaliated by putting it on the menu. But now environmentalists fear it’s become too profitable to be endangered anymore.

Bolivia is now faced with a controversy that, for the last decade, has been a central debate in the young field of invasion ecology here in U.S.: Could human hunger help control the spread of invasive species or will the rules of capitalism, combined with our unquenchable thirst for more, only make matters worse?

The article doesn’t answer the question so I will: The profit motive will ensure both that it doesn’t go extinct and that its reign of terror upon nonnative habitats will not go unpunished. Behold! A problem being solved without massive, punitive, centralized, totalitarian gov’t policies implemented top-down from U.N. Headquarters! And the worst that can happen is the Paiche is forced to go back!

September 9, 2014 — It seems like whenever an edible animal becomes an invasive pest, someone suggests that getting people to eat it will solve the problem. For instance, in 1998 the state of Louisiana induced famous New Orleans chefs to develop recipes for nutria, which are eating away the state’s coastline. Even highly visible invasive plants inspire dreams of a gastronomic solution — there are at least four kudzu cookbooks. These schemes have never worked: Nutria continue to gnaw away at Louisiana (and Maryland and Delaware), and kudzu occupies 7.5 million acres in the U.S. and is spreading by some 125,000 acres annually. …

Why not? If the species is there, not supposed to be there and capable of being sold for $5 per pound then that’s a strong economic incentive to “reduce the population”. That’s much more efficient than paying a legion of botanists to kill it and NOT eat it.

However, even if the public could be convinced that an invasive species is a delicacy, a gastronomic approach to management is problematic for four big reasons.

First, it might not work. For dining on an invader to lower its population size, mortality must exceed the birth rate. Often mortality from harvest is simply what wildlife biologists call “compensatory” — it removes individuals that would have died anyway by old age or other means. Even if harvest mortality is not just compensatory, it must impose a huge, consistent toll on reproductive individuals to overcome reproduction, and a characteristic feature of invasive species is a very high reproductive rate.

Cry me a river, wide and deep. Eating it might not kill all of the species so, what? Eating it must not be attempted? Why should we discourage economic incentives for killing invasive species even if it’s not a Final Solution?

Second, creation of a market for an invasive species provides an incentive to maintain the species in order to sustain the market, or even to spread the invader in order to improve profits.

Um, wouldn’t these supposed farms not come into existence until after the wild population is controlled? You don’t have to farm kudzu to get more of it. You only have to close your eyes and count to ten. That’s why it’s an invasive species: we can’t easily restrict its wild growth.

Illegally introducing fish in order to create a sport fishery is common practice and suggests the sort of spread that marketing an invasive for food can produce.

Third, if a nonnative species becomes an integral part of regional cuisine, it may become a revered cultural icon. Introduced wild boar are ecologically disastrous to the Hawaiian Islands, eating and rooting up endangered plants, causing massive erosion, and producing breeding pools for nonnative mosquitoes that carry malaria and pox that threaten the existence of several native bird species. Yet attempts to eradicate or even control populations of wild boar engender heated, heartfelt opposition from Hawaiians who have feasted on them for generations and view them as a valued part of their culture.

This is why we call them eco-Nazis. Yo, environmentalists, if the locals don’t want you micromanaging their ecology then guess what? You don’t get to micromanage their ecology. Let them enjoy their mosquitoes & malaria, if wild boar truly is what’s causing the problem.

I’ve spent time on Kauai. They have chickens there, chickens everywhere. A chicken coop was left behind during the Hurricane Andrew evacuation and by the time the natives returned, the wild chicken population was established. Today, Kauai is the least bug-infested island in Hawaii and the natives are content to have a self-sustaining, emergency food supply for the next hurricane. An invasive species improved island life for both locals and tourists.

“Existing laws didn’t take this situation into account” is not a reason for anything except ignoring existing laws. Those prohibitions on transporting invasive species probably don’t apply to dead specimens processed into sushi and if they do, they need to be changed to encourage the scorched-earth extermination of the edibly unwanted.

If you want to get rid of a species then make it profitable to hunt & kill. California has success stories of this sort: sardines during WW2 and sea otters are prominent in local history.

On the plus side, lionfish are tasty — the flesh is white, firm and mild. This has led restaurateurs to feature lionfish at premium prices.

Mmm. *Gunner breaks out the gourmet mustard, fantasizes about SCUBA spearfishing his dinner among the coral reefs of the Bahamas.*

There is no evidence that this market has dented lionfish populations, but popular media reports about it have had the unfortunate effect of spreading the idea that a market can help control invaders, with virtually no discussion of efficacy or downsides.

The only downside mentioned in this article is the locals taking advantage of a new, tasty, plentiful food supply hasn’t yet resulted in the food supply’s disappearance. If that’s a problem then get out of my way, hunger-striking hippies. This MGTOW loves all of God’s creatures… fajita-style… and there’s money to be made. I wonder if Monterey Baconfest will feature invasive species? Everglades Tegu bacon?