You can learn a lot about an animal by studying the creatures that prey upon the animal. How they go about getting food illustrates the animal’s strengths and weaknesses. A second article from the Soros-funded Demos think tank discusses the magical “working class” that Communists love to prey upon.

Social scientists use 3 common methods to define class—by occupation, income, or education—and there is really no consensus about the “right” way to do it. Michael Zweig, a leading scholar in working-class studies, defines the working class as “people who, when they go to work or when they act as citizens, have comparatively little power or authority. They are the people who do their jobs under more or less close supervision, who have little control over the pace or the content of their work, who aren’t the boss of anyone.” Using occupational data as the defining criteria, Zweig estimated that the working class makes up just over 60 percent of the labor force.

The second way of defining class is by income, which has the benefit of being available in both political and economic data sets. Yet defining the working class by income raises complications because of the wide variation in the cost of living in the United States. … The third way to define class is by educational attainment, which is the definition used in this paper.

How interesting that the old definitions of “working class” no longer apply. No occupations are reserved by the Elites and income is so fluid that ‘Old Money’ is a concept no longer in use. One would think Communists would declare success at such an achievement even if it be the achievement of their enemies.

Instead, Tamara seeks to redefine “working class” by education. That’s an odd choice because higher education is so massively subsidized by gov’t and banks that a massive student debt bubble has formed. It’s not like med school is a hopeless dream even for ghetto rats today; you only have to sell your financial soul. Just like the preppy whities do! Equality! Fraternity! Bankruptcy!

Education level has the benefit of being consistently collected in both economic and political data sets, but, more importantly, education level is strongly associated with job quality. The reality is that the economic outcomes of individuals who hold bachelor’s degrees and those who don’t have diverged considerably since the late 1970s. While people with bachelor’s degrees experienced real wage growth in the 30 years between 1980 and 2010, incomes among those with only a high school education or some college declined precipitously.

This is entirely false. The middle class has been hollowed out since the 1970s. Bachelor’s degrees are not worth more today than when the Baby Boomers were young. Indeed, outsourcing/immigration is so heavily used to suppress wages that most economic growth recently have been in the trades because those jobs can’t be “offshored”.

Today having a college degree is essential (but no guarantee, of course) to securing a spot among the professional middle class. As unionized manufacturing jobs got sent overseas, the once-blurred lines between occupation and class grew quite sharp. The blue-collar middle class is an endangered species, shrunk to a size that makes it no longer identifiable in national surveys.

The blue collar was never the ‘professional middle class’. It WAS the working class, back when America had a manufacturing industry. That entire working class died… and they know the Communists are responsible for that. They know what you did to them. Every time you scream for more sanctuary cities, sanctuary churches, sanctuary universities, sanctuary STATES and the wholesale abolition of the Border Patrol, they remember why they don’t have jobs anymore. M.a.s.s…I.m.m.i.g.r.a.t.i.o.n.

America’s manufacturing sector used to be a Democrat stronghold. Unions bought many, many elections for tame politicians. When immigration was weaponized and free trade implemented, the unions screamed at their congressmen to stop it all. The unions knew what would happen to the manufacturing sectors, including themselves personally, so they pulled every string to stop the globalist agenda.

And every politician they owned, every single one, to the last man, openly defied the unions. Those Democrats preferred unlimited immigration and Third World sweatshops to bushels of reelection money. That was an early “oh, shit” moment for me. Politicians don’t do that. They don’t betray longtime supporters with endlessly deep pockets. Except they did… for the globalists.

The downside of using education to define the working class is that education is not a perfect proxy for establishing the power or autonomy one has in the workplace or society—the traditional definition of class. There are definitely well-educated workers who hold menial jobs or jobs that pay low wages, just as there are less well-educated workers who have jobs with great autonomy or power. It is a blunt definition, but in the aggregate it is a reasonably accurate way to distinguish between the working class and the middle class.

“In this brief, “working class” is defined as individuals in the labor force who do not have bachelor’s degrees. This includes high school dropouts, high school graduates, people with some college, and associate’s-degree holders. It includes the unemployed, who are counted as still in the labor force as long as they are actively looking for work.”

Nope. Not seeing it. She’s smoking the good stuff. Her self-contradictions drag on for several more paragraphs, omitted.

There is no doubt that the United States has a serious voter turnout problem. Over the past 4 decades, turnout in presidential elections has hovered around 60 percent. In 2016, 61 percent of eligible voters cast a ballot. And among that meager percentage, wealthier and white voters show up in greater numbers than others. In 2016, 48 percent of people with incomes below $30,000 voted, compared to 78 percent of people with incomes above $100,000.

It’s like the wealthy care more about being looted than looters care about finding victims. That might be because the gov’t helpfully does the looting for them. No need to get off the couch and smash a storefront window; just wait for the monthly check.

Why is low voter turnout a problem, anyway? It increased the voting power of those who do care to vote. This is a good thing; the only people who should have a say in gov’t behavior are people who care enough to suffer mild inconvenience. 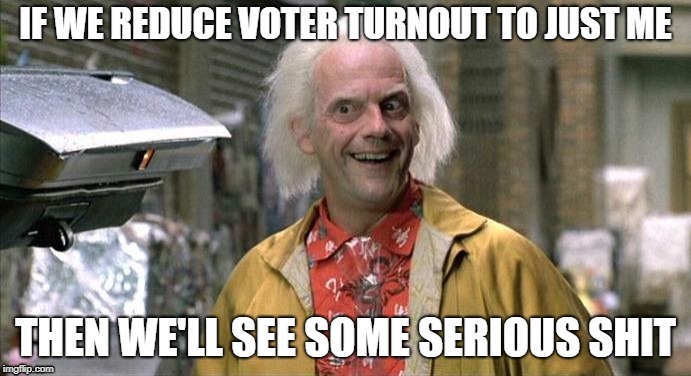 But yes, liberals love, LOVE increasing voter turnout. Absentee ballot abuse is a good demonstration of why. We have “motor voter” laws in California to make voting anytime, anywhere possible. (In fact, voting absentee has recently been made opt-out mandatory.) What typically happens is a ghetto gets its ballots delivered in the mail. “Community organizers” hold a rally to incite the dupes to vote their way and pressure them to fill out their votes on the spot. That way, the vote is cast the way they want even if the voter has second thoughts after calming down.

And contrary to popular perception, voters with incomes below $30,000 overwhelming cast their ballots for Hillary Clinton over Donald Trump, by 53 percent to 40 percent.

HAHAHA wishful thinking, Barbie! All those manufacturing people remember who screwed them out of an INDUSTRY! Even her numbers are serious. Trump promised no freebies and still got 40% of the freebie-loving demographic? Perhaps liberals shouldn’t have backstabbed Bernie Sanders quite so enthusiastically.

Since 1972, the difference in the policy preferences of voters and nonvoters about government’s role in our society have widened, with voters much more aligned with conservative preferences and nonvoters more aligned with progressive policy preferences. Missing voters, who are more likely to be low-income, are more liberal on questions of redistribution in particular, specifically on the need for government to provide jobs, services, and health care.

The low-income are most likely to be dependent on gov’t freebies? You didn’t need a think tank for that finding. This is a major motivation behind tax-and-spend, the impoverishment of taxpayers. You rob (er, TAX) people until they can’t make it on their own anymore and then offer them the chance to fleece the next guy like they were themselves. “It’s your turn, dude! Free money! Let me help you screw the rich!”

Politicians focus their campaigns, and all of their polling, on motivating “likely voters” to cast their vote for them. But structural barriers, including burdensome registration procedures, combined with an enthusiasm gap means that the working class is more likely to be missing from the pool of “likely voters.” And so the agenda is set by an electorate that is more white and more affluent than the nation as a whole.

This is a very telling insight into the Commie-vulture mindset. Aren’t these the tolerant, color-blind people I’ve heard so many good things about? How quickly they drop the act in order to discuss marginalizing whites in gov’t and encouraging the politics of envy.

Whites are the most productive race so if we lose gov’t power then we’ll be looted into oblivion. Along with successful non-whites, let me note.

One could conclude from this research that the recent conservative attacks on voting rights, from requiring photo identification to shortening early voting opportunities, both of which dampen turnout among younger, lower-income, and voters of color, are clearly designed to preserve an ideological hegemony that doesn’t reflect the needs of all the people in our democracy.

In saner times, the police would be allowed to investigate Tamara and Demos for vote fraud based on this paragraph alone.

It’s all too common to hear a political pundit say that most Americans identify as middle class. But it isn’t true. Part of the problem is that many polls don’t even include the option of identifying as “working class,” instead offering only upper, middle, and lower class as options. It turns out that when polls offer “working class” as an option, just as many people self-identify as working class as middle class.

Are you upper class, middle class, lower class or a Loyal Citizen?

Peeking under the hood of Leftoid HQ is relieving. They’ve exhausted their prey and are scrambling to find more ways to get their tyrannies enacted. The old ways of class division and income “inequality” have entirely collapsed thanks to ruthless implementation of globalism. They’re now reduced to courting college dropouts (like Bill Gates?) who have no control over their working conditions (in violation of OSHA?) and the prospects are so meager, they want to not only extend voting privileges to all illegal immigrants but FORCE THEM to vote as well.

Somebody is on the wrong side of history.

7 thoughts on “Wolves Talking About Sheep”