Keith on Dalrock’s has this to say about sex preferences during a crisis:

“I believe that you are correct that men transmit culture to future generations. But a civilization needs to meet one criteria before that happens: survival.

“I think that’s the whole point about preferring female lives over those of men. Giving your population the best chance of survival by producing as many offspring as possible. During times of crisis that is the primary concern.”

But this isn’t true. That’s what Dalrock was saying in his OP. During the Titanic’s sinking, the effort to prioritize women and children first directly caused women and children to be hurt because they panicked over their man’s absence. It’s also what I said in a digression on evolution there. When you prioritize the survival of non-men over men, you get FAILURE at all levels. Not survival. I linked to the Survivor television series to make my point:

Would a village of 100 women and one man be able to sustain a healthy birth rate? It’s a trick question because all them will starve before any children are born, excepting the man and as many women as he can/cares to provide for.

Our society has maximized the living standards and empowerment of women, with child support as the governing principle in all sexual/marital relations…men are now considered disposable and fathers are, in fact, regularly disposed of… and as a direct result the birth rate has cratered. The exact opposite of evolution’s prediction.

Women don’t naturally want to have babies. Instead, they envy men and want to displace us; that’s where all these career women are coming from. Also, mothers will kill their own babies for their personal convenience: abortion. Every single abortion in the West happens only with the mother’s voluntary signature on her child’s literal death warrant.

Evolution says that survival is only a matter of fertilized eggs in wombs but actual human experience is that women are helpless without men in any context and given the chance, won’t want to reproduce anyway. That torpedoes evolution dead center.

This also gives reason to reexamine why men value female life over male life. Isn’t it curious that having built civilization, we aren’t concerned with being its primary beneficiary? That we’re often okay with not just risking our lives for Barbie but willingly dying for her instead of just finding another girl? Once again, evolution’s prediction fails us.

Evolution says men are, or at least should be, concerned with bedding as many women as possible instead of fidelity to just one or two. But this is not how men behave. Men are ruined by frivorce emotionally as well as financially. Why does Barbie kicking us out of our family’s lives hurt so much when we “should” be moving on to other women anyway?

The truth of human nature is simple: we know what the right thing to do is and we don’t want to do it. A humble yet profound reason why one should be Christian.

Maybe I can’t explain this well. No evolutionist ever thought I had a point. But maybe I’m not supposed to be able to explain this. Evolution is updated yearly to accommodate new evidence, which itself is good proof it’s wrong. If we had to update the theory of gravitation every year because we kept finding new circumstances in which it didn’t work then it would be scientific trash.

I just don’t know what to say anymore. Modern humans are a species in denial. Evolution does not accurately describe human behavior, the fossil record, the extent of biodiversity, how biologically unnecessary systems like vision came into existence… and the principles of evolution just happen to preach the dark gospel of “do what thou wilt, the only virtue is victory”… and it’s become the dominant global religion so completely that many Christians believe God evolved life on Earth in defiance of God’s documented claim to have created life. 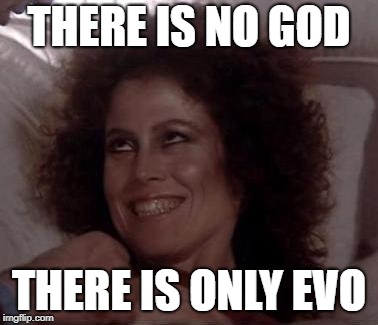 It’s a rough time to believe in the Author of Life.

3 thoughts on “There Is No God There Is Only Evo”