I said I’d case this broad when she crossed my radar with the epic comment “Don’t be afraid to relocate to get your first job even if you have to leave NYC” in my post on first-job advice.

Indeed, that was but a taste of the surreal environment this young woman lives in… an all-too-typical example of female hypergamy shagging mangina empowerment. We begin with an article from Forbes magazine… honestly, even Forbes couldn’t read between the lines?

1. Send at least one cold email.

I love sending cold emails because I believe it is one of the most effective ways to meet people you admire. … My senior year of college, I emailed one of the most renowned venture capitalists in the world. I wanted to ask his advice on which of my two job offers (Product Marketing Manager at Google, or an Analyst at another venture capital firm) I should accept, given that I wanted to start my own company within a few years. I knew he had worked with lots of top entrepreneurs, so I valued his opinion on which of the roles would better prepare me to start my own company.

As you may have expected, he answered my cold outreach. He told me to take the job at Google because he thought that the operating experience I would get there would be incredibly valuable later on.

No way would a sane person have expected that cold outreach to work. I’m guessing there were boob pics attached to her e-mail. Her first job out of college was management at Google? Either they’re drastically inflating the job titles of their serfs or, yeah, boob pics. Top-status industry celebrities rarely have time for male undergraduates but attractive young girls are different.

How many college seniors with useless majors have two job offers before they graduate?

3. Take a class that teaches a practical skill.

I’m not saying you need to major in something practical; however, I think it’s essential you take some practical skill classes – such as computer science, writing, negotiation, or more – because it will pay off dividends later on.

Start a blog, a comedy group, a conference, a club, or even a business this year! I have three main reasons why I believe that college is an ideal time to start something:

Why would you attend college in order to start a blog, a comedy group, a conference, a club or even a business? And yes, she meant resources in the “free donations” sense, not in the “your tuition paid for this equipment” sense.

As I’ve mentioned, I wanted to learn more about entrepreneurship in college. As such, I went through the list of business classes at Penn and found a very highly-rated professor who was teaching entrepreneurship. Even though his courses were only open to MBA students, I didn’t let that stop me: I waited outside of that professor’s office and explained to him how impactful his course would be for my career. After lots of back and forth emailing with the MBA administration, my persistence worked, and they eventually let me in!

Not only was his class fascinating, but I developed a strong relationship with this professor during office hours as well. He even helped me refine a business plan that would one day become WayUp.

Make it a point to develop a relationship with a professor you respect. They might lead you to something that will change the course of your entire career.

Go on a road trip with friends, or study abroad for a semester! I interned in Tokyo my sophomore summer at a finance firm. It was because of this experience that I learned I wanted to work abroad when I was older.

Lucky for the highly-rated professor, she had this adventure before opting for a spermjacking. 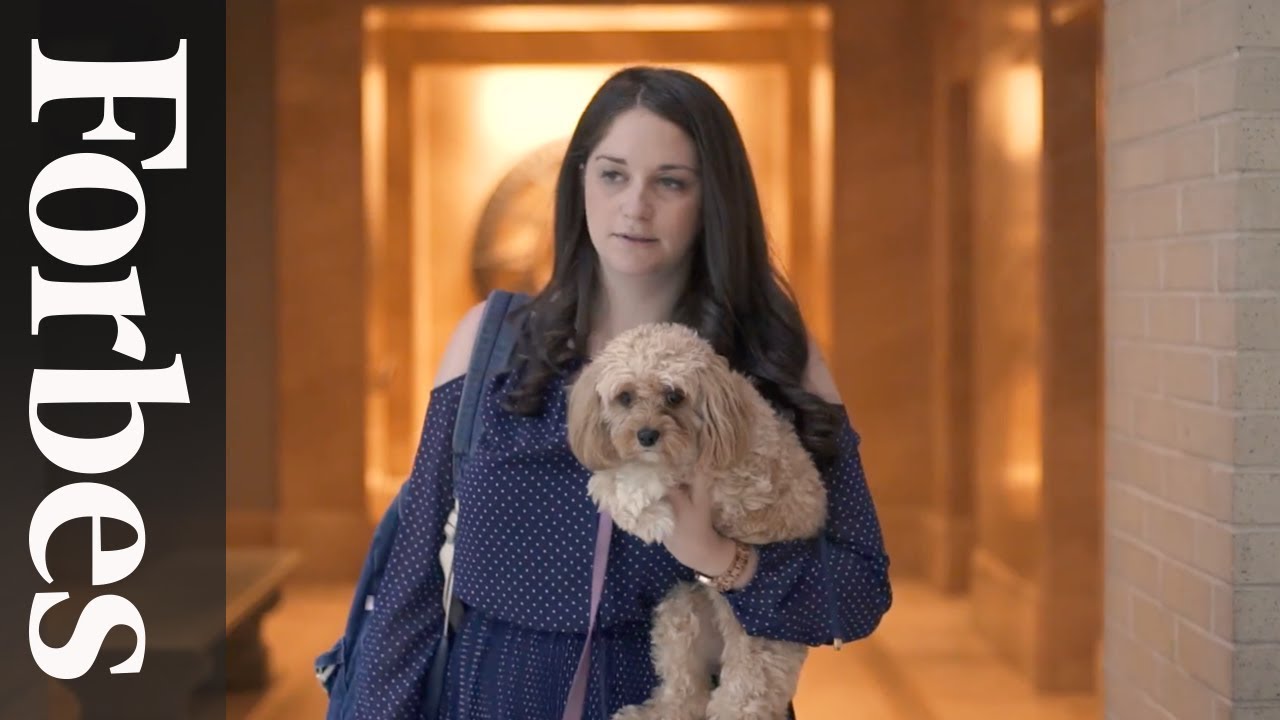 She has nice hair but I failed to find any boob pics. Nice manjaw. I think she was age 27 in this picture… life is riding her hard, to judge from her eyes and emotional support animal.

Next, she describes landing her own first job with Business Insider:

And so I told Google, “Hey, I would love to take this job. I know I can crush it for Google and I really believe Google’s the right place for me, but in a couple years I’m going to want to leave and start my own company. Is that okay?” And they said, “More than okay. The program that you’re applying to, you can totally complete the program after a couple of years, obviously we would love for you to stay at Google, but if you want to go off and start another company, as long as it’s not competitive to Google, we’re happy.” So …

So yeah, hiring managers are all about training up people that they know don’t want to stay around for longer than their training. Was the hiring guy hoping for an NSA relationship? Did the HR hens think she’d be a valuable addition to the gossip vine? Maybe they just needed to make Diversity Quota and didn’t care at all if she did real work.

What is WayUp, anyway? From Crunchbase:

Liz Wessel is the Co-Founder and CEO of WayUp, the leading marketplace for college students and recent grads to get hired. Founded in July 2014, WayUp is a venture-backed startup based in NYC, and was named by CNN as one of the 30 most innovative companies changing the world. WayUp’s users represent over 5,300 campuses in the U.S., and WayUp has worked with companies of all sizes — from startups to Fortune 500’s like Google, Starbucks and Disney. Liz has been featured as one of Forbes’ 30 Under 30 and has been named one of the 18 Coolest Women in Silicon Valley. Prior to founding WayUp, Liz worked at Google as a Product Marketing Manager in California and then in India.

A startup personality cult masquerading as a glorified job board. Sigh. A young woman who majored in socializing and convinced several high-status men to give her advantages just because she… asked nicely?.. is making a dream job of telling college grads how to get employed without her ever having been an employer herself.

Mizz Wessel is doomed. Once she hits the Wall–you can see it coming in the pic–all her benefactors will dump her for the next hawt twat, her professional life will crater, no man will wife up her worn-out, frog-lipped bitch face and she’ll death-spiral into just another hate-fueled feminazi.

Patriarchy could have saved Wessel from this. Had she been pushed into SAHM, right now she’d be painting toenails with her friends while taking turns watching the kids in the playground. But no, she’s too busy jet-setting between India, Tokyo, Silicon Valley and NYC to even eat healthy, let alone act feminine in the shark tank of startup venture capital. She indulged her hypergamous instincts encouraged by Original Sin-soaked manginas. Her life is ruined (although she doesn’t realize it yet), some nameless man had to live sexless, the fertility rate is down another notch, empty consumerism is up another notch, more young college grads get bad advice… everything is bad. The only result here is broken lives. I’d say she was taking a man’s job, too, except her “one of the 30 most innovative companies changing the world” is Grrlpwr Jobz.