…It’s not the children who are leading you.

The Parkland shooting is turning out to be a proud production of Orwell Was An Optimist. A trivial school shooting morphs literally overnight into an emotionally charged political movement to ban all firearms in the United States that has been immediately embraced by hardline Leftists and soccer moms everywhere.

To politicians who hate and fear the well-armed people they lust to enslave, every school shooting is unquestionable proof that they must disarm everybody but their personal bodyguards for the good of all humanity. Never mind that mass murderers tend to be seriously deranged morons that the police knew about for a long time rather than middle-aged guys with careers and ideas of liberty & self-rule. Result, it looks like politicians and fatherless screwballs are acting in concert but it’s actually just political opportunism.

But that isn’t what is happening here. These kids, led by a couple freaks that could easily become shooters themselves someday (see below), organized a solitary, preventable incident into a well-funded national movement in mere days. This is not what emotionally traumatized high school kids naturally do. They did not sit down after a frightening shooting, review history & American civics and come to the well-reasoned, impartial conclusion that the problem was Nick Cruz’s gun rather than Nick Cruz.

They’ve been weaponized by Leftists who probably planned the shooting given local law enforcement’s amazing corruption and incompetence. CNN documents the weaponization process:

Within days of the February 14 shooting, the students made clear that thoughts and prayers were not enough for them — they wanted concrete legislative solutions to the epidemic of mass shootings and an end to the influence of the National Rifle Association.

Yeeeah. Within days of an unexpected incident, ordinary schoolkids wanted “concrete legislative solutions and an end to the NRA”. Because the shooter was Charleton Heston? Because kids killing kids is currently legal? Journalists, we ordinary Americans are not nearly as stupid as you want to believe.

They engaged with the media

National news outlets descended on Parkland to cover the shooting. They found survivors willing to relive the most terrifying moments of their lives and connect them to policies on gun violence. 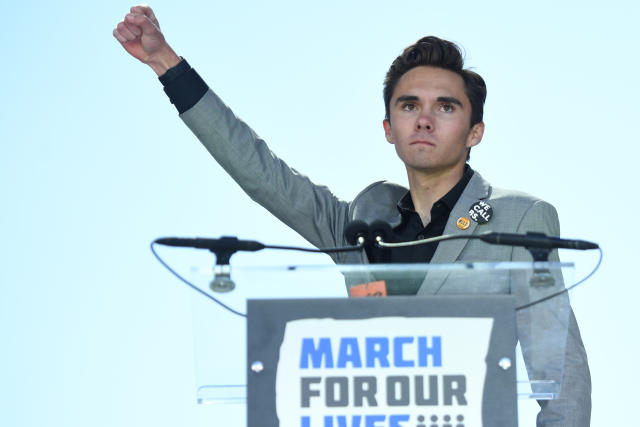 David Guyton Hogg, mugshot for arrest of meth/cocaine possession at age 26 in 2016. (Photo: Anderson City PD, SC). Aspiring broadcast journalist, you say? He’s certainly going to the right parties. By the way, his father is reportedly an FBI agent.

Emma Gonzales, genetic female and proud champion of sexual perversion. I would not trust her to use the correct bathroom, let alone to lead schoolkids… except into a panel van.

Pro-tip to the slow class, any woman who shaves her head bald is sexually damaged beyond all hope. Androgyny is a work of the devil. God made us male & female; Satan made us what the fuck is that thing?

So, this children’s movement is being led by President Fagzealous and a cokehead who is ten years too old to have even been a student at the shooting. In fact, that news just broke:

Another hat tip to Vox Day. He’s been tearing it up lately, ‘it’ being the media’s false narratives. Back to the CNN article:

They announced plans to march

By February 18, the students put everyone on notice: They planned to march for their lives in Washington on March 24.

From the start, they pledged to center students’ voices as gun violence survivors and future voters and invited teens across the country to join them.

Future voters. Oh, somebody is being too honest about their motivations.

The march had three primary demands:
– Pass a law to ban the assault weapons;
– Stop the sale of high-capacity magazines;
– Implement laws that require background checks on all gun purchases, including online and at gun shows.

What a coincidence that this group of concerned students just happened to decide upon the exact same agenda that adult gun-banners have been pushing for 30+ years. The kids are obviously reading someone else’s script. “No more guns in schools” would have been a plausible campaign. Even “No more boys in schools” would’ve been plausible. But “register all gun show purchases”? Would the shooting not have happened had we known whether Cruz had purchased his guns at a gun show? For pity’s sake, this blog knows where Cruz got some of his guns. No central registry of gun owners needed.

A GoFundMe campaign to support the rally raised more than $1.7 million in three days on top of $2 million in private donations from Hollywood personalities including George and Amal Clooney, Oprah Winfrey, Steven Spielberg and Jeffrey Katzenberg.

People are such emotional sheep. “Oh, those poor little kids” *donate donate donate*. Out of curiosity, did any pro-gun Hollywood personalities donate? Oh, that’s right, the last one was Tom Selleck.

They built excitement through small victories

While some shooting victims were still hospitalized and funerals were beginning, students boarded a bus to the state capitol for a lobbying day. …

On March 14, one month after the shooting, scores of students across the United States walked out of class to honor the 17 victims and make sure that calls for change take into account the broader context of gun violence.

More than gun control agitprop, I wonder if the Parkland shooting was staged as part of a coordinated effort to mobilize schoolchildren for political exploitation. Leftoid exploitation only, of course. It’s the Marxists and parasites who use children as human shields and mouthpieces, twisting their innocence and inexperience for the most selfish of purposes. They are how a loving God could build a place like Hell.

As #NeverAgain supporters set their sights on the Washington rally, partner organizations stepped up.

And there it is. The Leftoid puppetmasters who arranged the Parkland shooting come out of the closet to claim their reward. Fresh voters with fresh sob stories.

Children and young adults lack the maturity, self-reliance and experience to be meaningful participants in civic government. Public schools are certainly not teaching them well enough to allow a head start. Therefore, whenever you see a “student movement” or busload of student protesters, ignore the kids and look at who’s pulling their strings. Hint, you’re looking for an atheist because those who fear God fear to exploit children for selfish gain.

A closing thought, I don’t agree with conservatives that arming teachers is a good idea. If teachers need guns to protect themselves from the children they teach then they have failed as completely as a teacher is able to. Shut down public education. It’s doing far more harm to kids than good and now, it’s being turned into the Hitler Youth.

2 thoughts on “When the Children Lead You”