The insistence upon illegal immigration among California’s ruling elites is proceeding far beyond insanity. Senator Diane Feinstein, up for her sixth term in this year’s midterm elections, has lost Democrat party endorsement on suspicion that she has not been adequately supportive of sanctuary city policies in the past.

The California Democratic Party rebuked its senior senator early Sunday by declining to make an endorsement in the state’s U.S. Senate race.

The backing of 60 percent of the delegates was needed to secure the party’s official endorsement.

In a statement following the vote, de León hailed the result as “an astounding rejection of politics as usual,” one that signaled growing momentum for his campaign. “California Democrats are hungry for new leadership that will fight for California values from the front lines, not equivocate on the sidelines,” de León said. “We all deserve a leader who will take our climate action to Washington, and will fight each and every day to protect our human and civil rights, our immigrant families and Dreamers, champion universal health care and create good paying middle class jobs.”

The vote is seen as a sign of nagging discomfort among progressives to Feinstein’s centrist and hawkish brand of politics. Her skeptical view of single-payer health care, anti-marijuana stance, and her votes in favor of some President Donald Trump’s nominations to key administration jobs rankled activists at the core of the state’s Democratic Party.

Translation, Feinstein lacks TDS, is not an ethnic minority and thinks gov’t getting into drug dealing is a bad idea. (I always feel a touch of vertigo whenever I agree with a ranking liberal about anything.)

The results were a sign of unrest among many liberals who believe Feinstein should do more to challenge President Trump — and a testament to de León’s insurgent message resonating with the party’s activist left flank. “The outcome of today’s endorsement vote is an astounding rejection of politics as usual,” he said in a statement.

“Activist left flank” means La Raza and similar anti-USA organizations. Feinstein’s challenger Kevin de Leon has ties to La Raza, at one point publicly admitting half his family is illegal and subject to deportation under Trump’s robust policing. Have a link:

It’s tempting to regard this as a sign that the Democrats are now sufficiently anti-white that they’re purging white members but this isn’t the first time Feinstein has been at odds with her party. Mercury News continues:

Losing the party endorsement doesn’t always mean much. When Feinstein ran for governor in 1990, she dramatically declared her support for capital punishment at the state convention, over loud boos from the hall. The party’s delegates endorsed her more liberal rival, Attorney General John Van de Kamp. But Democratic voters as a whole agreed with Feinstein on the issue, and she won the primary that year.

Likely as not, Feinstein will die of natural causes and render this spat moot. She’s 85 and looks like the bride of Darth Sidious: 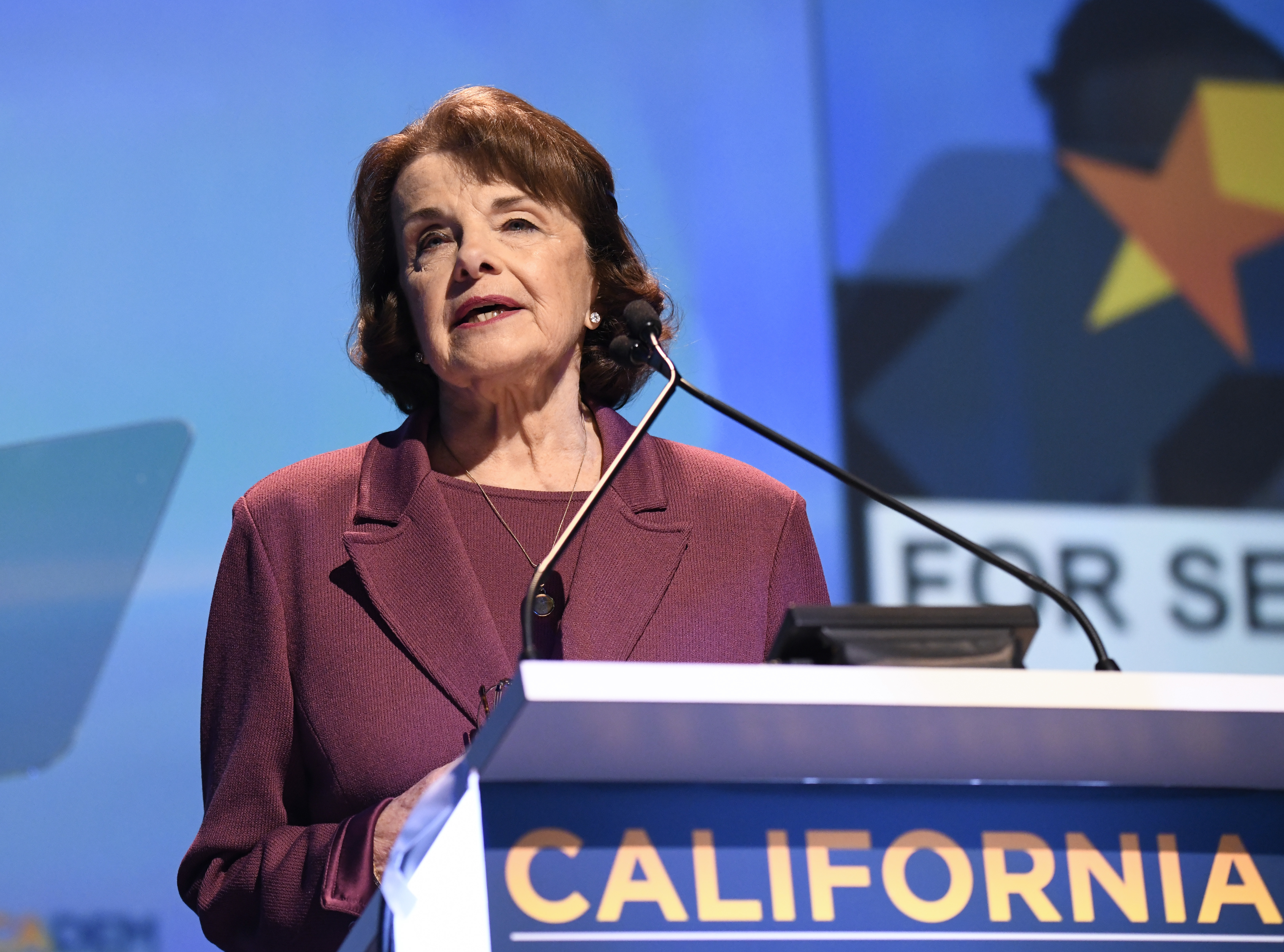 In other news from the Mercury, the sexual double standard is alive and well in Hippietown:

The party also voted to oppose an endorsement for State Sen. Tony Mendoza, who resigned this week amid sexual misconduct allegations and attempts to expel him but is running for re-election. No endorsement was made in his Los Angeles-area district. …

An investigation by independent lawyers hired by the Senate found that it was “more likely than not” that Mendoza, who is married, had subjected six women to unwanted sexual advances.

The party did endorse Assemblywoman Cristina Garcia, who is on leave during a separate investigation into sexual harassment allegations against her, including that she groped a male staffer. The endorsement was made at a local caucus before the allegations went public, and unlike in Mendoza’s case, Democratic Party regulations gave delegates no option to undo it.

She rapes men and there’s nothing anybody can do to punish her… ooookay. Midterms gonna be interesting. Not for the outcomes, which will be predictably polarized, but for the backstabbings on the way.

One thought on “Diane Feinstein Now Too Conservative for Democrat Support”